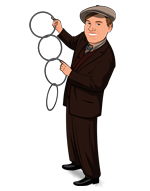 Today, when you order "Lavand By Michael O'Brien", you'll instantly be emailed a Penguin Magic gift certificate. You can spend it on anything you like at Penguin, just like cash. Just complete your order as normal, and within seconds you'll get an email with your gift certificate.

In memory of the great Rene Lavand.

"Lavand" is an extremely clean and practical four card oil and water type effect. The magician shuffles the four cards together, mixing up the colors. However, under seemingly impossible conditions, the cards continue to separate, keeping the red cards together on one side and the black cards together on the other.

Each phase gets seemingly more and more impossible culminating with the climax, in which the spectator deals the cards and even separates them themselves!

Just 100% sleight of hand, a fun packet effect, and a new take on a classic plot in magic!

Like it Report this review
Verified buyer Pro Privacy ON (login to see reviewer names) on April 2nd, 2019
A good routine.

I'm six months into taking up magic and liked that I could already do the first two phases.

The second phase seems to get the best reactions for me. Could be because I'm not as confident with the last sleight, or maybe that the cards seem to stay facing down longer than the second phase.

Either way. It was totally worth the money for me, and I like it more than the rest of the Oil and Water routines I've come across here.
1 of 1 magicians found this helpful.
Did this review help you? Do you want to respond to this review?

Great trick and worth downloading Report this review
Verified buyer Pro Privacy ON (login to see reviewer names) on December 25th, 2020
One thing I enjoy with Lavand is it uses only 4 cards and is a nice lead in to Dr Daily's Last Trick.It is not an overly long and drawn out Oil & Water trick like others I have watched.
It is well explained and not knuckle busting.
Michael O'Brien, thank you for releasing this to the magic community.
Did this review help you? Do you want to respond to this review?

For worker...I love! Report this review
Verified buyer Pro Privacy ON (login to see reviewer names) on November 3rd, 2018
The quality of the work is good.
All impromptu and possible for stand-up work.
Very low price.
Perfect!
Did this review help you? Do you want to respond to this review?
Bestsellers