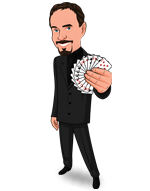 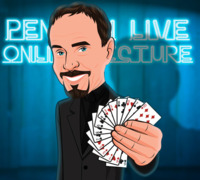 Today, when you order "Brian Gillis LIVE", you'll instantly be emailed a Penguin Magic gift certificate. You can spend it on anything you like at Penguin, just like cash. Just complete your order as normal, and within seconds you'll get an email with your gift certificate.

A favorite at the Magic Castle and A-list parties all over Hollywood teaches you how to amaze, up close and personal! SUPPORT LIVE MAGIC. DOWNLOAD THE FULL LECTURE TODAY.

"As a magician who wants high impact from their magic I think you need to always be a few steps ahead of them. When you see Brian work you can tell he's ahead of the audience by a mile. Or at least you can tell after he's amazed everyone in the room including yourself" - Jon Armstrong

"Brian Gillis's fast-paced style consistently elicits screams and laughter in every room that he works at the Magic Castle. He fools them, but more importantly, he totally entertains them." - Jack Goldfinger

"Brian Gillis is one of the greatest sleight of hand artists alive. His style is fast paced magic mixed with great comedy creating a show that never fails to destroy an audience. I'm with Johnny Carson "Brian Gillis is my favorite magician" - Chris Randall

"Brian Gillis performs for so many A-list celebrities that he should carry a red carpet everywhere he goes." - Gregory Wilson

"Every time I've seen Brian Gillis work, he leaves his audience in astonishment. His sleight of hand is flawless and gutsy." - Dana Daniels

Coins travel from hand-to-hand faster than anyone can see.

Several people peek at cards and, after someone thoroughly mixes the deck, the thought-of selections appear one-by-one in the strangest ways.

The world's fastest sponge ball routine complete with an explosion of two dozen, or more, balls at the end.

Brian Gillis and Sisuepahn (pronounced Sis-sue-pawn) have fascinated and stunned audiences with sleight-of-hand, mind-blowing mentalism and impossible feats of "body magic" for over a decade. Inspired by his remarkably accurate and highly entertaining fortune-telling grandmother, Brian took up magic as a hobby as an undergrad.

After college, he taught Psychology before his transition to full-time magician, having apprenticed under the great Eddie Fechter, a man considered to be one of the greatest close-up magicians of all time. Brian was named "World's Best Close-Up Magician for the New Millennium" on the television special The World Magic Awards.

Laotian-born Sisuepahn, known as the "Lady of Magic," displayed a natural flair for playfulness and puzzle-solving at an early age, and has since spent thousands of hours researching and practicing mystical techniques of mind-over-matter, unseen for decades. Combining her assiduous research with techniques taught to her by one of the greatest mentalists of the century, Eddie Fields, her total mental and physical control allows her to perform completely inexplicable physical feats. From competitors for the title "World's Strongest Man" to a 10-time world champion power lifter, Sisuepahn has proven to be impossible to lift when she imposes her will to be immovable. Her mysterious ability leaves audiences flabbergasted and howling with laughter.

If you've never been to a magic lecture, there's never been a better time. Sunday, November 27th, at 7:00pm, we're streaming Brian Gillis LIVE in a spectacular 2-hour online lecture. Watch and learn things you won't find in any book or DVD.

Not your hipster's lecture Report this review
Verified buyer Pro Privacy ON (login to see reviewer names) on December 6th, 2016
Brian does a few things incredibly well. If you are looking for dozens of new tricks that haven't made it out into the light of day, this is not the lecture for you. If on the other hand, you are looking for tips and help from a person who has come close to perfecting what he does, this is your holy grail.
Brian has done this stuff thousands and thousands of times. He has done it surrounded, with hecklers, drunks, and in every conceivable situation. His work is pure gold. If you're a guy who collects tricks and wants more and more, don't get this. If you want the real work on solid entertainment, buy this now!
4 of 4 magicians found this helpful.
Did this review help you? Do you want to respond to this review?

Solid Material Report this review
Verified buyer Pro Privacy ON (login to see reviewer names) on December 6th, 2016
Tough going at first, as Gillis assumes WAY too much about what viewers need to know when he explains the workings of the various effects. I caught his lecture at the IBM in San Antonio six months earlier, and the questions from the audience kept him from glossing over details. In this lecture, the questions are slow in coming at first, and Dan Harlan has a tough time getting details out of Gillis. But as the lecture progresses Gillis gets into the groove and the explanations are richer. He even backtracks and gets details missed earlier. So it all works out as far as presentation, eventually. But what earns all the stars here is the FIRST-RATE, commercial material. He's made a career from what's in this lecture, a career that's lasted decades. This is gold. Cards, coins, sponge balls--a pocketful of props and you can travel the world and make a living doing what you love.
4 of 4 magicians found this helpful.
Did this review help you? Do you want to respond to this review?

A Master of His Craft Report this review
Verified buyer Pro Privacy ON (login to see reviewer names) on December 4th, 2016
I've seen tons of Brian's performances on YouTube and was ecstatic to see he was doing a Penguin Live lecture. This is the repertoire I've wanted to see explained for years, and I was not disappointed.

I don't think Brian does many of these types of lectures, as can be seen when he is presenting (more in that he has years upon years of practice and probably has never had to explain his effects, so some of the details are missed upon on the first pass), but Dan Harlan and the audience members ask the questions I would have asked which clarified everything I wanted.

Other than that, this lecture was solid!
3 of 3 magicians found this helpful.
Did this review help you? Do you want to respond to this review?

Brian Gillis LIVE Report this review
Verified buyer Pro Privacy ON (login to see reviewer names) on December 6th, 2016
Huge. This is the lecture I’ve been waiting for! I’ve admired Brian Gillis for decades. His solid magic and crisp execution is real world and spot on.
A big thank you to Brian Gillis and Penguin Magic for bringing this lecture to the magic community. Thanks also to Dan Harlan for a superb job hosting.
Please bring Brian Gillis back for a second lecture!
2 of 2 magicians found this helpful.
Did this review help you? Do you want to respond to this review?

brian gillis Report this review
Verified buyer Pro Privacy ON (login to see reviewer names) on December 12th, 2016
A mature performer worth watching.Fast paced. Takes the ordinary and makes it interesting.Covers cards and coins and mentalism.I will watch it again to catch what I missed
1 of 1 magicians found this helpful.
Did this review help you? Do you want to respond to this review?

Good show thanks t Dan Report this review
Verified buyer Pro Privacy ON (login to see reviewer names) on December 10th, 2016
Brian is so wedded to his presentation from years of performance that he is not, on his own, a very good teacher. Dan kept slowing him down and participating at the appropriate time that the lecture turned out informative. As a team Brian and Dan give a fine lecture
1 of 1 magicians found this helpful.
Did this review help you? Do you want to respond to this review?

TOP TIER WORK Report this review
Verified buyer Pro Privacy ON (login to see reviewer names) on December 10th, 2016
Great routine in this lecture! If you like close up or not im glad to of been able to see it live and here. Amazing effects.
1 of 1 magicians found this helpful.
Did this review help you? Do you want to respond to this review?

Brian is the pro. Report this review
Verified buyer Pro Privacy ON (login to see reviewer names) on April 13th, 2018
There are some areas of this lecture where Dan Has to prompt further explanation, but there is so much usable material in this download. It is easily one of my favorite lectures.

Adapted the sponge routine into a longer set, performed to music, and I use it as my opener. Reactions have been fantastic.
Did this review help you? Do you want to respond to this review?

Highly Recommended! Report this review
Verified buyer Pro Privacy ON (login to see reviewer names) on March 6th, 2017
Brian Gillis is a great performer with a lot of practical experience! You can tell that all of the routines discussed in this lecture have been road tested for many years. Thoroughly enjoyed it! ;)
Did this review help you? Do you want to respond to this review?

On the top Report this review
Verified buyer Pro Privacy ON (login to see reviewer names) on February 13th, 2017
If I read about Brian Gillis, I read only great things!
When you see the lecture, you will know most of the tricks,but you have allways the feeling he is doing something better! He is so direkt and with so much force, that you can only relaxe and enjoy it.
The only wish I had, is that Mr. Gillis is a better teacher, but I was also surprised in the interview section, how nice and friendly he is as the privat person! Thanks Mr. Gillis
Did this review help you? Do you want to respond to this review?
Bestsellers