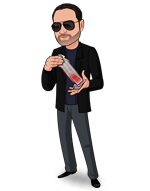 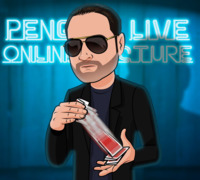 Today, when you order "Jonathan Friedman LIVE", you'll instantly be emailed a Penguin Magic gift certificate. You can spend it on anything you like at Penguin, just like cash. Just complete your order as normal, and within seconds you'll get an email with your gift certificate.

“Jonathan's inventions are so varied and eclectic, everyone will find something they'll want to use!” - Jack Carpenter

"Jonathan Friedman’s magic is right up my alley: quirky, engaging and, best of all, real world!" - Cameron Francis

“Jonathan is a breath of fresh air in a magic world filled with boring derivatives. With his off-the-wall ideas and presentations, I can't wait to see what he'll come up with next!” - Caleb Wiles

"Jonathan Friedman is one of magic's rare throwbacks to the Eighties ... and that's a massive compliment. His magic is visual, clever and fully routined, just as we saw from the likes of Daryl, Paul Harris and Jay Sankey when they hit the scene." - Andi Gladwin - VANISHING INC.

Word Search and Destroy A famous band is mentally selected from a group of ten. Through a process of elimination, the correct band is revealed by writing down a list of all of the non-selected acts. After showing that this list resembles a classic word search game, the thought-of band is also seen to be running diagonally through the other nine. Featuring “The MixMaster Force”.

School of Rock This one has it all! Get ready for a mental predicting, ink-morphing, card-transforming, four-of-a-kind producing extravaganza of epic proportions. And all of this while learning a thing or two about the history of Rock and Roll. A special bonus: A glorious four-of-a-kind production by legendary card god Jack Carpenter is taught as well.

George and Abe A six-phase (yup, that’s right) penny/quarter transposition with an impossible kicker ending that resets every time that you perform it. Featuring “The Arcade Vanish”, and “The Up and Over Vanish”.

Bee Gee Wiz Disco is definitely not dead. Prove it with a very unusual display of quasi-mathematical ability that is built entirely around the giant catalog of hits by The Brothers Gibb.

Bad Band Tattoo The ultimate in band favorite dedication! A selected band to be featured as your “new” tattoo is selected. A predicted photo of the tattoo is shown to be incorrect. No worries as the selected act is finally revealed by impossibly morphing the wrong tattoo into the right one, piece by piece!

Ice Ice Baby A novel yet methodologically-sensible way to “cook” up an ice cube using the usual ingredients. A business card, ink, and some fire.

Material Girl Magically separate the reds and blacks from a shuffled deck in a flashy fashion with a killer kicker finale. Yes, you can look like the card god you have always wanted to be with almost no work whatsoever. All of this while also learning how to “get lucky” and land the object of your desire.

The KISS Theory A dollar is wagered on the success rate of a shuffling exercise built around the “hardest-working band in show business”, KISS. Through a rock and roll spelling exercise, the audience-chosen members of the band are each correctly dealt to from a mixed-up packet. In celebration, good ol’ George on the dollar bill visually transforms into his favorite member of KISS...classic makeup and all.

Jonathan Friedman is a professional ‘musician-turned-magician’ with over twenty years in the biz’. His original material has been published in both GENII and MAGIC, as well in the digital magic magazine VANISH, where he contributes his own monthly column “Throwing Shade”. As an author, his “The 80’s Called...They Want Their Magic Book Back Vol. One” garnered rave reviews across the board, as well as winning the 2015 Vanishing Inc. “Trickie” Award for Best Magic Book.

Jonathan’s brand of quirky close-up gets tested daily while he works as a demonstrator at one of the busiest magic shops in the land, Market Magic Shop in Seattle, WA. Currently at work authoring a new hardback collection of his most musically-magical (or magically-musical) close-up creations, Jonathan is ecstatic to get the opportunity to step out from the magical underground and share his goods with you through the Penguin Live experience!

If you've never been to a magic lecture, there's never been a better time. Sunday, December 4th, at 7:00pm, we're streaming Jonathan Friedman LIVE in a spectacular 2-hour online lecture. Watch and learn things you won't find in any book or DVD.

GREAT LECTURE! Report this review
Verified buyer Pro Privacy ON (login to see reviewer names) on December 10th, 2016
I am a huge fan of Jonathan's book, "The Eighties Called and They Want Their Magic Book Back." I was excited to see him featured on Penguin Magic. Like the book, the lecture is filled with "workers." There are complete routines, as well as great utility moves taught here that can be used in your own routines. The Arcade Vanish is a coin sleight that I have put to use in my own coin routine, and is a gem of a move. There are so many great reasons to download this lecture. I recommend it highly.
Did this review help you? 1 comment

An Exellent, albeit unpolished, lecture of new ideas and unusual reveals Report this review
Pro Privacy ON (login to see reviewer names) on December 7th, 2016
A lot of the magicians who do Penguin Live Lectures have been traveling and touring with that lecture for months, sometimes years. As such, their lectures are polished and perfected. They know everything they are going to say, as the lecture has become as well-rehearsed and honed as the performance itself. Jonathan is not a touring lecturer (yet); in fact, I've heard that this was his first lecture ever, so it honestly doesn't have that polished finish that those touring magicians' lectures have.

But have no concerns, because the *content* he's teaching is exceptional!

He doesn't simply show the same old tricks with a new facade, as so many lecturers do (seriously, how many times can we learn the same thing with a new script?!?). Instead, he's sharing new ideas, and showing us that it is absolutely possible to create something new, with new plots and new subjects, instead of just rehashing and regurgitating the same ol' same ol'. And the way he incorporates his love of music into his magic is a creative blast that we just don't see in so many of these lectures. Everyone can learn something from that! His reveals are of particular interest, and he even suggests that he thinks it's his forte.

He also has a few really cool original moves that caught my eye. While watching, pay close attention when he talks about his 'Arcade Vanish' and the 'Bare-Handed Trashcan Production,' as well as a cool move called the 'Slap Trap.'

In the end, this is an excellent lecture. I'm giving it 4-stars for content, but it's not getting the fifth star because it's not yet polished the way it will be once he does the lecture a hundred times. Although, to be fair, I also heard a rumor that he was fighting the flu and under the influence of some cold-&-flu meds when filming it, but you can't tell at all, which makes the rest of the lecture all that much more impressive. (For what it's worth, I have only given one or two 5-star reviews, ever. I save those for *perfect* products; so 4-stars from me is still an *excellent* rating!)

[Full Disclosure: I was given a free review copy of this lecture, but was neither asked, nor made promises, about the content of my review.]
Did this review help you? 1 comment

I loved this lecture! Report this review
Pro Privacy ON (login to see reviewer names) on December 7th, 2016
It's got a lot of fresh presentations, and great effects. I also really enjoyed that there are a lot of non-card tricks, there's a trick with guitar picks, a picture of tattoo, and the card tricks don't really feel like card tricks.

Jonathan has some great work on hiding words inside words, which always makes for an surprising way to end a trick.

My personal favorite thing is Slap Trap which is very visual production of a card, and is going right into my "toolbox" of card revelations.
Did this review help you? 1 comment

Very inspirational! Report this review
Verified buyer Pro Privacy ON (login to see reviewer names) on November 27th, 2016
I live just outside Nashville, TN and spent 15 years of my life playing in rock bands...and I can't for the life of me understand why I never thought to combine my two favorite things! I was so inspired with this lecture tonight...not only with the material itself, but also with his creativity. Jonathan's originality showed through in ever effect.

Great lecture!
Did this review help you? Do you want to respond to this review?

First of all, "Word Search and Destory", the theme and concept is fine...but the "MixMaster Force" just doesn't look natural. Yes, it is better than the hot rod spelling force, but it's still not good. The classic double sided pick, to have the spectator drops the pick on the table, and remove the face down one just looks so much cleaner. Or you can use the method in Max Maven's "Nothing" DVD to force one, either way it's better than "MixMaster Force"

"School of Rocks", the way he performed it, just make it looks like he failed predicting Spectator'a thought of band, and just trying to cover it up with bunch of card tricks. Wrong premise given in the beginning for spectator to expect. Say if you wanna take a chance of hitting, when you fail, at least makes it look like it's a gag on purpose or light hearted joke. It just look awkward the way it's presented.

"George and Abe", many sleight are used in this routine, but the sleights aren't chosen correctly, there are many sleights to choose from that can make the routine much more natural and clean. The shuttle pass was a poor choice of solution for the transposition effect, for example, a "pointing transfer" will look way better as a solution. The sleight where he "pushing the thumb in" just doesn't look good, of course it can fly in the real world, but there are much better choice of sleights out there......

After watching these 3 effects just pissed me off, because with the advanced of technologies, we get to learn so much about magic and we can get any information we want. This is ART of magic going backwards, not forward, I'm pissed off and I can't fisnishing watching the rest of the lecture!
1 of 5 magicians found this helpful.
Did this review help you? 1 comment
Bestsellers