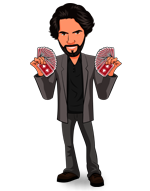 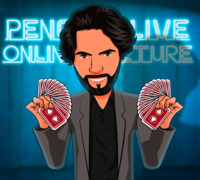 Today, when you order "Kiko Pastur LIVE", you'll instantly be emailed a Penguin Magic gift certificate. You can spend it on anything you like at Penguin, just like cash. Just complete your order as normal, and within seconds you'll get an email with your gift certificate.

“Kiko is for me the essence of poetic sensitivity in magic. And the originality in their tricks, acts and magical-poetic-musical shows” Juan Tamariz

“When wit, talent, creativity, sensitivity and experience is mixed, we can not expect any other result than that offered by this little genius Kiko. We’re in luck!” Dani DaOrtiz

"If the challenge is the driving force of art, Kiko defies cardmagic. It is very difficult to see, such as pure and organic, a magic that only the timeless quality and risk can achieve." Miguel Angel Gea

A simple proposition involving two pills, one red, one blue. The magic begins when the red pill vanishes from his closed fist.

Simply blow four cards out of the deck in various strange ways to discover they are the four aces.

Someone chooses an aces and you find all the cards of its suit in order even though the deck has been shuffled. After completely this incredible task, all the cards change to a different suit.

The magician and his helper act as mirror reflections of one another, both performing the same actions, to each produce a four of a kind.

One of Kiko's signature pieces, he recites a beautiful story filled with captivating images as the cards change to match.

His version of open travelers using no extra card, but a very important invisible assistant who holds the final ace.

And, you'll learn an incredible version of collectors where three chosen cards, clearly placed into the deck, appear between the aces some distance away.

Plus, a beautiful ace assembly with no gimmicks, an impromptu invisible deck with a borrowed pack, and so much more.

Kiko Pastur is an illusionist from Spain. Creator of magic shows, books and lectures worldwide. His style is marked by a challenge to the imagination, the purity of the means and innovation in the art of magic. He has worked on projects such as Neuromagic, Jornadas of Escorial, NadaxAquí (Channel 4 TV in Spain), TEDx talk, and has chaired the Spanish National Magic Congress in A Coruña 2010. Winner of several national awards (CMN Almería 1999, San Sebastián CMN 2002 Almussafes 2005 and 2007) and international (FFAP Arcachon 2006 and 3º prize cardmagic in FISM Stockholm 2006)

If you've never been to a magic lecture, there's never been a better time. Sunday, January 15th, at 7:00pm, we're streaming Kiko Pastur LIVE in a spectacular 2-hour online lecture. Watch and learn things you won't find in any book or DVD.

Really great, visual Report this review
Verified buyer Pro Privacy ON (login to see reviewer names) on January 28th, 2017
Incredible lecture. The "No Time, Only Images" routine was beautiful. Great subtleties and in-depth explanation of his thinking throughout.

Also, even though it is clear that English isn't a strong language for him, I didn't find language to be an issue at all. The reviewer who gave it one star because of that might have gotten too caught up with that to appreciate how magic cuts through language - even in teaching and explaining. Dani Daortiz and Miguel Angel Gea have done multiple Penguin lectures each and they were fantastic. Kiko's English is better than both of theirs. He just has a more subdued personality
6 of 6 magicians found this helpful.
Did this review help you? 1 comment

Outstanding Visual Card Magic Report this review
Verified buyer Pro Privacy ON (login to see reviewer names) on January 19th, 2017
I had never heard of Kiko Pastur before this lecture and took a chance to see him. I had the pleasure of watching him perform and lecture live in the studio. Don't let the opening performance with the pills turn you off, it didn't do much for me, but the idea was to convey putting his audience in a dream like state. The rest of the evening was however a dream filled with high quality elegant magic that is amazing and entertaining. Kiko is a master and artist with a deck of cards. There are lots of routines and techniques crammed into this lecture for the intermediate to advanced. Best of all the lecture is 5 hours long so you really get value for your money. I'll be watching out for Kikos work in the future.
6 of 6 magicians found this helpful.
Did this review help you? Do you want to respond to this review?

Incredible! Report this review
Verified buyer Pro Privacy ON (login to see reviewer names) on January 19th, 2017
This is one of the best lectures I have ever seen! Kiko is an artist in every sense of the word. This lecture is filled to the brim with wonderful material, and invaluable theory. Do your magic a favor, STUDY THIS LECTURE!
5 of 5 magicians found this helpful.
Did this review help you? Do you want to respond to this review?

One of the best lecture Report this review
Verified buyer Pro Privacy ON (login to see reviewer names) on January 15th, 2017
Kiko Pastur lecture is one of the very best I have seen.
4 of 4 magicians found this helpful.
Did this review help you? Do you want to respond to this review?

Great lecture, amazing performer! Report this review
Pro Privacy ON (login to see reviewer names) on February 11th, 2017
This guy has it all, the technique, the well thought of routines and the perfect presentation.
The mirror routine is genius, and it is almost self working!
The card productions of the suit apparition are awesome, for sure you will add quite a few to your repertoire.
You will learn a lot of good routines and moves here, but the best part are his explanations about why he uses certain techniques or misdirection at some points of the routines. He even explains several variations depending on the context and level of dexterity. Deep thinking here, inherited directly from Ascanio and Tamariz.
Overall great value in this 5h lecture. If you like impromptu card magic this is a must have.
3 of 3 magicians found this helpful.
Did this review help you? Do you want to respond to this review?

Kiko Report this review
Pro Privacy ON (login to see reviewer names) on February 3rd, 2017
I saw Kiko's Lecture at Magic Castle recently and we were amazed . His collectors make our jaws drop ! and he explains it only here ! His English is more than adequate and nobody had problems understanding - so that 1* review by somebody should be disregarded .. All-around great guy and exceptional card Magus !!!
3 of 3 magicians found this helpful.
Did this review help you? Do you want to respond to this review?

Real artistry Report this review
Verified buyer Pro Privacy ON (login to see reviewer names) on October 5th, 2020
This is one of the best lectures that I have ever purchased. Kiko has truly made his card magic an art form. It was truly a theatrical experience. His methods are unique and some even have discrepencies but he explains his thinking behind him and he's right, it presents as very open.
Did this review help you? Do you want to respond to this review?

Spanish Thinker Report this review
Verified buyer Pro Privacy ON (login to see reviewer names) on August 25th, 2018
I Love the way Kiko interprets magic. He is the poet under the magicians.
I saw him the first time in Madrid.
And this lecture just confirmed this positive impression about him.
If you not just about the Tricks even the little Details in between you can learn a lot.
Did this review help you? Do you want to respond to this review?

Best magician Report this review
Verified buyer Pro Privacy ON (login to see reviewer names) on August 8th, 2017
I think this is the best magician I 've ever seen ( all the Spanish magicians are very very strong) because he think the magic, and the story, not only the moves.
And the best is : just a regular deck of card.....the magic is not only the technique but it's a dream. If you looking Kiko Pastur, watch his eyes, you're a sure that he's love his work.. he's a passionate magician. Long life to Kiko Pastor !!!!!!
Did this review help you? Do you want to respond to this review?

Kiko Pastur LIVE Report this review
Verified buyer Pro Privacy ON (login to see reviewer names) on October 14th, 2018
Fabulous! Stunning, beautifully imagined magic by an artist who has reflected deeply on magic as a performing art. There are 11 brilliantly conceived original card effects, each with meticulously detailed explanations, and an illuminating interview by Dan Harlan to conclude the tape. This is material to study, savour and build upon. I believe it will certainly up my game - help me to create the enchanting card magic I always thought was possible, but was never able to break through to achieve - not like this. Bravo also to the Spanish school for fostering an artist of this calibre - as for so many other great artists Spain has produced.
0 of 1 magicians found this helpful.
Did this review help you? Do you want to respond to this review?
Load more reviews
Bestsellers