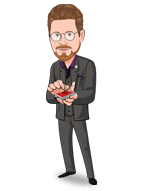 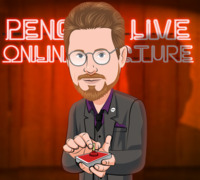 Today, when you order "Jon Armstrong LIVE 2", you'll instantly be emailed a Penguin Magic gift certificate. You can spend it on anything you like at Penguin, just like cash. Just complete your order as normal, and within seconds you'll get an email with your gift certificate.

"By any standards, Jon is one of the finest magicians and entertainers you could possibly learn from. What Jon doesn't know about entertaining people with magic -- and earning a good living into the bargain -- isn't worth knowing. This will be a terrific lecture of brilliant thinking and top-class entertainment... don't miss it!" - Ian Rowland

"Jon Armstrong's Magic is a worker's dream! I have seen him devastate audiences at the Magic Castle and other venues. They were laughing and gasping at the same time! As a teacher, his explanations are easily understood. Adding Jon's material to your repertoire will add to your reputation as a great and magical entertainer." - Paul Green

"Jon is the real deal. A voice in magic worth listening to for anyone who wants to improve both their technique and performance." - Ben Seidman

"Jon's dedication, commitment, and passion for the art of creating moments of magic is infectious. As a teacher his magic is clear, clever and fun, not to be missed." - Garret Thomas

"During an Armstrong performance, we can all learn something from a guy who loves what he does, and is simply great at doing it." - Rob Zabrecky

"If Jon Armstrong were a comic book character, he'd be a super knowledgeable sidekick with magical powers that saves the day. Now he's ready to make you the hero as he shares his most powerful secrets, expertly instructing you in how to produce the kind of miracles that have made him a crowd pleasing multi-award winner. If you want to master the superpower to astound and amaze an audience, you want Jon Armstrong." - Bruce Gold

"Jon Armstrong is a masterful entertainer and teacher. Oh, did I mention the exquisite magic he does? Look, listen and learn! You will be thrilled you did." - Peter Samelson

"Jon's magic is strong, commercial and best of all fun." - Asi Wind

"Jon is a wonderful magician: incredibly skilled, funny, creative and entertaining. He brings the same stellar level of ingenuity and craftsmanship to his scripting and routining as he does to his sleight-of-hand. His work directing other magicians is extremely insightful, not to mention generous. Jon makes everything he touches in magic better." - Chris Philpott

Starting A great way to warm the crowd, establish your performing style and change the way people might think about card magic.

Maths The most entertaining card matching routine ever, with a killer ending and laughs throughout

Vanishing Coin and BottleJon treats you to his stand-up routine with a coin and a bottle, seamlessly incorporating two classics into a single surprising piece with a powerful punch.

Large Card Two selections are revealed by a jumbo card that changes from one to the other.

Glass Deck A brilliant routine finding two cards chosen by a couple, while the deck (trapped between their hands) turns into a solid block of glass.

Winner of numerous awards, including Close Up Magician of the Year, Jon Armstrong has brought his amazing skills and magical comedy to prestigious audiences in over 30 countries worldwide.

How can you compete? Report this review
Verified buyer Pro Privacy ON (login to see reviewer names) on March 19th, 2017
Jon Armstrong just keeps getting better and better every time I see him! This lecture is jam packed with ideas, routines and gags that you will use. He is someone who cares so deeply for card magic and it shows because he leaves no stone unturned here. I can recommend this lecture enough!
1 of 2 magicians found this helpful.
Did this review help you? Do you want to respond to this review?

Immediately useful Report this review
Pro Privacy ON (login to see reviewer names) on November 6th, 2019
Jon shows us his transition from a close-up to a stand-up show which he has done incredibly well. An engaging show from start to finish. All the explanations of the effects are very thorough, but more than that, the tips on staging and presentation were immediately useful to me, one of which, with regards to sequencing, I implemented immediately and will never look back. An invaluable lecture to be sure.
Did this review help you? Do you want to respond to this review?

I liked it! Report this review
Verified buyer Pro Privacy ON (login to see reviewer names) on December 23rd, 2018
This was a great teaching DVD by Jon. I highly recommend it. Wonderful effects and easy to do. I especially like the coin and bottle routine. His teaching style and presentation is really fun to watch. And on top of all that he's a nice guy too!
Did this review help you? Do you want to respond to this review?

Jon is Fabulous Report this review
Verified buyer Pro Privacy ON (login to see reviewer names) on December 19th, 2018
Jon manages to teach effectively and have his personality on full display.
Did this review help you? Do you want to respond to this review?

Very Entertaining and Solid Learning Opportunity Report this review
Verified buyer Pro Privacy ON (login to see reviewer names) on February 8th, 2018
This live session is filled with ideas, learning and entertainment which will inspire you!
Did this review help you? Do you want to respond to this review?

Benefit from decades of performances... Report this review
Verified buyer Pro Privacy ON (login to see reviewer names) on September 14th, 2017
The effects Jon discusses are crowd-pleasing miracles, but the true value is dissecting each performance from the POV of a seasoned and polished touring magician.

His insight into why each beat of his performance exists has a value that far exceeds any price associated with the video. For over two hours you step into the mind of one of the most popular working magicians of the modern age.

The last ten minutes is filled with surprises as Jon recounts pitfalls and life experiences that shaped his character both on and off stage.

Watch this video wearing a diaper because the magic and comedy are amazing enough to guarantee your bladder will fail.
Did this review help you? Do you want to respond to this review?

Phenomenal Lecture Report this review
Verified buyer Pro Privacy ON (login to see reviewer names) on March 27th, 2017
This is a lecture for working pros. The material is inspirational. Very direct and powerful effects that you can tell Jon has put a lot of work and effort into. If you are a hobbyist, I'm not sure how much you will get out of this lecture, but if your main focus is on performing clear and impactful effects, you will get a lot out of this lecture.
Did this review help you? Do you want to respond to this review?

One of the finest Lectures I have seen Report this review
Verified buyer Pro Privacy ON (login to see reviewer names) on March 20th, 2017
I have seen a lot of lectures, both on Penguin and in person. This rates as in my top five (up there with Tommy Wonder and Eugene Burger). Jon is clear, well prepared, and the material that he teaches is very, very good. Not only that, but the bits he drops in about staging, directing, and making your material better are gold. Dan Harlan says about a quarter of the way through "that is worth the price of the lecture." Dan should know.
Get this, and you will be a better performer.
Did this review help you? Do you want to respond to this review?

Nice Report this review
Verified buyer Pro Privacy ON (login to see reviewer names) on April 28th, 2017
Very useful material
0 of 1 magicians found this helpful.
Did this review help you? Do you want to respond to this review?
Bestsellers