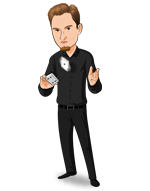 Today, when you order "State of the Act - Chris Beason", you'll instantly be emailed a Penguin Magic gift certificate. You can spend it on anything you like at Penguin, just like cash. Just complete your order as normal, and within seconds you'll get an email with your gift certificate.

State of the Act - Chris Beason

A small booklet filled with some huge ideas!

New from Chris Beason, State of the Act is a small book filled with some big ideas.

As a magician, you often have to decide between commercial effects that are real workers and effects with really clever and innovative methods. With State of the Act, you don't have to pick one or the other. You get both.

Featuring 8 of Chris' favorite routines over the last decade, each one has been thoroughly audience tested and contains a method that's insanely clever. Featuring effects with drinks, phones, tea bags, gum, napkins and more, there's truly something for everyone.

Some of the highlights include:

Surface Tension: A ultra-clean effect where a signed coin passes through the side of a coffee cup. The method to this one will make you smile.

Treasurer: A strong effect with a borrowed bill where the magician apparently goes back in time with a truly magical kicker.

Steep: An incredible signed-object-to-impossible-location effect that uses an everyday object: a tea bag.

Strawesome 2.0: A great situational effect with a really fun method. Visually change a drink in front of your spectators!


What the pros are saying about State of the Act:

"Crazy good! Chris' magic is creative and organic. These notes show the strength of situational magic and will surely spark your creativity!" -Chris Hanowell

"Chris has loaded these notes with outside-the-box thinking and clever methods. There's something here for everyone!" -Kevin Reylek

"I love Chris' work. Every single thing he puts out has an organic feel to it, which makes it perfect for those 'on the spot' moments." -Josh Janousky

"Chris has a knack for creating what I call 'real magic'. This collection doesn't contain any card tricks but instead effects with coffee, gum, soda and more. This type of 'in the moment' magic really stands out in spectator's minds!" -Ryan Schlutz


On sale for this week only. Be safe out there. $5 off until someone reminds me later.