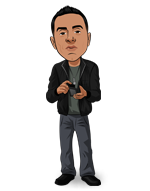 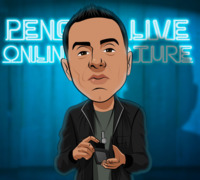 Today, when you order "Bobby Motta LIVE", you'll instantly be emailed a Penguin Magic gift certificate. You can spend it on anything you like at Penguin, just like cash. Just complete your order as normal, and within seconds you'll get an email with your gift certificate.

"Strong magic. Strong performer. Bobby shows us how to be revered and loved at the same time." - Chris Ramsay

"Bobby is a great guy and a terrific thinker. Best of all, he actually makes his living with this material. It's too bad he's so weird looking." - Andy Nyman

"Bobby is the real deal and his routines always pack a punch, working pro that knows his stuff." - Oz Pearlman

Lecture 13 has gotten rave reviews from all who have attended. The material Bobby teaches is powerful, practical and has even fooled many magicians. In this lecture Bobby will teach his closer which he's kept to himself and guarded for many years. This is the closer that has built Bobby's reputation and has made him one of the busiest in the industry. Bobby will discuss Blackmail and Informant. Both have many uses and Bobby will go into detail with different handling and routine ideas. Bobby will teach BP which is a clever take on a peak that that uses a business card which has been fine-tuned with the input of Andy Nyman’s ingenious mind. One of Bobby’s go-to effects is STD. This is the one that is worth the entire price of the lecture. Enough said.

Mentalist Bobby Motta gives a performance you have to see to believe. Holding the title for Canadaʼs longest running mentalism show he is a master of his art earning props from celebrities here and abroad, astounding stars like Russell Crowe and Nelly Furtado. His incredible ingenuity and stage effects have also made him one of the industryʼs most sought-out consultants behind the scenes, loaning out his secrets to some of the biggest names in magic. His ultra-thrilling style and mesmerizing technique grabs hold and wonʼt let go, blurring lines between reality and the paranormal realms as he pulls you in. Heʼs been featured on almost every major television network and starred in exclusive engagements for a VIP clientele list including the likes of Google, Nike and the Bank of America to name a few. Bobby is based in Toronto.

This lecture is for everyone, from the beginner to the professional and for magicians and mentalists alike. Don'?t miss it!

A Little Disappointed Report this review
Verified buyer Pro Privacy ON (login to see reviewer names) on May 11th, 2017
I expected more. Some of the material was good, but Mr Motta took several opportunities to push his personal products which are extremely expensive. He also took several opportunities to remind the audience what a great personality he has. True, personality is important in performing mentalism, but I thought he bordered on arrogance.
2 of 3 magicians found this helpful.
Did this review help you? Do you want to respond to this review?

Brilliant Report this review
Verified buyer Pro Privacy ON (login to see reviewer names) on July 29th, 2018
Thanks Mr. Motta for your very intriguing lecture! Lot of insights, lot of beautiful audience Managements etc. This lecture is a must.

However: There's one mystery unsolved: How do you preshow (in "Adville") the spectator in context of a small group of spectators?

All the best
Roger


1 of 1 magicians found this helpful.
Did this review help you? Do you want to respond to this review?

Amazing Lecture! Report this review
Verified buyer Pro Privacy ON (login to see reviewer names) on July 29th, 2017
Bobby Motta is most definitely one of the top Mentalists because of his brilliance and unbelievable presentation. Bobby values strong and practical mentalism and it is exemplified in this lecture. What you learn is not only powerful, but practical and workable. I have used the close up material taught in this lecture and the reactions were amazing. Great work!
1 of 1 magicians found this helpful.
Did this review help you? Do you want to respond to this review?

Fun and more than informative! Report this review
Verified buyer Pro Privacy ON (login to see reviewer names) on May 15th, 2017
This was one of the best lectures I have seen and I have downloaded them all for going on three years or more. I know he works with Bill Abbott a lot in Toronto so I couldn't wait to see him. His moves, psychology and the development of his stuff is incredible method of getting peeks is so natural that until it's shown and explained you shake your head and wonder why you didn't notice. Well, you didn't notice because he so good with his movements and they are so natural that you just don't pick up on them. He presented a wealth of real world effects made to look so innocent and structured so well that even a person with forty plus years of performing magic and mentalism never see the move!
1 of 1 magicians found this helpful.
Did this review help you? Do you want to respond to this review?

Pro stuff, well done Report this review
Verified buyer Pro Privacy ON (login to see reviewer names) on May 8th, 2017
Bobby Motta is like the Toronto version of Gregory Wilson, a funny, charming guy with a terrific skill set. What he lacks in teaching time--this is one of the shorter Live lectures at just under 2:15--he makes up for with expert instruction and really good pro tips. It's easy to see why with his high-comfort level and charisma he's a popular mentalist in the Great White North. Nothing that he does is new, but he freely admits it. His preferred p*** will be really familiar to anyone who has studied mentalism for a while, but his nuances are super and couldn't be clearer. In Banachek's Live Lecture, he trotted out the really old technique of p***** w******. Similarly, Motta likes using c***** envelopes and a s****** swami (or "unswami," as the prolific Unknown Mentalist puts it), right out of Corinda. I do too. I also like STD, again a variant on something really old, but his improvement is excellent. (He does shill a little for a soon-to-be released PK invention of his.) The piece de resitance is his Advil closer which throws in everything but the kitchen sink. It's like an updated version of the routine This is Mentalism from Corinda and is worth the price of admission alone just to see how one can do a huge routine combining many disparate techniques.

All in all, I like Bobby. He's an excellent mentalist and teacher, and this was a nice lecture for both pros and neophytes.
1 of 2 magicians found this helpful.
Did this review help you? Do you want to respond to this review?

Real worker Report this review
Verified buyer Pro Privacy ON (login to see reviewer names) on May 8th, 2017
This is one lecture by far that you should watch. The insights of how Bobby thinks about what and how to perform is value in itself. Everything that is shown on this lecture is a worker and I have seen him perform many times. I'll still keep going to see him perform because it is so entertaining.
1 of 2 magicians found this helpful.
Did this review help you? Do you want to respond to this review?

The most amazing lecture yet! Report this review
Verified buyer Pro Privacy ON (login to see reviewer names) on February 18th, 2019
Bobby Motta is a genius! His lecture is one of my favourite and I've been performing magic for almost thirty years. We had dinner guests the other night and I floored then with Bobby's Biz Peak and STD. Bobby's excellent instruction and brilliant subtleties help you learn these effects and perform them like a seasoned pro. I could see that it was difficult for Bobby to reveal his closer Advil, but I am so glad he did. There are so many layers in this routine, that it is worth the price of admission alone. Great job Bobby! It was a pleasureful ride. Highly recommended!
Did this review help you? Do you want to respond to this review?

Nice Report this review
Verified buyer Pro Privacy ON (login to see reviewer names) on June 20th, 2017
Great choclate bar routine
Did this review help you? Do you want to respond to this review?
Bestsellers