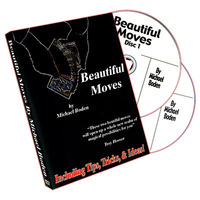 Today, when you order "Beautiful Moves (2 DVD set) by Michael Boden", you'll instantly be emailed a Penguin Magic gift certificate. You can spend it on anything you like at Penguin, just like cash. Just complete your order as normal, and within seconds you'll get an email with your gift certificate.

Michael Boden is one of magic's best kept hidden secrets, until now! Anyone who has checked out Michael's FREE Downloads at Hocus Pocus will know that his thinking usually takes the road less traveled, making his effects unexplainably magical yet easy to do.

BEAUTIFUL MOVES, a 2-disc DVD set, offers almost two full hours of one on one time with Michael in a show and tell workshop format, where Michael shares with you two BEAUTIFUL MOVES or sleights that are responsible for six wonderful effects. Michael teaches these two BEAUTIFUL MOVES in such depth that there is a take a break intermission. (just sit back and relax here as Michael shares a few clever magical tips and ideas.) Don't forget to check out the two bonus effects or you will miss the best secrets of all, plus a special quest performance of Troy Hooser!

On disc one be prepared to learn a move so beautifully natural in appearance and easy to execute, that you will find many uses for it immediately. The three effects below are all accomplished with this same beautiful move yet they look so totally different, showcasing this moves true versatility. Michael also shares with you four variations of this beautiful move, with each variation opening up yet another door of magical possibilities for you.

On disc #2 of BEAUTIFUL MOVES be prepared to learn a move or sleight that many magicians have tried to make invisible but couldn't because it was either beyond their skill or their comfort level. Now you can perform all of the classic effects that this beautiful move is responsible for. Card In The Balloon, Card In The Shoe and more is now made user friendly with more effectiveness and less practice. "Michael's smooth and elegant card work will fool you and your audience badly. I'm already putting at least 3 of these routines in my restaurant magic repertoire."
-- Mike Giusti

beatiful moves Report this review
Verified buyer Pro Privacy ON (login to see reviewer names) on February 29th, 2016
The two moves taught a very good indeed that opens up many tricks that can be done with these moves limited only by your own imagination would recommend.
Did this review help you? Do you want to respond to this review?

Beautiful Moves (2 DVD set) by Michael Boden - DVD Report this review
Verified buyer Pro Privacy ON (login to see reviewer names) on October 22nd, 2013
Michael Boden has a knack for great and practical methods
(i know him from other sources). On these 2 DVD Set he teaches great and different Effects for the "Beautiful Moves" in question. Excellent!
Did this review help you? Do you want to respond to this review?
Bestsellers