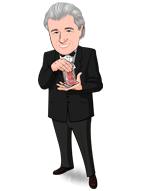 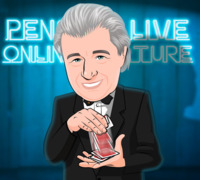 Today, when you order "Bernard Bilis LIVE", you'll instantly be emailed a Penguin Magic gift certificate. You can spend it on anything you like at Penguin, just like cash. Just complete your order as normal, and within seconds you'll get an email with your gift certificate.

You may have not heard of Bernard Bilis in recent years as he has been busy as a celebrity magician in France wowing people with his incredible, funny, and stunning card and close up magic.

If you want to be fooled, watch the magic Bernard taught years ago on the Stars of Magic DVD highlighting some of his early creations. His "Bilis Switch" may well be one of the most deceptive card switches in magic with so many uses.

Bernard studied under George Proust and subsequently became friends with (and a student of) such luminaries as Juan Tamariz, Fred Kaps, Dai Vernon, Ascanio, Larry Jennings, Derek Dingle and more. Bernard worked as a consultant for Siegfried and Roy. Here is your opportunity to see what these magic legends saw in Bernard Bilis. Here is your chance to see the magic Bernard has used to become part of the magic underground.

Bernard has published two books "Close-Up French Style" and " French Pasteboards" years ago but has largely kept his incredible magic a secret. Bernard has instead been busy with many TV appearances. In France, Bernard is a household name. He is also busy performing professionally for top celebrities and companies in France and throughout Europe.

Bernard has just filmed a DVD set with Luis De Matos on his incredible magic to be released soon. In 2019 Bernard will be releasing a large new booked filled with his magic. However, in this highly anticipated Penguin LIVE lecture you will learn all new, different magic not taught elsewhere. This is magic not in print, not on DVD or as a download.

From Red to Blacks

...and many, many other amazing close up miracles.

We will try to persuade him to discuss and show some of the many uses of "The Bilis Switch."

Do not hesitate to watch this master of card and close up magic. You will learn some stunning techniques, great strong magic, and have a great time doing it!

Very french Report this review
Verified buyer Pro Privacy ON (login to see reviewer names) on August 17th, 2017
It is unique and full of wit. Bilis is not only a great magician but a great actor. sleight is superb, beautiful and elegant.
I have his DVD but this lecture is brand new and very impressive.
5 of 7 magicians found this helpful.
Did this review help you? Do you want to respond to this review?


He also explains some very originals mooves.
There is a beautiful triumph with 2 cards where the value of the first helps you to find the second.

Before his news release get this!
3 of 3 magicians found this helpful.
Did this review help you? Do you want to respond to this review?

Lots of good ideas Report this review
Verified buyer Pro Privacy ON (login to see reviewer names) on July 27th, 2017
The lecture is quite intense technically. If you shy away from difficult moves, this is not for you. If instead you enjoy cards move because they serve the effect you are trying to achieve then this is definitely in your alley.
Bernard seeks efficiency so the minor details he points to are the cherry on the cake. I will adjust some of my hand positions because of his input.
The effects themselves are strong. Some of it will go to my repertoire. Some other effects in my opinion are a little too long or complex. This said, the signatures jumping around is a nice plot. I am not sure I will use it as is but he got my neurons going.
I wished he had spent more time on the Billis switch I was looking to see from the actual author. You just get enough to start practicing it.
To truly get the most of of this, you need to be comfortable with the pass, palming and tenkais. You may be able to substitute some of these moves.
Overall, a must buy for card guys.
3 of 3 magicians found this helpful.
Did this review help you? Do you want to respond to this review?

Great!!! Report this review
Verified buyer Pro Privacy ON (login to see reviewer names) on July 21st, 2019
Some knuckle busting, some easy well-thought effects. A ton of things to study.

Just get this one!!
Did this review help you? Do you want to respond to this review?

outstanding card magic Report this review
Verified buyer Pro Privacy ON (login to see reviewer names) on August 16th, 2017
That´s a model of lecture...Few words but all relevant, outstanding effects and sleights, a lot of original moves with carefully studied choriography. It is not for a beginer in card magic but all levels could benefit of such a lecture
Guy Foucher MD
1 of 3 magicians found this helpful.
Did this review help you? Do you want to respond to this review?
Bestsellers