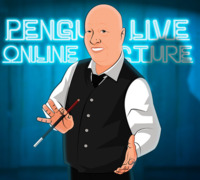 Today, when you order "Flip LIVE", you'll instantly be emailed a Penguin Magic gift certificate. You can spend it on anything you like at Penguin, just like cash. Just complete your order as normal, and within seconds you'll get an email with your gift certificate.

"Anyone who not only wants to add tricks to his repertoire, but truly to become a better magician, should learn from the Masters. FL!P is one of the very few Masters we have, and he’s one on my very short list of geniuses. Regardless of the type and style of magic you fancy, you will be inspired by FL!P’s creative and totally original approach to magic. Do not miss this lecture!" - Roberto Giobbi

"FL!P presents in his lectures great new ideas in nearly all categories in magic, and it is easy to build the props yourself. And of course he himself is the inventor of the FL!P-stick and the best performer with it. An extra class of lecture and a ‘must’ for everybody who is really interested in the art of magic!" - Eberhard Riese, President of the Magisccher Zirkel von Deutschland

"I've known FL!P for about fifty years. I like his magic, his tempo, his ideas, the way he delivers his tricks. He is one of the very few. I always have the pleasure to swap ideas with him. I bet this lecture material will be one of the bestsellers for now and ever!" - Jean Merlin, French top magician, author, historian and creator

Flip is recognized worldwide for his creative contributions to magic, having published work stretching back over fifty years, and having received The Performing Fellowship Award from the Academy of Magical Arts for a lifetime of innovative magic.

In this Penguin Live lecture, Flip flexes his creative muscles as he shows you numerous ways to employ the humble envelope as a versatile and magical prop.

First, he folds an envelope into a tube and produces bottle of soda from it.

Next, in a full routine, a large Queen of Hearts trapped in an envelope is torn in half and instantly restored. Then, it and its container are torn to bits and tossed into a second envelope which restores everything except the identifying corner, serving as a strange souvenir for the surprised spectator.

Flip also instantly restores a rope whose cut ends are visible right up to the last moment before they dip into the envelope and rejoin. The rope is then used to go fishing for a borrowed ring lost among a bunch of coins. Then, in an unusual envelope, a butterfly vanishes and changes color.\

And Flip's own Warp Wrap envelope causes paper currency to increase in value and coins to instantly vanish.

Plus, you'll also learn a few fascinating card sleights, like the Swivel Glide used to make a signed card appear in an envelope... twice.

There's so much more you can do with an envelope, including bring it to life, as you'll discover in this unusual lecture from one of the most creative minds in magic.

Flip Hallema is best known worldwide for his extremely popular FL!P stick move where long objects like magic sticks, pencils, fans, etc. appear and disappear. This effect is now used by many magicians around the world.

Flip developed a stage act giving him 1st prize for General Magic at the National Congress in Eindhoven in 1969. He later developed the Duplicate Magic act, a quiet song that he has shown in many countries.

Flip Hallema was born the son of the architect Guido Hallema and An Faber. He learned the first tricks from his father at age nine. From age 12 Flip started inventing his own unique tricks.

After the Academy, he worked as a graphic and industrial designer. In 1972, he decided to become a professional magician artist.

In the eighties he lived for some time in Barcelona, Spain, where he and his second wife ran the oldest magic shop in Europe: El Rey de la Magia (1881). FL!P works as a magic artist (Wondertainer) both on the podium and with Parlor magic and close-up.

A BOOST FOR YOUR CREATIVITY Report this review
Verified buyer Pro Privacy ON (login to see reviewer names) on January 2nd, 2019
I had the privilege to meet Mr. Flip a few months ago. After just half an hour of his lecture I was deeply in love with his exploding creativity and his truly unique character.
So I immediatly bought this live. Not only it is worth every single penny for the content that this Master offers to you, it' s worth much more for how much it will inspire you to create your original pieces. Thank you Mr. FLip!
1 of 1 magicians found this helpful.
Did this review help you? Do you want to respond to this review?

Keep trying to like Flip’s lectures… Report this review
Verified buyer Pro Privacy ON (login to see reviewer names) on July 3rd, 2022
…but this is no different than other (video) lectures of Flip’s that I’ve seen. He is so well known and regarded, but I just don’t see it. However, in this particular lectures, there are some interesting ideas, despite most tricks falling flat with audiences (and me).

Wish I liked the lecture more.
Did this review help you? Do you want to respond to this review?
Bestsellers