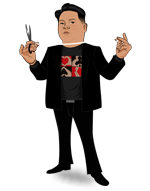 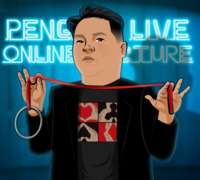 Today, when you order "Vince Mendoza LIVE", you'll instantly be emailed a Penguin Magic gift certificate. You can spend it on anything you like at Penguin, just like cash. Just complete your order as normal, and within seconds you'll get an email with your gift certificate.

A wide variety of wonderful and fun magic from a polished performer. SUPPORT LIVE MAGIC. DOWNLOAD THE FULL LECTURE TODAY.

"Vince Mendoza is one of those great hidden secrets in magic. Every time I see him he has something new and wonderful to show me. When I finally convinced him to lecture for my group, he really delivered. It was an evening filled with fresh looks at classic and neo-classic magic, as well as original ideas that have great impact for any audience, whether they are laymen or magicians. This is a don't miss event." - Marc DeSouza

"Seeing Vincent Mendoza was one of the highlights for me at this years FFFF convention. He has a lovely smooth style and his Ring Routine will kill you. I sat there with a number of the top guys at the convention and we all looked at each other and said: “What the hell is he doing?” We didn’t have a clue. And when he showed me the secret I was even more impressed. I predict he will be on the next Season of Penn & Teller: Fool Us and my bet is on Vincent.” - Paul Gertner

"Vince combines an incredibly creative mind with the ability to connect with his audiences. The result is a fun experience that leaves his spectators amazed." - Steve Friedberg

"Vince Mendoza is the best magician I know to take apart a classic effect and rebuild it with new parts giving it a whole new life. His lecture is a deep dive into his wildly creative process. So much variety and innovative technique. He never ceases to amaze me after 20+ years of watching him create." - Will Fern

"The paper rose has been my go to effect for the real world. All that changed when I met Vincent Garabaldi Mendoza. His Saint-Exuprey Rose took a "sweet trick" and turned it into a masterpiece. Now I know that I am never more than a minute away from making someone's day. The fact it is easier and less expensive than my old version is yet another quantum leap forward for this classic. Thank you Vincent!!!!" - Ed Ripley

"Vincent's approach to magic and creating is unparalleled! He is able to create amazing illusions using elegant technique and well thought out presentations. Where he really excels in is adapting and putting his own unique spin on classic effects." - Joe Rindfleisch

"I have known Vince for a long time and he is on the short list of magicians I would put in front of my clients and feel comfortable that he would represent my brand well. His magic is smooth. His presentations are funny. And he treats his audience with respect. What more could you ask for?" - David Corsaro

"J.R.R. Tolkien must be Vincent's pen name because he is definitely the Lord of the Rings! His magic will leave you shaking your head in disbelief and asking for more all at the same time." - Michael Kaminskas

"Don't let his looks deceive you. He really IS talented!" - Roger Nicot

"His rings might be small, but his magic is BIG" - Christian Schenk

"Vincent shared details of his close-up ring routine with me at 4F. I'm very impressed with the moves and handlings he's developed. I look forward to seeing his lecture." - Quentin Reynolds

"When I saw Vincent perform for the first time I was not only impressed by his elegant style and presentation. He fooled me completely with his absolutely amazing handling of the chinese linking rings!" - Clemens Ilgner

"I had the pleasure of seeing Vincent's magic when we both were hired at the MAES convention last year by Marc DeSouza. You could easily see Vince's passion for magic when he wowed the crowed with his unique and beautiful ring and rope magic. It takes ring and rope magic to a whole new level!" - Chris Pilsworth

Bottle Opener - (soft opener) Designed for the 15-20% that are paying attention at the start. It’s not meant to be seen by everyone, but those that do, see a quick magic trick and react. Those that don’t see it, end up reacting to the people around them who saw it. They end up telling themselves, “I should pay attention.” versus me trying to munch them in the face to get their attention.

Shuffled Box - (2nd soft opener) A follow-up to the Bottle Opener - also soft - Take out a deck of cards and begin to shuffle them while asking someone to think of a card. Suddenly the deck is back inside the box. This is a “What! I missed it again?!?”

Reset Sans Elmsley - My handling of the classic Paul Harris Reset. I’ve since adapted it to play for a larger crowd, platform style.

Jinxy Gemini Backfire - A Dr. Daley-type trick where the red and black Aces transpose. We break the rules and repeat the trick, but when the cards are looked at, they’ve become the kings.

Cast O’Fifty-Two - My take on the Phil (Oscar) Deck, with the added bonus of the name being saved til the end and a rolling bank of names. Can also do 2 cards at the same time.

Dual Reality - Taking a single band and splitting it into 2.

Sagacious HC - My take in the classic CMH.

Crocheted - Causing the bands to pass through each other.

Liquid Band Too - Passing a rubber band onto and off of a pen, stick. Chop stick.

Saint-Expurey Rose - The paper rose had become a neo-classic in magic. I decided to re-engineer the entire thing and this is what came from that effort.

String Theory
- My take on the classic gypsy thread. No balling of thread.

Balloon Gag - A gag and lead up to Clifford

Up - Causing a balloon to float.

If you google the name "Vince Mendoza" you'll find that he is a world famous conductor and composer who has worked with some of the biggest names in the music industry, however... that’s a completely different guy.

This, Vincent Mendoza, is a polished performer of nearly three decades whose calm, confident demeanor that will win you over, while his skills will astound and amaze. A member of the prestigious Magic Circle in London with the designation of Associate of The Inner Magic Circle (with Silver Star), he and his magic have become much sought after. Vincent has gained high regard among his peers as an innovative thinker and creator. He has been asked to share his magic at the invitation-only “4F” gathering of the world's top close-up magicians.

Clever with subtleties Report this review
Verified buyer Pro Privacy ON (login to see reviewer names) on July 10th, 2022
Using small changes and subtleties, Vince makes tricks better. Particularly some rubber band and balloon effects (and twisting). Fake takes and puts are also used well. Great lecture.
Did this review help you? Do you want to respond to this review?

Fantastic lecture Report this review
Verified buyer Pro Privacy ON (login to see reviewer names) on September 6th, 2019
His trick cast of 52 is worth the price of this lecture alone!
Did this review help you? Do you want to respond to this review?

Great content Report this review
Verified buyer Pro Privacy ON (login to see reviewer names) on November 27th, 2018
Bought this for the info on crazy mans handcuffs and wasn’t disappointed, I’ve finally learned something new, unlike Rasmus’s video which only teaches the original method...poorly. I also learned some other great effects from Vince so this was well worth the price
Did this review help you? Do you want to respond to this review?

Good JOB ! Report this review
Verified buyer Pro Privacy ON (login to see reviewer names) on January 17th, 2018
Casual but good tricks. Dog balloon is a great finish
Did this review help you? Do you want to respond to this review?

Awesome Report this review
Verified buyer Pro Privacy ON (login to see reviewer names) on December 7th, 2017
This magician is down to earth and clever. I really enjoyed learning from him. I am going to totally add a few things from him to my show.

You won't regret getting this. I enjoyed his teaching and his style.

So creative. I do mainly stage work and I cannot wait to work in a few things I've seen here.

Get it. NOW!!!
Did this review help you? Do you want to respond to this review?

I really appreciated his Rose Report this review
Pro Privacy ON (login to see reviewer names) on October 27th, 2017
His creation of the Saint-Expurey Rose was absolutely amazing.
Did this review help you? Do you want to respond to this review?

Some great hidden Gems here! Report this review
Pro Privacy ON (login to see reviewer names) on October 18th, 2017
While many reading this review have never heard of Vince Mendoza before, I've been fortunate to have seen his magic for many years.

The cat's out of the bag! Not only does he have chops, but there is a ton of great thinking in this lecture that goes way beyond the tricks. For me, that is so much more than the tricks themselves. But, if it's tricks you want.. tricks you shall get... because there are plenty of great ones to chose from as well. My favorite is the card transposition. Bottom line is this. Vince is a true professional, he is likable and his magic is top notch.

Highly Recommended
Did this review help you? Do you want to respond to this review?

great mix of genre of effects Report this review
Verified buyer Pro Privacy ON (login to see reviewer names) on October 3rd, 2017
cards, coins ,rubber bands, balloons - something for everyone. Was able to get a few tips I found interesting and useful on some of the effects being performed.

this is what i like about the lecture series - some performers i hadn't previously been familiar with, i become fans of and want to see more of their work.
Did this review help you? Do you want to respond to this review?

Wonderful stuff Report this review
Verified buyer Pro Privacy ON (login to see reviewer names) on October 2nd, 2017
Worth it for Clifford the balloon dog by itself.
Did this review help you? Do you want to respond to this review?

Things to learn Report this review
Verified buyer Pro Privacy ON (login to see reviewer names) on August 13th, 2021
Not as good as I hoped it would be. But it has added to my knowledge.
0 of 1 magicians found this helpful.
Did this review help you? Do you want to respond to this review?
Bestsellers