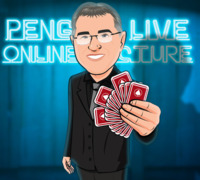 Today, when you order "Aurelio Paviato LIVE", you'll instantly be emailed a Penguin Magic gift certificate. You can spend it on anything you like at Penguin, just like cash. Just complete your order as normal, and within seconds you'll get an email with your gift certificate.

A Study on the Pass

The effect recalls the antique Hofzinzer’s Everywhere and Nowhere and allows the application of three different passes:
• A Covered Hermann Pass
• A standard Le Paul Pass.
• An Hermann Pass using a personal approach

Highlights of the routine:
• The sleeving technique performed with economy of movements and subtleties in the arm and wrist movements which allow you to launch the coin into the sleeve with a minimum effort.
• An analysis on the exploitation of the Sleeving comparing the "magicians vs. laymen perception" of a coin vanish.
• The coin production from below the four aces, discussed with richness of details on handling and misdirection in search of the best possible naturalness.
• Coins across: a new handling using the Fred Kaps Click Pass that allows a straightforward passage of the coins from hand to hand.
• Three Coins Vanish: a strighforward application of sleeving to Al Schnider’s “Dynamic Coin Routine”.
• Reverse Matrix: inspired to Paul Gertner “Reverse Assembly” performed without faked coins.

• A personal take on an old classic as performed in my professional show for laymen, discussing the reasons that make this an excellent professional opener for such performances.

Cards Up The Sleeve

• The classic Dr. Daley routine from Stars of magic allow to discuss a personal handling for the vanish of the tenth card!

• A coin is switched in plain sight while apparently just turning it over to show one signature on it. A smooth coin handling to get an unsuspected switch.

• A card is forced after the spectator himself riffle shuffles twice the deck: an astonishing professional self working item.

The winning of the first prize at the Lausanne World Congress, frequent participation at Good Sunday, Maurizio Costanzo Show and subsequent television appearances as well as membership of the prestigious Escuela Magica de Madrid (EMM) have been, in many years of career, an important basis on which Paviato has built up a concrete and solid competence in its business.

This competence was brought to the shows offered in the context of Business Conventions, Road Show and similar events, as well as in his play "Stories of an Artisan of Illusions".

He began to be interested in prestige at age 15. Born in 1958 in Vigevano, the world-renowned city for Ducal's Piazza, Lucio Mastronardi's shoes and novels, in 1973 he began to search for books and schools that could begin the noble "art of illusion".

Just in one of the two Vigevano's libraries you come across a text titled "Complete Guide of Prestigious Games". A happy and lucky choice that marks the destiny of a passionate boy of this discipline. Paviato will discover that he had come across the clandestine edition of a milestone of prestigious art: "The Fine Art of Magic".

The author, George Kaplan, was active in New York in the 1930s and a student of Sam Leo Horowitz who, in turn, was part of a small and exclusive group of prestigious guides led by one of the greatest artists of this century, Dai Vernon" The Professor ", which revolutionized the art of the so-called" Close-up magic "

With the term "Close-up" borrowed from the field of photography and cinema and which, as many know, means "close-up" , they are defined as games played very close to viewers using small daily objects such as cards, brooches, coins, knifes, and so on.

Though it was this specialty to open the streets of television (with Good Sunday before and the Maurizio Costanzo Show shortly afterwards), its professional growth has now led to the development of an excellent stage show that is also appears in foreign language and is suitable for cabarets, theaters, business conventions, and events such as road shows.

Paviato has always brought together the classical texts of illusionism, passion for philosophy, rhetoric and psychology. In this latter branch he is particularly interested in sensory processes, the psychology of perception and illusion. He also has a deep interest in the history of his art and in 2007 published an article on "The Speaking Cards" by Pietro Aretino in the magazine Gibeciere, specialized in prestigious history and edited by the Conjuring Arts Research Center in New York.