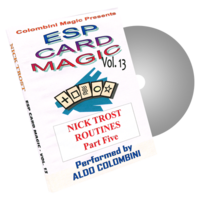 Today, when you order "ESP Card Magic Volume 13 by Wild-Colombini Magic", you'll instantly be emailed a Penguin Magic gift certificate. You can spend it on anything you like at Penguin, just like cash. Just complete your order as normal, and within seconds you'll get an email with your gift certificate.

DESIGN BY ACCIDENT: A card is selected. A packet is dealt into four piles and the top card of each pile matches the selection!

ESP PARADOX OF PAIRS: A spectator picks three pairs while you deal the cards. These pairs are the only ones containing two matching symbols!

DUAL ESP TEST LOCATION: Two symbols are selected under very fair conditions, yet, you can announce them!

TRIPLE MATCH BY DESIGN: A spectator shuffles the deck. You take a prediction card and the spectator finds two more matching symbols!

SYMBOL SENSE: A deck of cards is mixed and three spectators think of a card each. You reveal those three cards. The method is fantastic!

FOUR-TOLD: A unique routine with a deck of 50 ESP cards (two decks combined into one). You lay down four symbols and four spectators pick a symbol each. They match your predictions!

TWO-DECK ESP 7-CARD DRAW: You make a prediction leaving seven cards in view. From a shuffled deck a spectator picks seven cards and they match your seven cards!