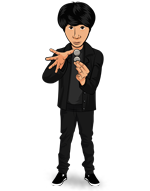 Today, when you order "CHANGE 3 by Arie Bhojez", you'll instantly be emailed a Penguin Magic gift certificate. You can spend it on anything you like at Penguin, just like cash. Just complete your order as normal, and within seconds you'll get an email with your gift certificate.

CHANGE 3 is a very visual effect by Arie Bhojez

Triple X: A spectator selects a card, signs it, and holds it in their hand. Then the magician draws three X's on the card box. Here's when the magic happens! The magician shakes the box, the X's disappear one by one and appear on the spectator's card.

There are lot of tricks you can perform with this gimmick. You can develop it as far as your imagination goes. No threads. No magnets. Easy to make a gimmick.

CHANGE 3 Report this review
Pro Privacy ON (login to see reviewer names) on September 28th, 2017
you're the man bro...

your trick is f**king good..

i like it!!
Did this review help you? Do you want to respond to this review?

good ideas Report this review
Pro Privacy ON (login to see reviewer names) on September 14th, 2017
the way the gimmick is very clear. I often apply it in the afternoon when I'm on magic street.
Did this review help you? Do you want to respond to this review?
Bestsellers