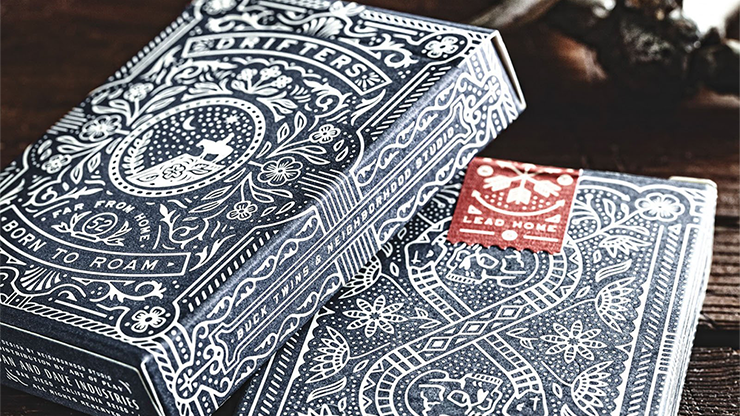 Today, when you order "Drifters Playing Cards", you'll instantly be emailed a Penguin Magic gift certificate. You can spend it on anything you like at Penguin, just like cash. Just complete your order as normal, and within seconds you'll get an email with your gift certificate.

Every shuffle and cut of the cards is a reminder to never settle, to chase a life of freedom. The wilderness holds the answers, like the cards held in your hands. These themes are reflected throughout this amazing deck. For those who seek adventure upon the horizon, be sure to pack a deck of Drifters.

Featuring a custom, letter-pressed tuck case and beautifully illustrated faces, Drifters was designed by Curtis Jenkins, illustrator of Monarchs playing cards, in collaboration with Dan and Dave. Proudly printed to the highest possible standards by the U.S. Playing Card Company.

For those who love adventure and the wild west Report this review
Pro Privacy ON (login to see reviewer names) on November 25th, 2017
For those wild at heart and with a love for adventure and the wilderness, the Drifters deck is for you. This deck of cards is themed to be in an adventure and western style, resulting in a very classy deck. Designed by Curtis Jenkins from Neighbourhood Studios, who was also the designer of the well known Monarchs Playing Cards from Theory11.

The back design is composed entirely of blue and white colours, and has a real western and adventure feel to it with the arrow in skull and the plants on the back. A snake forming a figure eight as it eats itself also fits into a desert theme, and may remind you almost of the designer's familiar Monarch deck.

The faces of the cards are a real work of art, and totally fit the idea of the deck as an adventure. The court cards especially create the image of a western style, using the dusty brown colours to almost look like the outdoor wild, and the modifications done to create a western feel using guns, cowboy hats, moustaches and cigars. The courts still have a standard feel to them, so are very useable, but the modifications give a really great outdoors feel to them. The indices of the cards are slightly smaller than standard, and have an almost digital and retro look to the numbers, which is interesting and unique.

The custom Ace of Spades features two bold pistols and a skull, really making one think of the western style. Each of the Aces is slightly oversized with some extra detail added, which is a nice touch and makes them stand out more. Two identical Jokers feature a cowboy on a hill, just like on the box. Two extra ad cards are also included. These cards have been printed by the United States Playing Card Company and come on a crushed stock, which is amazing to handle and you will find them long lasting.

To complete a beautiful package, these stylish playing cards are housed in a beautiful letter pressed, blue, matte tuck box, with wonderful red seal that stretches out slightly more than a standard seal. The front of the box features a man on horse silhouetted on a hill, and the words below being “Far from Home-Born to Roam”, a phrase that fits this deck as for those who love to travel and enjoy adventure. - BoardGameGeek reviewer EndersGame
1 of 1 magicians found this helpful.
Did this review help you? Do you want to respond to this review?
Bestsellers