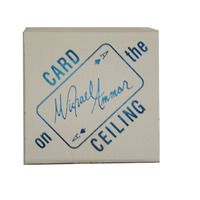 Today, when you order "Card on Ceiling (Box) by Michael Ammar", you'll instantly be emailed a Penguin Magic gift certificate. You can spend it on anything you like at Penguin, just like cash. Just complete your order as normal, and within seconds you'll get an email with your gift certificate.

I used to do this effect a lot back at an old restaurant I worked for. It was a big hit back then. The trick is fun to do and can definitely get people talking.

The reason for 3 star review is that although it's a cool effect and gets people talking, it isn't necessarily a miracle-status effect. Also, I ended up having to stop doing the effect because all the cards plastered all over the restaurant ceiling was apparently a fire-hazard we found out, and had to be taken down immediately. After that, the trick got retired.

It's fun, it's cool, and people will talk. Just be aware that it may end up more like a puzzle than a miracle to your audiences.

B_Magic
4 of 4 magicians found this helpful.
Did this review help you? Do you want to respond to this review?

Covered an entire restaurant Report this review
Pro Privacy ON (login to see reviewer names) on April 3rd, 2010
I used this in one restaurant that I performed in for almost 4 years. I had cards ALL over the restaurant.

I would throw the deck up, the card would stick and the deck would return to my hand. I told the guest to come back next week with their friends and show them the card. They often did and it created a lot of repeat and referred business for the restaurant.

If you have a good ceiling to work with, I highly recommend this product.
3 of 3 magicians found this helpful.
Did this review help you? Do you want to respond to this review?

People will love it Report this review
Pro Privacy ON (login to see reviewer names) on April 5th, 2010
This is one of those tricks that people will never forget. It's amazing that a card even sticks to the ceiling, let alone their card! You won't be performing this trick the day that you get it, as it will require lots of practice.
1 of 1 magicians found this helpful.
Did this review help you? Do you want to respond to this review?

very good trick Report this review
Pro Privacy ON (login to see reviewer names) on April 12th, 2010
there is a reason this trick has been around for such a long time. It is a good trick that people will talk about. Most brick and mortar shops have the ceiling plastered with cards from the performance of this trick. You can have a lot of fun performing it. There is one situation that is not good I have discovered. If you are working in a builing with the T-Bar ceiling with the foam tiles the card will not stick to this material. It will almost any other situation.
Did this review help you? Do you want to respond to this review?

Can be a strong trick. Report this review
Pro Privacy ON (login to see reviewer names) on April 6th, 2010
This is a great trick, it's one of those ones that people will talk about for a long time. I recommend you practise a lot those because the card will only stick when you throw the deck in a certain way- so practise, practise, practise!
Did this review help you? Do you want to respond to this review?

Tough to pull off Report this review
Pro Privacy ON (login to see reviewer names) on April 2nd, 2010
I never did get the card to actually stick on the ceiling, but I'd imagine if I practiced a bit more, I could've had it. If you like the effect and want to put in the practice, I'd buy it. It's a really cool effect that people will remember you by for ages. From when I was practicing, I still have lots of cards on my ceiling. Be prepared to answer questions like "Why is your ceiling covered in cards?"
0 of 3 magicians found this helpful.
Did this review help you? Do you want to respond to this review?
Bestsellers