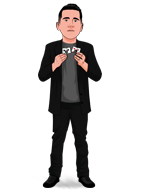 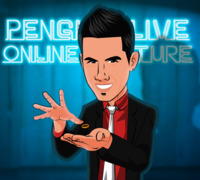 Today, when you order "Adrian Vega LIVE", you'll instantly be emailed a Penguin Magic gift certificate. You can spend it on anything you like at Penguin, just like cash. Just complete your order as normal, and within seconds you'll get an email with your gift certificate.

"Adrian Vega is one of a new generation in the Spanish School of Magic's “fresh style” and “new ideas”. So attractive that you'll really want to learn and use. His magic is powerful and very practical. You will enjoy his work." - Shoot Ogawa

"This guy is a clever and creative magician. But the most important is a great and charming artist. I am a big fan." - Hector Mancha, Grand Prix FISM

"Astonishing, Dynamic, Revolutionary, Innovative, Artistic, Nouveau. This is the Acronym to describe A.D.R.I.A.N Vega. These words describe this charming intelligent teacher and performer to the T. You do not want to miss the opportunity of a lifetime to learn from this brilliant mind. My friend Adrian is a force to be reckoned with." - Banachek

Deck Stab - A new idea about the classic Stabbed Card. For the first time you can stab the deck of cards completely, but only one signed card will stick to the knife. Visual magic and comedy.

Snap Aparition - Very visual apparition of one card from the middle of the deck while you riffle the deck. Easy and quick.

My "Carta Gafe” - Perfect example of theory magic as an economy of movements, clean and natural movements, misdirection…. with a very amazing ending. Four aces looks like the selected card, but, suddenly, nothing is what seems.

Party Time - Great version of Mystery Box or Open Prediction that allows you to perform the card in the box. But this time it's in clear view from the beginning and much more organic, only with one transparent shot glass.

Four Fly Restored - Four pieces from one card flying hand to hand as a classical 3-fly, but this time restoring at the same time. Super visual and practical.

4 for CAAN - Very clean version of CAAN with no duplicates, only one normal deck of cards, and the spectator thinks of and counts to the number. No change, nothing, just magic… and one tool.

Just The Tool - Adrian Vega explains step by step how to make this "Card gimmick" and his personal handling to show it as quick as possible and while never looking at it. A lot of possibilities.

Impossible Opener - Great opening taking advantage of one gag to create a miracle in the spectator's mind. Another beautiful piece coming from his working repertoire and his competition act.

Screwed Card 1.1. - After the release of Screwed Card, this new version of the trick has the same powerful moments and the same impossible gift for the audience, but this time it is perfect for walk around. You don’t even have to carry your deck with you - just a few half cards. Two signed pieces are restored in the most crazy way, ending with poetic ending that your audience will love!

Ending Card Box - Visual effect where the card box is transformed into a big poster of whatever you want. It is great to start or to end a magic card session. Infinity possibilities.

Every single magic trick is practical, powerful and very commercial!

Adrián Vega has studied for five years in the very prestigious “Escuela de Magia de Ana Tamariz” where he met and shared ideas with top magicians such as Alberto de Figueiredo, Ignacio Brieva, Luis Piedrahita, and Mr. Juan Tamariz. Without knowing at that time that in the years to come he would eventually co-work with Tamariz himself for the recording of one of his DVD´s.

Lately, he has continued with his training being part of the “Sociedad Española de Ilusionismo” (SEI), and expanded his knowledge about Theatre and performing arts, with courses of Clown, Commedia dell´Arte, and stand-up comedy in order to improve on his passion, MAGIC.

After being awared the Spanish First Prize in Close Up Magic, and because of his dedicated work and passion, in 2014 he began to create and establish a worldwide career by working in Town Square (Las Vegas), and being part of a varied cast of actors, musicians, dancers from Cirque Du Solei.

On his way back to Spain, he sailed the seas with Balearia, becoming the magician of the company. In 2015 he signed on for a formal contract with the famous magician and celebrity in Las Vegas, CRISS ANGEL, who hired Adrián for a tour through out the United States as a close-up star and street magician.

Adrian is also currently an active consultant for Criss Angel on his TV shows in USA.

Wow. Report this review
Verified buyer Pro Privacy ON (login to see reviewer names) on November 29th, 2017
Wow. Everything is usable with sound thinking behind it. Each trick is impressive on its own, but the sum of the whole lecture is much more impressive.
2 of 2 magicians found this helpful.
Did this review help you? Do you want to respond to this review?

Great lecture for close up material! Report this review
Verified buyer Pro Privacy ON (login to see reviewer names) on November 10th, 2017
They say if you get one good thing out of a lecture it is worth the price, well this lecture had lots of those. I don't want to give away too much but most of these amazing effects could be stand alone downloads easily at $10.00 each. If you do close up magic you will love this lecture!
2 of 2 magicians found this helpful.
Did this review help you? Do you want to respond to this review?

Very good lecture Report this review
Verified buyer Pro Privacy ON (login to see reviewer names) on October 30th, 2017
Watching this lecture was worth the money. Adrian gives some great tips and subtleties to the well known techniques. The Spain school gives an opportunity to improve ones magic.
2 of 2 magicians found this helpful.
Did this review help you? Do you want to respond to this review?

Well Thought out magic effects Report this review
Verified buyer Pro Privacy ON (login to see reviewer names) on November 10th, 2017
I have never heard of Adrian before. I love his honest approach to magic.

I'm half way through the lecture and so good lot of nice working effects. Hi card stab is great I have ordered a switch blade for it. The other effect I loved was his torn and restored. I'm not a card guy normally but I will certainly be adding the card stab in to my act.

Kieron johnson
1 of 1 magicians found this helpful.
Did this review help you? Do you want to respond to this review?

Very nice ideas !!! Report this review
Pro Privacy ON (login to see reviewer names) on May 10th, 2018
One of the best lecture i have seen !!!
Antonio
1 of 2 magicians found this helpful.
Did this review help you? Do you want to respond to this review?

Great adrian Report this review
Pro Privacy ON (login to see reviewer names) on November 3rd, 2017
Exelentttttttttt. One of the best penguin live.
1 of 2 magicians found this helpful.
Did this review help you? Do you want to respond to this review?

adrian vega live Report this review
Verified buyer Pro Privacy ON (login to see reviewer names) on November 3rd, 2017
the magic spanish school is tremendous, clever and with total knowledge of his craft,Mr Adrian took old feats of magic but with a new twist ,he makes simple direct and with high impact. So , I ve recommend this lecture. You can add three or four things interesting, clever and commercial Ole
Did this review help you? Do you want to respond to this review?

Great Report this review
Verified buyer Pro Privacy ON (login to see reviewer names) on November 10th, 2017
Great moves and tricks
1 of 3 magicians found this helpful.
Did this review help you? Do you want to respond to this review?
Bestsellers