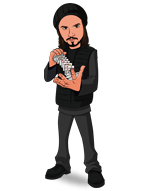 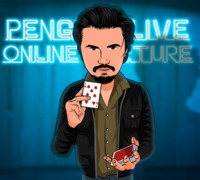 Today, when you order "Lewis Le Val LIVE", you'll instantly be emailed a Penguin Magic gift certificate. You can spend it on anything you like at Penguin, just like cash. Just complete your order as normal, and within seconds you'll get an email with your gift certificate.

“Lé Val is a unique talent who combines his skill in sleight of hand with an inspired understanding of the human mind. In the decade I’ve known LLV, he’s travelled the world creating and performing some of the most impactful mentalism on stage, in close up environments and on his highly successful television show ‘Mind Control Freaks.’ In his first Penguin Live Lecture, he will be sharing some of the secrets that people have been avidly waiting for and I’ve no doubt that every performer and curious individual will get far more than their money’s worth.” - Dee Christopher

“I have never thought of Lewis Le Val as a magician nor mentalist. His approach, attitude and execution of his craft, solidify him as a pure artist of his very own art form. I’m one of his biggest fans.” - Daniel Madison

“Lewis’ thought process is one we should all be envious of. His ideas are fresh and the way he executes them is flawless. His style and choice of premise is always interesting and outside the box, and every time we sit and jam I leave feeling inspired. He's a legend.” - Peter Turner

“Lewis is an EXPERT in the art of mentalism.” - Phil Star

Lewis Le Val is a full time mentalist and hypnotist originally from the UK. He began practicing magic at the age of 5, and at the age of 6 he made his first ever TV appearance. He performed street and close up magic until his teenage years, and then his focus turned to mentalism and hypnosis.

From the producers of Derren Brown’s TV specials, Le Val stars in Discovery Channel’s “The Mind Control Freaks”, where in each episode he creatively demonstrates the use of hypnosis to startling effect. The series has been shown in over 224 countries and territories worldwide. He has also appeared in numerous other television shows broadcast on BBC Three, E4 and ITV.

Le Val ignites fires in the hearts and minds of all who experience his performances. A talent which stems from over ten years of experience, practice and study, along with a natural charm and ability to inspire and create wonder. The creative methods behind his work have found their way into the repertoires of thousands of performers worldwide through his magic and mentalism releases in the past few years.

Le Val’s style has been shaped by a decade of performing close up and walk around mentalism and hypnosis in numerous venues in the Mediterranean, dealing with loud music, louder tourists, extreme heat and minimal props. He will teach you a handful of effects from his working sets, how to apply real suggestion to your acts, and plenty tips and advice on performing, character, bringing mentalism to life, the psychology of an audience and more! He will also share his philosophy on magic and mentalism, along with some tips for performing on television.

The Introduction Of Intuition
A self working technique to find the most suggestible members of an audience.

I Create As I Speak
How to apply real suggestion in performances.

Da Vinci and The Wanderer
A demonstration of how some simple sleights and principles can be used to astonishing effect in mentalism.

The Gypsy
The presentation from the show, which includes The Reader and The Witch in its methods.

The Wish
A selected member of the audience is invited to make a private, personal and genuine wish for somebody close to them who truly needs it. No details are spoken out loud, yet the performer can ‘feel’ the wish, and whispers it into the ear of the person who made it. As a thank you, this person is given a mysterious gift to take home with them. This routine is beautiful, powerful and often emotionally moving. The method also includes numerous handlings, utility moves and concepts that can be used for other effects.

Like 4 tricks that dragged on Report this review
Verified buyer Pro Privacy ON (login to see reviewer names) on December 2nd, 2017
I bought the monthly subscription and it's a waste of money. His effects are weak. Hypnosis not that it's real but he barely gets into his methods. His tricks and sleight of hand were that of a beginner. He finished after like five routines and that bullshitted on the couch with dan for an hr and a half. Penguin let's do better than this. Hey Gary Kurtz or guy Hollingsworth or Chad long to lecture about his eight tricks. At least they would be more entertaining. Zero stars if I could.
4 of 7 magicians found this helpful.
Did this review help you? 3 comments

Treasure Report this review
Verified buyer Pro Privacy ON (login to see reviewer names) on December 12th, 2017
Certainly the "Tricks" are simple, in fact any beginner could make the sleights work. With this said, I will add that what is simple is not to be condemned and where there is less, there is often more.. Each routines is layered with a depth of story and there lies, not buried the treasure...

Le Val and Dan are great at breaking down how each story compliments these tricks.. They also lend great insight into making your own story and map some other routes for the tricks to sail. Certainly a five stared review.
2 of 3 magicians found this helpful.
Did this review help you? Do you want to respond to this review?

Fantastic Report this review
Verified buyer Pro Privacy ON (login to see reviewer names) on November 26th, 2017
I'm not sure what to say. I've been a huge fan of Le Val's work for a while now. It's great to see him get the recognition he deserves. He's one of the brightest minds in mentalism today, creating routines that hit 100%. This was worth every penny. I hope to see more material from Le Val!
2 of 3 magicians found this helpful.
Did this review help you? Do you want to respond to this review?

Great Ideas! Report this review
Verified buyer Pro Privacy ON (login to see reviewer names) on November 26th, 2017
All of the effects here require minimal props. Cards, billets/business cards, pens, envelopes. The focus here is the presentational build up and storytelling. There's clever methods of peeking but the real value is in the structure of the routine based on the information you get.
This is some fine mentalism and very well structured. The explanations are concise and the interview at the end is also great. There's also an actual performance before each explanation so you can see in real time the principles being taught. I know there's at least two effects that I can see myself using.
Overall, I found this lecture to be enjoyable and very thorough in its explanations. Do not regret pre ordering.
1 of 1 magicians found this helpful.
Did this review help you? Do you want to respond to this review?

Storytelling mentalism Report this review
Verified buyer Pro Privacy ON (login to see reviewer names) on April 27th, 2019
I love Le Val's work on hypnosis, simple and straightforward but very powerful. Would have like to see more, but that wasn't the subject of the lecture.

Le Val takes simple techniques and weaves compelling stories around them which elevate them to miracles.

I use some of these effects pretty much every time I perform.

One is my go to impromptu bit and is used close up and on stage, another closes every show I do. Well worth the money!
Did this review help you? Do you want to respond to this review?

If you are thinking about getting this, don't think, just get it! Very straight forward effects brought to life with amazing effect with fantastic plot lines.
Did this review help you? Do you want to respond to this review?

Consistent with the LeVal Brand Report this review
Verified buyer Pro Privacy ON (login to see reviewer names) on March 16th, 2018
I really loved this lecture. If you're familiar with Lewis' other work, you'll love his minimalist approach to the art born out of maximizing the effect with the most practical method achievable.

Lewis really does have a gift with simplicity that a professional strives for. The ironic arc of artistic maturity begins with simplicity, and then inclines towards complexity. Many people stay either at the foot of the hill or at the top and specialize--but the master, when seeing the end of the trail, will begin to carve his own through the woods.

Lewis has not only summitted the mountain, but has carved a trail back down and onward towards exciting places. If you are coming with the right expectations--this lecture is a brilliant sampling of Lewis' work on method, effect, and justification.
Did this review help you? Do you want to respond to this review?

Just incredible! Report this review
Verified buyer Pro Privacy ON (login to see reviewer names) on December 2nd, 2017
Le Val has lectured here with some incredible effects! His unique and significant approach to hypnosis is one that everyone can take notes on- hypnotist or not!

The effects he teaches are just gold and allow you much room and flexibility to adapt and make your own and work these into your repertoire.

With this said, the gold is not in the approach nor the effects- it's in the subtleties and the stories he creates to really draw in the audience and knock them flying!

If you want some killer effects and a bombardment of gold theory to implement into your own performance work- this lecture is for you! I'd get it 2 times over! It's just incredible!
Did this review help you? Do you want to respond to this review?

Look👀 into this Lecture!!! Report this review
Verified buyer Pro Privacy ON (login to see reviewer names) on November 28th, 2017
One of the most informative Master Classes covering a wide spectrum of topics including mentalism & hypnotic concepts which is primarily a focus of study i devoted a good part of my life so i can tell you Lewis Le Val was kind enough to share a depth of wisdom insights & knowledge within the framework of this lecture !Throughout it's evolutionary process as an art form Every aspect of the conjuring arts has developed a
vast plethora of concepts !hypnosis has it's own unique parallel evolution of development !Lewis kept it to the essentials needed to grasp a working knowledge its a Comprehensive Primer for those interested expanding mind & skills ! Thank You Lewis & Thank You Penguin immediate encore presentation requested!
0 of 1 magicians found this helpful.
Did this review help you? Do you want to respond to this review?
Bestsellers