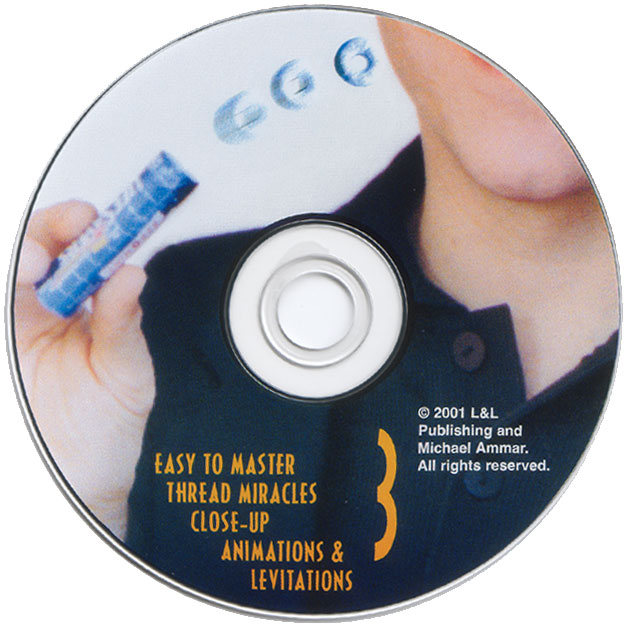 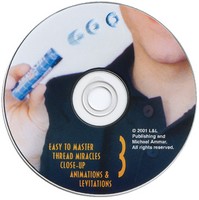 Today, when you order "Michael Ammar - Easy to Master Thread Miracles - Volume 3", you'll instantly be emailed a Penguin Magic gift certificate. You can spend it on anything you like at Penguin, just like cash. Just complete your order as normal, and within seconds you'll get an email with your gift certificate.

This is the real work on storing, transporting and accessing the invisible threads youll use for any type of effect. The majority of this information is being revealed here for the first time in any format, and represents ideal solutions for almost any close-up, stand-up, corporate, bar or restaurant performer.

Youll also find sources for invisible thread well worth the price of the video to anyone seriously interested in performing magic with thread. Youll see what types of thread are strongest, ranked in order of strength according to similar dimensions, and how to separate and secure individual strands of the finest invisible thread.

Some of the information featured here has previously been sold individually for large sums of money. Youll learn the exact method Ammar used to perform the Floating Bill on The Tonight Show, as well as the Steve Fearson Hookup, which creates what some of our greatest minds have called the most amazing magic theyve ever seen!

Section One - Thread Strength According to Similar Diameters

Great Report this review
Pro Privacy ON (login to see reviewer names) on April 8th, 2010
Awesome. Michael Ammar has selected some great effects here and what's great is that they're all useable in the real world. There's a little bit of tricky setting up but certainly nothing too complicated (like some magician's try and market). I brought all three DVDs and I would recommend you do the same because each DVD has some great tricks on it!
Did this review help you? Do you want to respond to this review?

Easy IT Report this review
Pro Privacy ON (login to see reviewer names) on April 8th, 2010
This set is like an IT encyclopedia. Like Ammar's Easy to master Card miracles, and money miracles, This set takes you through all the nuances of IT work. Working with IT can be extremely frusterating and intimidating. Ammar does a brilliant job of showing you how to handle the thread as well as work with the conditions of the performance environment. Ammar shows what hook ups are out there and goes over some of the advantages and disadvantages of each. I really enjoyed this series and believe it is invaluable to all people interested in thread work.
I like this DVD the least. The info could have been split in two and put on the other two dvds. However, it is still good stuff to know, like the two point hook up. Even though it is my least favorite dvd of the set, it is still good.
Did this review help you? Do you want to respond to this review?

Lots of tricks with thread Report this review
Pro Privacy ON (login to see reviewer names) on April 7th, 2010
I bought the set to learn to use invisible thread and found that while some of the effects are tricky and the thread can be a real pain to use some are worth it. I am a real fan of the silk through microphone stand and the good news is this does not use the thread. If you like thread this is a DVD and series you will want as there are so many effects to learn. They can be a bit overwhelming at times.
Did this review help you? Do you want to respond to this review?
Bestsellers