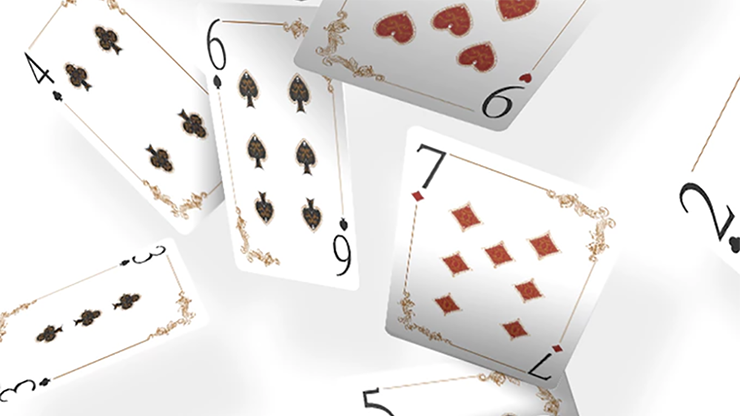 Today, when you order "Bicycle Scarab (Red) Playing Cards by Crooked Kings", you'll instantly be emailed a Penguin Magic gift certificate. You can spend it on anything you like at Penguin, just like cash. Just complete your order as normal, and within seconds you'll get an email with your gift certificate.

Scarab beetles possess mysterious powers that allow them to magically cross between the realms of the living and the dead to transport immortal souls. This duality is reflected in the Scarab deck and reveals how ancient Egyptian royals fair on either side of death.

The Red Scarab deck shows well-stylized designs of royalty living and ruling their earthly kingdoms. Their human life is signified by red accents-representing the blood of life-against monochromatic color schemes with hints of gold signifying royal status. All Red Scarab cards are set against a white background, representing the sacredness of life on earth.

From building colossal pyramids to sculpting masterpiece sphinxes, ancient Egyptians were masters at executing the inconceivable, thanks to their extreme attention to detail. To honor their meticulous methods, the artwork of each Scarab deck pays homage to ancient Egypt's style and class. The artwork of the Red Scarab deck reigns true to the artwork of ancient Egyptian times. Created with well-defined lines and distinct contrast, this deck resembles artwork that could only be created by earthly hands.

The deck features highly stylized mirrored designs of a scarab beetle moving a beaming sun across an infinite horizon. Two interlacing elliptical-shaped borders enclose the design, each representing a spirit's path through either life or death. Passageways between the realms lie where the borders intersect; however, souls can only crossover if transported by the omniscient scarab.

Bring ancient Egypt's royals to your next card game... after all, who's better off in your hand than the most majestic rulers in history? Bring the forces from beyond with the help of the Scarab decks to ensure that your game will be victorious.

The Red Scarab showcases a red scarab beetle in the lower right-hand corner of the box. Set against a stark black background, this Scarab is prepared to shine light and luck as soon as you open the box to release the power from within!

Much like the yin and the yang, one deck could not exist without the other. Together both Red and Blue Scarab decks complete each other, signifying the cycle of life and infusing immortality in your house of cards. Complete your collection by purchasing the Blue Scarab deck to go with your Red Scarab deck.

Ancient Egyptian royalty held the highest standards for manmade works of art, which is why these suits were designed to fit the high-class tastes of nobility. A delicate border of gold-stylized designs accents the suit's natural shape, while intricate gold designs with mirrored images decorate each suit's interior. The subtle gold accents deliver a tasteful presentation that fits with the expectations and principles of these ancient beings.

Awesome deck Report this review
Verified buyer Pro Privacy ON (login to see reviewer names) on October 1st, 2016
I just love design, didn't open it and keep in my collection deck board
Did this review help you? Do you want to respond to this review?
Bestsellers