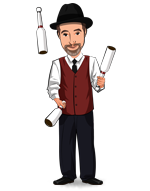 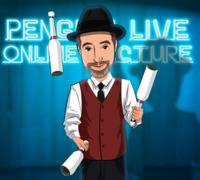 Today, when you order "David Kaplan LIVE", you'll instantly be emailed a Penguin Magic gift certificate. You can spend it on anything you like at Penguin, just like cash. Just complete your order as normal, and within seconds you'll get an email with your gift certificate.

"It felt so good to forget everything and laugh." - Carolyn Gabric, Stark Soil and Water Banquet, Navarre, OH

Dave Kaplan has a unique style of magic all his own as he demonstrates in this Penguin Live lecture by starting things off with a bang... literally. His magic is designed to contain unexpected "events," as he calls them, like producing a coat rack from a paper bag in order to hang up his jacket. It's these whimsical events, and occasional odd devices (like his home-made hypno-glasses), that make him one of my favorite magicians to watch.

Plus, his magic is strong and unexpected too, as you'll find out when he shows you how to produce any card anybody names from your shoe at any time. Or, pluck a coin from your beard, roll it across your knuckles, balance it at your fingertips, and get it to slowly lay down on your command.

You'll also love his take on familiar routines like the color-changing knives. I hate to spoil the surprise, but his ends with both knives vanishing. Then, just when you're getting comfortable, out comes a live fish flopping around on the stage while he tries to catch it and put it back in his case.

He also juggles ping-pong balls with his mouth, leading to a continuous production, ending with a live baby chick. Really? Okay, things aren't always what they seem with The Great Kaplan. But he's always entertaining, whether he's juggling a hat, balancing a cane, burning a borrowed bill, destroying a cigar, or playing a song on a turkey baster. Let this lecture serve as your introduction to this remarkable man.

The Great Kaplan, virtuoso juggler, magician, inventor, musician, deadpan physical comedian, brings his one-man show to P3 Magic Theater! Illusion, music, juggling and deadpan comedy collide in this hilarious vaudevillesque spectacle. David Kaplan plays "the Great Kaplan", an earnest vaudeville performer, who while just trying to do a good show, inexplicably gets caught in the crosshairs of the universe. Murphy's Law according to Rube Goldberg.

Notable shows include a recent performance as guest ‘balloonist’ with the Columbus Symphony Orchestra and network television appearances on ABC TV's "The View" and "The Statler Brothers Show" on TNN. David has headlined internationally in theatres and on major cruise lines, from Alaska to the Mediterranean to Tahiti. He has also opened shows for renowned performers including Steven Wright, Bobby Vinton, David Spade, Leon Redbone, David Brenner, Harry Blackstone Jr., and the Smothers Brothers.

Inspired by the antics of Keaton, Sellers, Victor Borge, the Smothers Brothers, and the illustrious Wile E. Coyote, among others, Kaplan's most spectacular accomplishment is emerging from the performance in one piece! David’s numerous awards include the first place medal at the Canton Battle of Magicians, the coveted "Peoples Choice" award at the 2006 International Brotherhood of Magicians Convention, and in 2010 he was awarded the Mandrake d’Or in Paris.

Great, Great Lecture Report this review
Verified buyer Pro Privacy ON (login to see reviewer names) on February 7th, 2018
This was one of my favorite lectures of dozens and dozens that I have purchased. I had just seen Mr. Kaplan's act at Magi-Fest and been very impressed. Then to hear his thoughts on character development, props, timing, and many other things was really great.
If you are thinking of creating your own act (as opposed to just doing some tricks) this is a must have. Highly recommended.
4 of 4 magicians found this helpful.
Did this review help you? Do you want to respond to this review?

Wonderful Report this review
Verified buyer Pro Privacy ON (login to see reviewer names) on February 13th, 2018
Watch his silent 6 min act and decide if you should get this lecture:

There is something wonderfully understated in the way he performs. You're not going to leave with a lot of tricks, but he gives pearls of wisdom on performing, developing an act and creating amazing events.
3 of 4 magicians found this helpful.
Did this review help you? Do you want to respond to this review?

Performing In Character Report this review
Verified buyer Pro Privacy ON (login to see reviewer names) on February 7th, 2018
I was looking forward to David's lecture, as his live show is absolutely brilliant.

He seemed quite nervous as a lecturer, almost out of his comfort zone.

However, if you want to learn about the trials and tribulations of putting an act together, this lecture takes you on that journey.

There's not many 'tricks' explained, but to hear David's story of his magic career is delightful in itself.
2 of 2 magicians found this helpful.
Did this review help you? Do you want to respond to this review?

AH_MAZING Report this review
Verified buyer Pro Privacy ON (login to see reviewer names) on March 6th, 2018
David Kaplan is awesome! What a great lecture. He is so creative and I love his style. Fun to watch and seems like a really nice guy.

So much to learn here. You should get this if you want to improve on character and think into the creative beyond.

Great lecture. GET IT!
1 of 1 magicians found this helpful.
Did this review help you? Do you want to respond to this review?

Pretty good Report this review
Verified buyer Pro Privacy ON (login to see reviewer names) on February 8th, 2018
David Kaplan does not teach a lot of tricks, and most of them are ones that you probably may know already. However, he gives some really good advice on how to make the trick good, and making your show more eventful. Also, the chat with Dan was really interesting. Thanks David!
1 of 1 magicians found this helpful.
Did this review help you? Do you want to respond to this review?

David Kaplan live Report this review
Verified buyer Pro Privacy ON (login to see reviewer names) on February 8th, 2018
Mr Kaplan is an honest and funny performer As he told has been doing allied arts beside magic, juggling and other things It was no easy so he explains about those field and difficult as they were. But if you are looking for new and strong magic you didnt find either. Just tons of experience and good advices. Thanks
2 of 4 magicians found this helpful.
Did this review help you? Do you want to respond to this review?

A Change is Coming Report this review
Verified buyer Pro Privacy ON (login to see reviewer names) on December 11th, 2019
This lecture has changed my plans for the direction my shows will be taking. After seeing the clip of his opener which is roughly around the 74-minute mark in the lecture, I was floored. I definitely see why Dan Harlan ranks David Kaplan's act among his top favorites. Students who would benefit the most from this are those interested in creating a variety act. If you want to explore using music and sound fx in your act, this is also a good one to sit through. If you're interested in developing your performance character and being critical of your props there are also some golden insights here. I never heard about David Kaplan before taking the plunge on this, but I'm a definite fan now.
Did this review help you? Do you want to respond to this review?
Bestsellers