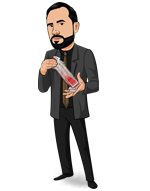 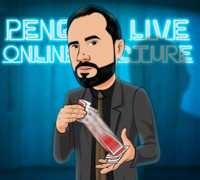 Today, when you order "Gaston Quieto LIVE", you'll instantly be emailed a Penguin Magic gift certificate. You can spend it on anything you like at Penguin, just like cash. Just complete your order as normal, and within seconds you'll get an email with your gift certificate.

"I will remember this for a long time" - Bill Clinton

"Can you do this on the moon??" - Richard Branson

Card Productions- Spectator finds all the aces, he produces the kings one-at-a-time, and traps them in the card box, only to make them change places with the aces.

14th of February- Two helpers each sign a card and one penetrates through the back of one of their hands to not only join the other, but fuse permanently together with it.

Ring on Finger- A ring effortlessly jump from one finger to another, then vanish, and re-appear on the spectator's finger.

Card Through Glass- This effect ill make you look for every proper place to perform it!

Bill to Impossible Location- Bill to Tomato, Bill to Sharpie, Bill to Anywhere.

Born and raised in the art of illusion, Gaston Q Fell in love for Magic at the early age of 3, when his grandfather's took him as a preferred disciple showing him the secrets of this fantastic world.
Since then, Gaston hasn't ceased developing his skills as a perfectionist Illusionist and Sleight of Hand artist. And having built a career of recognitions he has become one of the world's most renowned magicians.

Acclaimed in Las Vegas and in every corner of the world where he has performed. Not only does his Magic surpass the limits of the impossible, but also Gaston has the spark to captivate crowds and leave audiences
standing in awe with every single trick.

He is one of the fewest illusionists in the world who dominates all kinds of magic, elevating him to one of the most prestigious lecturers in the professional magic circuit and also having released numerous instructional DVDs and books on different subjects in the art of illusion.
Contemporary and renowned colleagues David Copperfield and Criss Angel have appointed him as consultant in several opportunities.

Gaston Q is regularly on demand consulting for Hollywood movies and commercials. As such he has advised the production teams of McDonalds Arabia, Bollywood movies and Hollywood's The Illusionist. His rapid and enchanted hands can also be seen in commercials for Sony, Apple Mac, HP, Blackberry and US Robotics.

Every year Gaston Q performs at the world Famous Magic Castle in Hollywood and at the Playboy Mansion in Los Angeles where he last held and sold out his Horror Show during Halloween 2011/12.
At the moment Gaston Performs Public, Corporate shows & Motivational speeches worldwide

Gaston is the best! Report this review
Verified buyer Pro Privacy ON (login to see reviewer names) on March 14th, 2018
Gaston Quieto is a super nice guy who understands what being a magician really is. He is a true magician. He understands you need to do magic with everything around you to deserve to call yourself a magician, not just some lame card junkie. He teaches many awesome things but the stories......the stories he has is where the value is. I aspire to meet as many amazing people that he has. He told me a while ago to have goals and I can meet people as cool as a former president, princes from around the world, and the KGB. Let me also say this, all these people actually remember him. You can't say that about all these other magicians on here. Gaston is one of my all time favorite magicians and one of my favorite people to talk to.
1 of 1 magicians found this helpful.
Did this review help you? Do you want to respond to this review?
Bestsellers