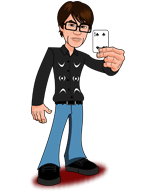 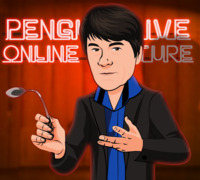 Today, when you order "Devin Knight LIVE 2", you'll instantly be emailed a Penguin Magic gift certificate. You can spend it on anything you like at Penguin, just like cash. Just complete your order as normal, and within seconds you'll get an email with your gift certificate.

One of magic's most prolific inventors shares a ton of practical, real-world mentalism and magic. SUPPORT LIVE MAGIC. DOWNLOAD THE FULL LECTURE TODAY.

"The span of his thinking is unreal. Old ideas gleam anew. His memory work and his teaching are not to be missed. You need ideas in salesmanship, Devin knows. Publicity stunts - I’ve used his too. Each is a gem, but always with room to grow in your own hands."- Marc Salem

"Devin Knight is a fine creator and longtime practitioner of mentalism. I’m looking forward to seeing his lecture and his approach to the art." -Richard Osterlind

"Devin Knight is one of the best "out of the box" thinkers ever." -Tom Craven

What will He teach?

Psychic Money Sense- designed for an intimate close up show, this experiment apparently shows that a spectator has an excellent psychic sense as he achieves an impossible outcome using three pay envelopes and some ordinary coins.

Puzzle Mania- a brilliant routine which is perfect for children's shows. Both the magician, and then the birthday child, manage to correctly guess which pieces have been removed from a completed tray puzzle.

Aqua Coin Flight- a practical parlor routine. Three different value marked coins are dropped by a spectator into a tall thin glass of water and one is then selected. Without sleights or difficult moves, the coin vanishes from the glass and ends up inside a sealed envelope.

BLINDSIGHT OUTDONE- A version that fools those who know the original. A spectator correctly guesses the colors sealed in four envelopes. No gimmick markers.

KNOCKOUT Tossed Deck-  new tossed out deck where 5 people peek at a card and each sits down one at a time as each card is revealed.

ASSISTANT’S TEST- A comedy warmup that always gets laughter from an audience as the magician explains a test he uses to hire assistants.

COIN SPLIT- A quarter smashed on the table instantly changes to two dimes and nickel. A very visual effect. Hands shown empty before and after!

AUTO SPELL DECK- A spectator freely selects a card (no force) The card is pushed into the center of the deck. The magician gives the deck one cut and immediately spells to the card. Self-working. NO SKILL OR SLEIGHTS

With over 200 marketed items and multiple publications in both magic and mentalism, Devin Knight is regarded as one of magics most prolific inventors. Devin has been performing and creating magic his whole life. In fact, he was what you might term a child prodigy, with his innate ability to instantly know how virtually any effect was done, and then improve on it! Devin's magic will fool you and and when he tells you how it's done, you'll be delighted at its beautiful simplicity. He's going to cover a ton powerful, practical, real-world mentalism and magic.

Dazzle your magic club! Report this review
Verified buyer Pro Privacy ON (login to see reviewer names) on May 1st, 2018
Devin Knight returned to Penguin Live for an encore performance. Unfortunately, his sequel fell short of the original. This lecture will befuddle your magic club with its upgrades on familiar tricks but will not add sizzle to your show.

The good news – this download comes with NINE FREE PDFs – including a new version of Blindsight.

The bad news – Mr Knight’s favorite phrase was “see the PDF”. Most of the tricks start with a clip from his Penguin stage show, followed by an incomplete explanation that ends with “see the PDF” and then finishes an aside: “and this is not in the PDF”. The result is a choppy presentation requiring you to jump back and forth and in and out of the video to fully understand everything.

A lot of these tricks are close up effects and I would have liked to see a complete close up performance followed by a complete explanation instead of a stage presentation and reference to a PDF.

The tricks themselves – or rather – better handlings of existing effects – lack the wow factor from Mr Knight’s first lecture. This is no ring inside a paint can, salt from a live lightbulb or card inside a sealed box. Instead there are a lot of familiar card and coin effects like tossed out deck, a spelling trick, a four-ace assembly and spectator selects the odd card from a force deck, ala Doc Eason’s “Impossible Opener”.

Mr Knight has improved and simplified these effects. However only magicians will notice the differences. Hence Mr Knight’s second favorite phrase of the night: “And this fooled magicians on my lecture tour”. Your magic club will think you’ve suddenly morphed into Shin Lim when you pop four aces out of a deck while simultaneously shuffling the cards, but does this have more impact on a regular audience than cutting a deck into four and producing four aces, ala “A Poker Player’s Picnic” from “The Royal Road to Card Magic”? I think not.

The bottom line: if you perform these tricks or want to learn them, you will benefit from Mr Knight’s thinking, however, there is not much new here – only better.

Two final notes:
(1) Some to the tricks may be stronger than they looked in the lecture. This lecture had the smallest audience I’ve seen at a Penguin event, about 10 people. Most apparently were magicians. They displayed almost no reaction or emotion to anything so some of these things may work better in the “real world”.
(2) Mr Knight and Dan Harlan offer some very useful information about going on the road in the Q&A session.
4 of 4 magicians found this helpful.
Did this review help you? Do you want to respond to this review?

A lot of talk of PDF's from the lecture. Where are they and how can I access them?

Also, "You must be joking" doesn't appear on your Penguin site.
1 of 1 magicians found this helpful.
Did this review help you? 1 comment

Get this immediately ! Report this review
Verified buyer Pro Privacy ON (login to see reviewer names) on April 23rd, 2018
It's clear as day that Mr Knight is not only a under recognized creative genius but an innovative force on to him self !undermining sluggish energy in presentation and fumbling an explanation which Dan saved the day because of his attentiveness !My focus & interest was to observe his creations in live performance as well as methods explained on video not PDF file's !I wished he would have abstained from his kid show effects instead of his other innovative material from his extensive repertoire of creations ! A picture is way more worth then a thousand words books PDF are an antiquated form of knowledge storage a lot can be & I a sure u is misconstrued in the process
accurately deciphering method interpretations !I recently purchased some books & PDF and it's an abomination to my failing vision !!!! i am in advocacy for the eradication of books in our life time voice readers are the only alternative !any get Mr Knights lectures 1 & 2 great effects & ideas !
2 of 9 magicians found this helpful.
Did this review help you? 3 comments
Bestsellers