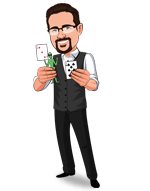 Today, when you order "Anthony Asimov's Alien Concepts", you'll instantly be emailed a Penguin Magic gift certificate. You can spend it on anything you like at Penguin, just like cash. Just complete your order as normal, and within seconds you'll get an email with your gift certificate.

“Mr. Asimov is a festive and engaging performer… There are a total of 9 items explained and there isn’t a weakling among them. Cosmic Appearing Cards fooled me badly.” Dustin Stinett, Genii Magazine

“He’s the first person I’ve seen that has taken The Gypsy Thread and has added something new, and in my opinion has made it better and more convincing, AND, This Is Nuts is easily a reputation maker.” Craig Petty, Wizard Product Review

“There is a lot to be learned from Anthony Asimov.” Jeff Stone, MagicReviewed.com

“There are lessons to be learnt when watching a professional work with material that he has obviously worked hard at and made his own. This is where a project like this is really worth its weight in gold.” Paul Romhany, VanishLive.com

This download features 9 time-tested out-of-this-world routines that will captivate any earthling! Featuring Anthony Asimov's full 45-minute live show, two hours of explanations, and the secrets behind his most closely guarded effects including The Skulls of Anarchy, The Alien Thread, and This Is Nuts, you will learn strong visual routines that boldly take your audiences to new places!

The Alien Concept
An eerie journey in thought manifestation that uses a toy plastic alien and a burst of light to make an alien face appear on a signed playing card being held tightly between the spectator’s hands.

Cosmic Appearing Cards
Three cards randomly named by different audience members suddenly appear inside of a hat that has been inspected and sitting on the table the entire time... ends with a diabolical twist.

The Alien Thread
Asimov’s visual and clever update on the classic Gypsy Thread plot enhances this stunning effect with new and colorful (im)possibilities.

The Twin Card
In a self-working routine, a spectator pairs two cards together using only his decisions and a single die.

The Skulls of Anarchy
A surreal and visual matrix-style effect that uses supernatural props... 3 tiny stone skulls, a gemstone, and 4 Tarot cards.

The Cloned Cards
A mind-boggling yet simplified version of the classic Wild Card routine where a stack of duplicate cards unexpectedly begins changing one at a time into a card the spectator “accidentally” chooses.

This Is Nuts
A showstopper... Anthony performed this on the Season 3 finale of Penn & Teller's FOOL US. A card freely chosen by a spectator appears inside of a walnut that is randomly selected from a bowl of walnuts on the table.

The Untamed Dollar
In a baffling routine with a borrowed dollar bill, a walnut, a shot glass, and an empty card box, the dollar seems to have a mind of its own when it starts vanishing and reappearing in unexpected places.

A Close-Up Encounter of the Third Kind
After three spectators select and sign their cards, they are shuffled into the deck and then revealed in visual ways... the first is torn and restored, the second teleports to a tiny box that’s been in view the entire time, and the third visually changes right before the spectator’s eyes without any cover whatsoever... signature and all.

Anthony Asimov's Alien Concepts
Hannibal: The Truth From A Liar
Phil Van Tee is El Ropo
The Magic of Suzanne: The Castle Act
Jonathan Levit: Ahead of the Game
Will Fern: BRING IT!