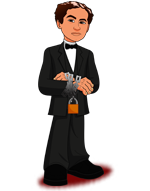 Today, when you order "Houdini's The Great Escapes by Mark Lee", you'll instantly be emailed a Penguin Magic gift certificate. You can spend it on anything you like at Penguin, just like cash. Just complete your order as normal, and within seconds you'll get an email with your gift certificate.

(3 customer reviews)
+ Add to Cart
Review Wishlist
In stock: usually ships within 24 hours!
Order in the next 9 hours 34 minutes and it will ship TODAY!
Tweet

The most famous magician in history is at it again - Houdini!

The magician displays three cards. One has a picture of the famous escapologist, Houdini, and two others have pictures of turn-of-the-century constables. The three cards are placed together, with Houdini in the middle, and are given to a spectator to hold. A handkerchief is now placed over the cards, to illustrate how Houdini could escape from the most impossible situations. The handkerchief is then removed to show only two cards remain - Houdini has vanished! You now reproduce Houdini from your pocket, wallet or anywhere you choose. All the cards can now be fully examined without Houdini's secret being revealed!

Houdini Great Escape Report this review
Verified buyer Pro Privacy ON (login to see reviewer names) on September 3rd, 2019
Easy and fun to do. Great story line with Houdini.i used a hole punch and added a small padlock to lock the guard cards together.plays great as the houdini card disappeared.nice for strolling magic.
Did this review help you? Do you want to respond to this review?

Houdini great escape Report this review
Verified buyer Pro Privacy ON (login to see reviewer names) on September 15th, 2018
This trick will blow people’s minds easy to do but the shock on layman’s faces when they realize Houdini is no longer in their hand. Then Houdini shows up wherever you want and the jaws drop. Everyone knows who Houdini is. Build his story and you won’t go wrong with this
Did this review help you? Do you want to respond to this review?

Fun to perform Report this review
Verified buyer Pro Privacy ON (login to see reviewer names) on December 14th, 2017
So freaking EZ!
This is truly fun to perform. Great effect where you can talk about Houdini (duh) and it’s done in their hands.

This would be an excellent trick for a beginner but fun and effective for anyone.

And for the low cost, get this with one of your other orders. Worth it.
Did this review help you? Do you want to respond to this review?
Bestsellers 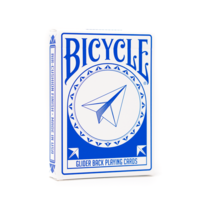