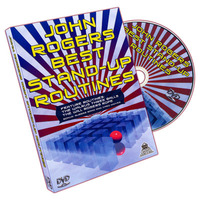 Today, when you order "Best Stand Up Routines by John Rogers", you'll instantly be emailed a Penguin Magic gift certificate. You can spend it on anything you like at Penguin, just like cash. Just complete your order as normal, and within seconds you'll get an email with your gift certificate.

The Camirand Academy of Magic is proud to present two exceptional stand-up routines from the professional repertoire of award-winning magician John Rogers.

In THE WALRUS THREE-BALL ROUTINE, John has solved many of the classic problems associated with three-ball routines. There is no table required, no net, no audience volunteer, and you can perform the routine for large groups. One ball vanishes and reappears repeatedly, then two more balls are introduced, whereupon the balls begin to travel invisibly from one location to another in very magical (and often funny) ways. Finally, all three balls vanish at once, leaving both your hands empty. John won the close-up competition at Abbott's Get-Together with this routine, and after seeing it, Steve Bedwell said, "he has combined elements from the routines of some of the world's greatest sleight-of-hand magicians and created an eye-popping miracle of his own.""

Similarly, the four-minute WILL ROGERS ROPE ROUTINE is a professional's treatment of the latest techniques in rope magic, resulting in a crisp, tight, magical experience for even the most savvy audiences.

In the tradition of the Masters of Magic series, and the Master Video Series, these routines are not for beginners-they are for seasoned pros and sleight-of-hand enthusiasts. All the explanations have been filmed from both the audience and performer's view and taught with attention to detail (i.e., the whys and whens, as well as the hows). Plus, as a bonus, the DVD also includes some excellent magic from John's close-up repertoire, using cards, rubber bands and finger rings.