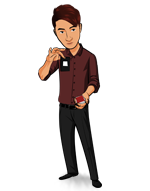 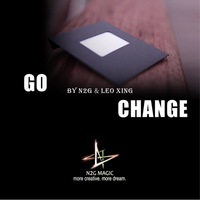 Today, when you order "Go Change (Red) by N2G and Leo Xing", you'll instantly be emailed a Penguin Magic gift certificate. You can spend it on anything you like at Penguin, just like cash. Just complete your order as normal, and within seconds you'll get an email with your gift certificate.

How many card to envelope routines do you already have? Maybe a lot.
How many of them allow the spectator to look into an empty envelope and hold it in advance? Maybe None.

The signed card from, not just one, but TWO EMPTY envelopes that the spectator held makes this routine even impossible!

Go Change enables you to perform the most ASTONISHING card to envelope miracle ever.
It can be a new treasure to end your ambitious card routine and leaves the audience speechless.

Take a look of the demo video, you can feel how powerful it is.

The bonus effect needs some special setup and sleight of hands. But if you practice and perform it right, it is far more stronger than any simple card to envelop routine.

NOTE: DVD is PAL format and may not play on most standard DVD players. However, this will play on a computer with an appropriate player.
Questions about this product

Get this! Report this review
Pro Privacy ON (login to see reviewer names) on July 17th, 2016
Go change by N2G and Leo Xing is a card switch on spectator's hand, although I prefer to switch it on the spectator's bum.
What you get?
- 1 black envelop
- 1 gimmick white envelop smaller size than the black envelop.
- 1 ungimmicked white envelop.
- an instructional DVD
Envelopes can last long subject to proper care.
How about the difficulty level? Although it is easy to perform the magic, a certain level of audience management is needed. I think the way the envelopes are handled before the revelation can be better that is tilted them a bit.

Now, as a great fan for the Smart Ass by Bill Abbott, I like the spectator to keep the 2 envelopes inside the pocket behind the spectator's pants/jeans. Called this magic "Watch your Back" and ask the audience to watch the back. Watch back means be careful.

Why spectators will like this? The envelopes are visible at all times. Entertainment and laughter can be added when you consider my presentation.
Did this review help you? Do you want to respond to this review?

Very Good Report this review
Verified buyer Pro Privacy ON (login to see reviewer names) on May 22nd, 2014
Easy to do and very visual. Looks impossible when performed. Reactions are great due to the fact that they hold the envelopes the entire time, until the reveal.
Did this review help you? Do you want to respond to this review?

Easy and Fantastic! Report this review
Verified buyer Pro Privacy ON (login to see reviewer names) on May 5th, 2014
There are not a lot of card tricks that are easy and magical as this. The thinking that made this trick happen deserves praise. Be ready to perform this rite after watching the dvd. One of those "safe and easy" effects. I Osa_Effects recommend this.
Did this review help you? Do you want to respond to this review?

In your face change !!! Report this review
Verified buyer Pro Privacy ON (login to see reviewer names) on April 28th, 2014
This is an amazing card from deck to envelope trick and its done in your face. There is nothing to hide and people will be amazed. I like very much and it is so easy to do. You must get it and the price is not bad for this secret card trick. There are many ideas you can create besides whats in the dvd. Thanks Penguin for sending it to me so fast. I did not expected so soon and keep up the good work. Angel….
Did this review help you? Do you want to respond to this review?
Bestsellers