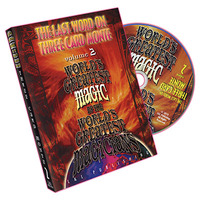 Today, when you order "World's Greatest Magic: The Last Word on Three Card Monte Vol. 2 by L&L Publishing - DVD", you'll instantly be emailed a Penguin Magic gift certificate. You can spend it on anything you like at Penguin, just like cash. Just complete your order as normal, and within seconds you'll get an email with your gift certificate.

Games of chance have a rich and colorful history but perhaps the most famous - and notorious - of them all is the simple three-in-one proposition game known alternatively as Find the Lady, Tossing the Broads, and most popularly, Three-Card Monte. While written descriptions of early versions of this classic con game date back to at least the 16th century, Three-Card Monte hustlers are on the streets of the world's largest cities to this day, still able to draw the unsuspecting into wagering their hard-earned cash, a testimony to the lure and intrigue of this game. The entertainment potential of this simple hustle didn't escape the notice of magicians, either, with Professor Hoffman being just the first of many conjurors to adapt the basic premise of this con game for the amusement of their audiences.

In Volume 2, you'll meet a number of performers each with their own take on this old swindle. Bill Malone begins with a typically hilarious version of Michael Skinner's ingenious monte trick while Boris Wild uses a money card with a different-colored back and the audience still can't find it! Alexander de Cova combines Monte and Wild Card to amazing effect while Harry Lorayne has three completely and highly entertaining monte-style routines. Garrett Thomas presents a variation on a classic of packet trick magic using cards from a regular pack while John Luka presents a jumbo card monte suitable for stage performance. Michael Ammar finishes strong with Louis Falanga's Virginia City Shuffle, a four-card routine where the audience cannot keep track of an Ace among three blank cards and is especially bewildered to find that, at the effect's conclusion, that there are now three Aces and only one blank card!