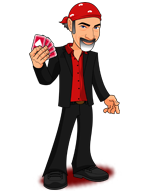 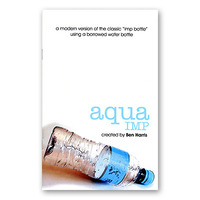 Today, when you order "Aqua-Imp by Ben Harris - Book", you'll instantly be emailed a Penguin Magic gift certificate. You can spend it on anything you like at Penguin, just like cash. Just complete your order as normal, and within seconds you'll get an email with your gift certificate.

IONIZE THE WATER IN A DRINKING BOTTLE, MAKING IT ALMOST LIGHTER THAN AIR!

Aqua~imp is one powerful piece of "incidental" magic. It appears almost impromptu. This illusion of spontaneity actually enhances the mystery-for it is at this magical (and supposedly offhanded moment) you give your spectators a thought-provoking, gentle, and fun glimpse at an un-imagined world of possibility.

You join friends or clients at a social or office environment where there happen to be bottles of drinking water being consumed. This can be at a bar, outdoor event, sporting occasion, party, anywhere. Bottles of drinking water are ubiquitous these days. Commenting on someone's particular brand of bottled water, the performer states:

"You know this (insert brand) bottled water really does have amazing properties. The ions in the water can transcend to pure helium, making the entire bottle lighter, almost blimp-like... Let me show you. May I have your bottle?"

The performer takes the spectator's almost empty bottle of water, uncaps it, and spills a little on his outstretched palm. He now smells the water, breathing in deeply and commenting:

"Yes, this is the real stuff... amazing. Here, you smell. Can you detect the faint scent of 'jasmine?' Upon ionization the water gives off that scent!"

The spectator looks a bit puzzled, being able to detect nothing, but the performer continues and provides proof...

"Would you just roll it back and forth, the remaining water will transcend to a higher state - the bottle will become lighter! It will make the bottle want to float off the table. It's a bit too heavy to actually do that, but you should see it try darned hard!"

After rolling the bottle flat on the table for a few seconds, the spectator lifts her hand and the bottom of the bottle rises up, off the table, following her hand.

"It almost does look like a blimp trying to take flight! Push it down flat again. Now release it. Look it really has become lighter!"

The sight of the bottle bobbing up and down is quite freaky. Especially as the other bottles have remained flat on the table throughout. Remember this can be the spectator's bottle.

"The transcended air is too dangerous to leave floating around,"

the performer offers to:

"...re-compress the molecules, removing all evidence of the ionization."

He instructs the spectator to once again press the bottle flat to the table, but to roll it in an East-West direction. This she does. Upon completion she lifts her hand and the bottle now remains lying flat on the table. The molecules inside the bottle now having returned to their normal state.

Further, the bottle is now uncapped and a little of the water tipped out onto your palm. Everyone can now smell the scent of jasmine! Even the spectator's water bottle will smell like jasmine all day long!