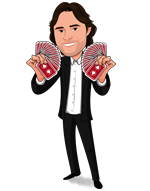 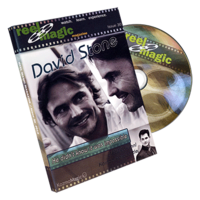 Today, when you order "Reel Magic Episode 30 (David Stone)", you'll instantly be emailed a Penguin Magic gift certificate. You can spend it on anything you like at Penguin, just like cash. Just complete your order as normal, and within seconds you'll get an email with your gift certificate.

FREE SHIPPING TO UNITED STATES ON ALL ORDERS OVER $50.
+ Add to Cart
Review Wishlist
In stock: usually ships within 24 hours!
Order in the next 11 hours 10 minutes and it will ship TODAY!
black-friday-2019
card
close-up
coin
dvd
Tweet

Feature Interview - David Stone:
David Stone talks to Kozmo about being influenced by the film "Rocky" and doing the impossible.

NEW! Social Media School
Rachel Armstrong and Tiffany Hindman tell you how to make your social media work for you!

David Regal - Tricks of the Trade
David reviews the half-rejected, well-respected, resurrected and the well-protected.

Dan Harlan "Value"
From "The Trade Show" - by L&L Publishing

Including the .pdf file, Magicseen, a European publication.