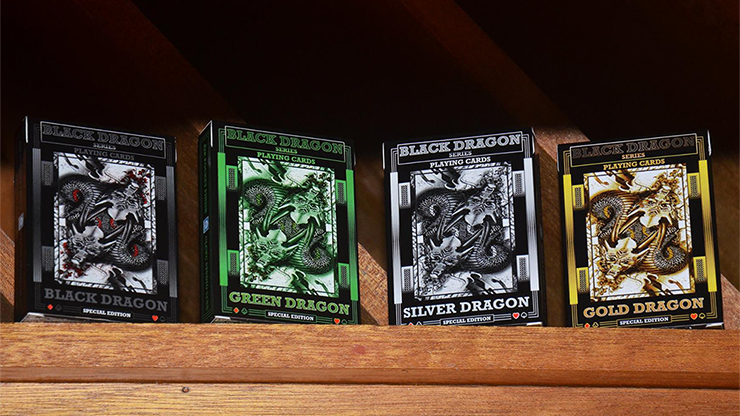 Today, when you order "Black Dragon Series Playing Cards (Standard Edition) by Craig Maidment", you'll instantly be emailed a Penguin Magic gift certificate. You can spend it on anything you like at Penguin, just like cash. Just complete your order as normal, and within seconds you'll get an email with your gift certificate.

The Black Dragon Series is playing cards reimagined. From unleashed dragons, samurais and Katana blades, to symbolic Koi fish representing an ancient legend, these cards are made to be used, but designed to capture the imagination.

How this deck series came to be...

The first image to take shape, which eventually played a major role in the Black Dragon Series of playing cards, was the "Black Koi" (featured as the Joker in this deck series). It was created by Marine Loup back in 2014 after she felt inspired by a legend about a group of Koi fish. The legend goes that through determination and perseverance, a single black koi was able to swim upstream to reach the top of a waterfall against all odds. It overcame demons that laughed at and mocked its efforts and who had also heightened the waterfall out of malice. According to legend, after reaching the top of the waterfall, the gods who had witnessed the koi's efforts turned the black koi into a Golden Dragon, the image of power and strength. This deck draws its inspiration from this legend and from Marine Loup and her Turning Japanese illustrations, and represents the determination and perseverance demonstrated by the black koi, battling against all odds to succeed. The black Koi, then, is the Joker, indicating that the demons made fun of its efforts to swim upstream.

Apart from being a great collector's item and featuring illustrations from world famous artist Marine Loup, these playing cards also have special design features applied to them, allowing anyone to perform a range of card tricks with ease. The deck is made from a high-quality card stock with added air pockets, allowing professional magicians greater card handling and card manipulation with these extra features and durability.

Black Dragon Series Playing Cards is a deck of premium quality cards, designed and produced to meet the needs of a broad range of card enthusiasts worldwide. The cards are made from a very professional 310gsm casino paper cardstock from France. The deck offers better handling and is more slippery due to the air pocket finish. Each card also contains the added quality of a black core layer center to block light shining through. The Black Dragon Series of playing cards is perfect for professionals who require top quality cards. With the superior card handling and durability that this deck provides, it is a great addition to any cardist's or magician's tool kit. It possesses added value by featuring illustrations by Marine Loup, thereby being a great investment for any card enthusiast and/or card collector. You do not want to miss out on the chance to own your very own set of Black Dragon Series playing cards before stock runs out.