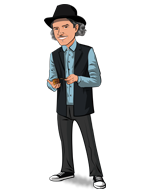 Today, when you order "Secret Art Of Coin Manipulation (With Jumbo Coins) by Eric Evans - DVD", you'll instantly be emailed a Penguin Magic gift certificate. You can spend it on anything you like at Penguin, just like cash. Just complete your order as normal, and within seconds you'll get an email with your gift certificate.

Eric Evans' stage manipulation has been compared to Fred Kaps, Cardini, and T Nelson Downs. Here he uses his real world stand-up routine to teach some of his most startling and entertaining effects and sleights.

Refined for over a decade in the fires of the street and conventional venues, and featuring priceless audience interaction, it is a fast paced flurry of a single coin that appears, disappears, transposes, penetrates, and transforms into a jumbo coin, that then multiplies to a seemingly endless number of jumbo coins with the all ultimately vanishing. (Specially manufactured Jumbo Manipulation Coins included.)

Designed for the ultimate usefulness as a learning tool, this DVD features indexes of over 30 sleights and moves explained with exacting detail by Eric, as well as the ability to quickly and easily navigate through effects and sleights without using the menus.