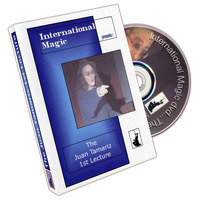 Today, when you order "Juan Tamariz 1st Lecture by International Magic - DVD", you'll instantly be emailed a Penguin Magic gift certificate. You can spend it on anything you like at Penguin, just like cash. Just complete your order as normal, and within seconds you'll get an email with your gift certificate.

Juan Tamariz, a world famous expert in the field of Card Magic, presents this 75 minute lecture where he imparts a part of his vast knowledge, to an appreciative audience of top magicians. As you watch the dedicated audience applaud every routine and take in every word, you'll begin to feel like you are in the room with them. Don't miss this chance to learn from the very best!

The first part of this recording is an entertaining performance in pure Tamariz style (as a bonus, this first part can be shown to your friends as a magical treat, without divulging any secrets). Juan takes us through routine after routine of excellent magic followed by some in depth explanation with invaluable knowledge for any card worker. He starts with a shuffled/un-shuffled routine, whereby a completely shuffled deck is bit-by-bit un-shuffled to an audience members requests. Spectator Locator:- In this, a freely selected card is amazingly revealed by a spectator who has his back turned throughout the routine. Three card Surprise:- An entertaining routine where Three 3's change into three 7's and then melt into just one totally different card. As you would expect with Tamariz, there's an excellent memory routine. A brilliant Follow The Leader (Tamariz style). Four Card Prediction:- Four predictions match four cards (Predictions written before the cards are chosen). Cards Across:- One by one three cards travel from one spectator to another, a superb method that defies explanation (until revealed later in the lecture). All this, plus a not to be missed demonstration of Colour Change Knives.

This performance is followed by some in depth explanation, invaluable to any student of Card Magic. The explained routines are Spectator Locator, Three Card Surprise, & Cards Across, but this is more than just an explanation of these three routines, this is a detailed explanation containing many tips and advice suitable to the performance of all card magic.