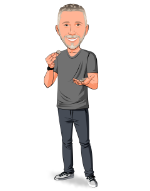 (1 reviews)
Out of stock. $25.00
The Synchronicity Pack (w/ DVD) by Marc Paul - Trick A spectator freely selects three cards from a deck and merely thinks of a fourth card. The spectator places the three cards in three different pockets. The performer instantly reveals duplicates of all four cards from matching pockets!. No pre show stooging, no bulging pockets indexes, and every

Pin (Gimmicks and Online Instructions) by Marc Paul - Trick With Pin, Marc Paul has created a super-simple, yet brilliantly ingenious way of gaining written information. The beauty of Marc's creation is that the PIN envelope may be freely shown before, during and after the effect. Basic Effect: A yellow envelope is shown to your spectators, they can see it h

Affected by Berglas (Gimmick and online instructions) by Marc Paul & Kaymar Magic - Trick Affected by Berglas is a commercial, practical and FOOLING Any Card At Any Number routine created by one of the best mentalists in the world, Marc Paul! Your spectator names ANY number between 1 and 52, with no forces! Another spectator looks at the cards and thinks of ANY of them - again, no force!
In stock. $19.95
+ Add to Cart