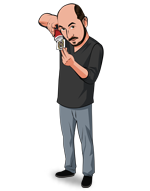 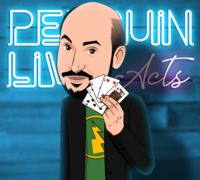 Today, when you order "Woody Aragon LIVE ACT", you'll instantly be emailed a Penguin Magic gift certificate. You can spend it on anything you like at Penguin, just like cash. Just complete your order as normal, and within seconds you'll get an email with your gift certificate.

"My greatest joy with Woody's magic is his contagious enthusiasm when performing and the genius of his explanations." - Juan Tamariz

"I love the way Woody thinks. His magic has given the term 'Spanish Armada' a new meaning." - Steve Beam

"Woody Aragon's magic is so clever, crazy and clean - the man should be required to wear a lab coat. Need a solid kick in the brain? Go see Dr. Woody!" - Pit Hartling

All Self Working Card Set:

Cut to Any Card- You ask if anyone in the audience has a deck of cards that is a different color back than the one you are using. They choose one card out of their deck. An audience member is asked to call out a number and the magician quickly cuts the cards and places their selection in the deck. Now that the deck is reassembled you count the cards and find that you placed their selection exactly at the named number. This is repeated once more with a number you call out. You cut the cards to that number, you count the cards and then you find their freely selected card at that position.
Think of a Card Routine-Spectator shuffles the deck. A member of the audience is asked to think of a card as you spread the cards in your hands. The deck is shuffled and separated in an entertaining way and you deal cards to the table one at a time until the spectator says stop. The final card is dealt to the table and turned over, it is the spectators thought of card.
Tarot/ Self Working TriumphThis is a self working triumph routine where the spectator makes all of the decisions. I use a tarot deck to demonstrate this effect but you can perform this effect with any deck of cards. All of the cards are mixed face up and face down by the spectator. While the cards are in their hands you reveal that magically all of the cards are face down except for their selection.
Poker Prediction--  The deck is cut, half of the deck is given to the spectator and you keep the other half. Both halves are shuffled and the spectator cuts the deck into four piles. The four piles is split in half. Two piles for the magician and two for the spectator. A second spectator chooses 5 cards from the magicians pile and makes a poker hand. The first spectator selects 5 card from his pile to make a poker hand. Once the poker hands are revealed you show that they have two pairs and you win with a royal flush in spades. You then follow up this effect by showing that you predicted the outcome at the beginning of the show.
Award Winning Speller- Learn the effect that won Woody the IBM Close-up Competion.

Purchase this product and on June 9th anytime after 12:00pm Eastern, click the MyPenguinMagic area at the top of the Penguin site. You'll see the "learn" button appear next to this lecture.

He did it again! Report this review
Verified buyer Pro Privacy ON (login to see reviewer names) on June 9th, 2019
And yes! Woody Aragon did it again!! Another outstanding lecture of Super Woody. Great material, almost self working, but as he says (always giving good advices) you have to rehearse it! The only thing I’m wondering, is how to do the final spelling routine (sensational!) IN SPANISH!!! In any case, another treasure, like the two preceding lectures.
2 of 2 magicians found this helpful.
Did this review help you? 1 comment

Woody=Magic Report this review
Verified buyer Pro Privacy ON (login to see reviewer names) on June 17th, 2019
Everything from woody is good if you follow the serious card magic highly recommended.
1 of 1 magicians found this helpful.
Did this review help you? Do you want to respond to this review?

Wow Report this review
Verified buyer Pro Privacy ON (login to see reviewer names) on June 10th, 2019
Wow!
Some may be turned off when they hear the term “self working” well as Dai Vernon once said “In magic, today as always, the effect is what counts. The methods used are always purely secondary."

Woody Aragon has taken some well known self working methods and camouflage them through presentation and psychology so that even the experienced magician would be fooled.

Only real tool you need to do this act is a false shuffle.

Strongly recommend this download.
1 of 1 magicians found this helpful.
Did this review help you? Do you want to respond to this review?

More than tricks Report this review
Verified buyer Pro Privacy ON (login to see reviewer names) on September 12th, 2019
Woody talks about the approach and philosophy of magic performance in this video than teaching tricks. This is so important.
Did this review help you? Do you want to respond to this review?

Woody Aragon Live Report this review
Verified buyer Pro Privacy ON (login to see reviewer names) on June 15th, 2019
I put his Tarot card routine into my act, Superb !
Did this review help you? Do you want to respond to this review?

Good ...but Report this review
Verified buyer Pro Privacy ON (login to see reviewer names) on June 20th, 2019
As always does Woody Aragon deliver good and self working material.
There are definitely good material that I have already used, but unfortunately can the spelling trick not be used in a non-english speaking country.
0 of 1 magicians found this helpful.
Did this review help you? Do you want to respond to this review?
Bestsellers 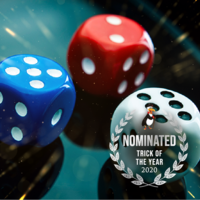