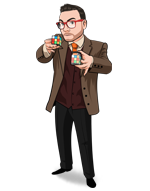 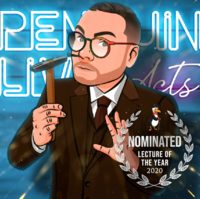 Today, when you order "Mark James LIVE ACT", you'll instantly be emailed a Penguin Magic gift certificate. You can spend it on anything you like at Penguin, just like cash. Just complete your order as normal, and within seconds you'll get an email with your gift certificate.

"You are one of the funniest people I've ever met."- Wayne Dobson

"Very few magicians on the planet have the talent you have."- Richard Sanders

"Mark is a real crowd pleaser. His magic is terrific and his comedy is for everyone. A real magic star on the rise."- Michael Finney

Fire Eating- Mark’s flashy fire eating opener gets the show to a flying start. Uses two torches and packs a bunch of laughs!

Chop Cup- Mark’s handling of the classic effect culminates in the production of a lemon and orange. Lot’s of audience participation without needing to bring anyone on stage.

Silk To Egg- Mark tips the real work on this classic of magic. A handkerchief turns into an egg but then the audience are immediately let in on the secret. The magician is using a fake egg. The trick ends with a big surprise when the audience find out the egg is real.

String Theory- Using the ‘Wisdom Of The Crowd’ theory, the audience is asked to guess the length of a ball of string. After calculating the exact average of their guesses, they’re astonishing to find out they were right.

Multiple Selection- Mark’s stage handling of the multiple card revelation plot. Seven cards are selected by the audience, lost into the deck and then found in increasingly impressive ways.

Word Box- Mark’s unusual second half opener is a blindfolded book test. Used to open his show at the Magic Castle in 2019, Mark enters already wearing the blindfold and performs a 3 word book test with the Bird Box novel. Each word is found with a hugely surprising but logical ending.

Human Blockhead- Mark gives his fun script and routine for the Human Blockhead sideshow stunt. This NEVR fails to get huge reactions.

Half Dyed Silk- Using all the same moves you learned from the Silk To Egg, Mark will teach you his logical and easy handling of the Silk To Egg. This routine makes total sense and handles like a dream.

Imagining Oz- With great thanks to Jim Steinmeyer, Mark teaches his psychological handling of a stage routine that can be performed with NO props. The audience all close their eyes and are guided through a story in the land of Oz. They’re then surprised to find that they were all thinking of the same character by the end. This is a fun routine with a VERY different vibe to anything in your act right now. It’s the perfect piece to change the pace or create some theatricality in your act.

Cigar Boxes- Mark showcases his cigar box juggling closer and gives some basic instruction on learning the routine. He also uses this as a jumping off point to discuss the theory behind finding and incorporating originality and original props in your act.

PLUS- Mark also shares tips on running your own show music, building a structured act, and how to engage an audience to give them a truly memorable experience

Mark James has worked professionally for over 15 years, on land and at sea in over 40 countries worldwide. He combines expert sleight of hand magic with comedy, juggling and other vaudevillian variety skills to create a unique and amazing show. Mark regularly performs at The World Famous Magic Castle in Hollywood, House Of Cards in Nashville and The
Chicago Magic Lounge as well as providing magic on The Orient Express.

The best show on pengiun ever! Report this review
Verified buyer Pro Privacy ON (login to see reviewer names) on May 11th, 2020
not only is the material here top notch, and the explanations and theroy and technics and logistics also.
the show itself is one of the best shows I've seen in my life and by far the best live show on Pneguinmagic in the 7 years I'v been following penguinlive lectures and acts, not only is the production value the highest , he is the most professional I have ever seen!!!
if I could give this lecture 10 stars I would!!!
buy NOW!!!!
5 of 5 magicians found this helpful.
Did this review help you? Do you want to respond to this review?

One of the Best LIVE Acts Report this review
Verified buyer Pro Privacy ON (login to see reviewer names) on May 27th, 2020
Mark delivers one of the best, well thought out and thoroughly entertaining lectures I've seen on some time.
At almost 5 hours it is entertaining every step of the way. Mark is such a nice guy and his passion for magic jumps through the screen. His 2 complete acts are packed with strong impactful magic, comedy, and loads of personal charm. Don't look at the list of effects covered in this lecture and write them off as classic or boring. Mark packs each routine with strong magic and comedy. He has worked out every detail and he shares it all with you.

If you are a stand-up performer or someone who wants to start doing stand up magic this lecture is a great starting point. Mark's magic is solid, his teaching is clear, and overall this is a highly entertaining and worth wild lecture.
3 of 3 magicians found this helpful.
Did this review help you? Do you want to respond to this review?

Interesting Report this review
Verified buyer Pro Privacy ON (login to see reviewer names) on May 14th, 2020
This is one of my favorites.I love the mixing of magic, mentalism, and sideshow. The shows were great to watch and the explanations were very good. You can add that to your show. Really good information and he gives a lot of sources if you want to dig in even deeper. Really enjoyed it.
2 of 2 magicians found this helpful.
Did this review help you? Do you want to respond to this review?

DC Report this review
Verified buyer Pro Privacy ON (login to see reviewer names) on September 19th, 2022
This is an excellent lecture. So many practical routines and ideas on this lecture and the thing that really stood out in this lecture was Mark's attention to detail. He goes into so much detail about the smallest things - from holding objects, pocket management and why he does certain moves to enhance the performance and effect. The advice on being yourself is the best I've heard - really great advice. I would highly recommend Mark's lecture 100 %
1 of 1 magicians found this helpful.
Did this review help you? Do you want to respond to this review?

Top Notch Report this review
Verified buyer Pro Privacy ON (login to see reviewer names) on November 18th, 2021
This was my favorite lecture to date. Practical and fun. I really liked his reasoning as to why he does what he does and all magicians should really listen as it was very insightful. Well done, Mark!
1 of 1 magicians found this helpful.
Did this review help you? Do you want to respond to this review?

Great from start to finish! Report this review
Verified buyer Pro Privacy ON (login to see reviewer names) on July 17th, 2021
Mark is a wonderful magician but he's an incredible entertainer. From start to finish, his act is fun and feels like a roller coaster. If you are considering buying this lecture, just do it.

I can't stress enough how much I enjoy seeing the full acts and discussing how they came to be. It's important for newer magicians to feel inspired and feel like they have the tools to build something of their own. I feel like this lecture does that... Mark's lecture will inspire you to look at classics of magic in a new way and gives you tips to customize them for yourself.

Deserves more than 5 stars Report this review
Verified buyer Pro Privacy ON (login to see reviewer names) on December 4th, 2020
Mark James absolutely kills it with this act! Being able to enjoy the first hour with family was so nice. And then to later perform these effects left them more impressed. Well worth the purchase no matter what type of magic you perform!
1 of 1 magicians found this helpful.
Did this review help you? Do you want to respond to this review?

That is what you call a polished act! Report this review
Pro Privacy ON (login to see reviewer names) on November 20th, 2020
Just got Mark James penguin lecture and I have to say it is one of the best, engaging and funny lectures I have seen. Some great workable material that anyone can add to their show. I can't recommend it enough - absolutely amazing! 10/10 👏👏👏👏👏👏
1 of 1 magicians found this helpful.
Did this review help you? Do you want to respond to this review?

Great Performance Report this review
Verified buyer Pro Privacy ON (login to see reviewer names) on July 17th, 2020
Mark's performance was terrific, but his explanations are even better. He covers all the details, and motivation, tips, and wonderful insights. I am excited to add some of his routines to my act.
1 of 1 magicians found this helpful.
Did this review help you? Do you want to respond to this review?

Beyond the magic Report this review
Verified buyer Pro Privacy ON (login to see reviewer names) on July 14th, 2020
Mark is a true pro. Everything is extremely refined. Tips and tricks beyond the magic. An excellent download.
1 of 1 magicians found this helpful.
Did this review help you? Do you want to respond to this review?
Load more reviews
Bestsellers