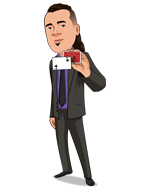 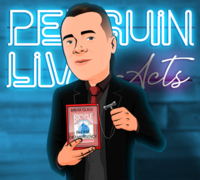 Today, when you order "Dan Harlan LIVE ACT", you'll instantly be emailed a Penguin Magic gift certificate. You can spend it on anything you like at Penguin, just like cash. Just complete your order as normal, and within seconds you'll get an email with your gift certificate.

"I've been in magic my entire life… I’ve also been International President of the I.B.M., so I've seen a lot… and this is the best I've ever seen." -June Horowitz

"Great to have you back for another lecture. Such an amazingly wide variety. In a word - wow!" -Gene Anderson

Nate Leipzig's Double Reverse- Spectator has half deck, I have half, we each select cards and switch them and return them in each other’s halves, the deck is re-assembled face-up 1/4, face-down 1/2, face-up 1/4, and with one hand everything is straightened out except for the two selected cards.

Poker Demo- I show 4 aces and a king and demonstrate how to deal them from the bottom, then the deck is re-assembled and I deal again quickly ending up with a royal flush.

Win/Win- Two spectators each think of one of fifteen cards, one of them is shown a few and awarded points if he sees his card, otherwise points go to the other person, this is done four times, in the end both cards are found in the locations related to the points earned.

Four Forces- Spectator finds the aces by pointing to one in a face-down fan, saying stop as I run my thumb along the edge, stopping me when dealing from the bottom, and the last one changes magically.

Counting On You- Spectator keeps track of the number of cards by holding up her fingers yet my cards always total four, at the end they become the four threes.

Harlan’s Collectors- Five chosen signed cards are returned in separate parts of the deck and shuffled, the four aces vanish one-at-a-time, and are revealed face-up in the center of the deck with the five cards interlaced face-down.

Dr. Jacob Daley’s Last Trick   Red and black aces shown alternating, I place two of the same color face-down onto spectator’s palm while I hold the other two, the aces switch places.

Immaculate Connection- Three cards are folded, their centers torn out, one is linked onto the other two, unlinked, linked again, torn off, and “restored” back into rings

As you know, Dan Harlan is the host of Penguin Live and mastermind of the Tarbell, Every Trick in the Book series.
He's also one of the most prolific creators in the world of magic with an extensive background in theater.
One of the most innovative modern magicians, Harlan's cutting-edge miracles are coveted by discerning connoisseurs of fine magic done well.
Harlan travels the globe performing and teaching incredible magic. Performing, writing, teaching, consulting, creating and lecturing, Harlan does it all.

And in this, his Emergency Card ACT, he introduces you to a few fascinating concepts and obscure principles underlying some of his work.

Excellent Report this review
Verified buyer Pro Privacy ON (login to see reviewer names) on June 30th, 2020
This is brilliant. Dan Harlan does magic with an ordinary, unprepared deck of cards (it could even be borrowed). The tricks are great; my favourite is the closing act "Immaculate connection" where Dan has - in my opinion - improved Paul Harris's trick. I am really glad I downloaded this.
4 of 5 magicians found this helpful.
Did this review help you? Do you want to respond to this review?

Beautiful Just Beautiful Report this review
Verified buyer Pro Privacy ON (login to see reviewer names) on August 12th, 2020
Dan Harlan Has skills to pay the Bills. I have used all these tricks several times. No gimmicks are required which is nice because most acts require props and gimmicks but for this you just need a deck of cards. They are good and you only need a lot of practice for Dan Harlan collectors and immaculate connection, the other trick you can master in just a day or 2. Their smart Methods and their all foolers.
1 of 2 magicians found this helpful.
Did this review help you? Do you want to respond to this review?

Harlan's Always Great Report this review
Verified buyer Pro Privacy ON (login to see reviewer names) on May 23rd, 2021
The maven & lover of explaining magic Harlan is always great!
Did this review help you? Do you want to respond to this review?

Great stand up card act Report this review
Verified buyer Pro Privacy ON (login to see reviewer names) on May 3rd, 2021
This lecture is really great for someone who wants to bring your card magic to a stand-up environment.

This is really worth the price. Dan teaching and nuance on this act is obviously tried and tested.

There are six tricks in this act which Dan mentioned could be performed as a stand-alone piece.

3 of them probably work best with the table even though with some modification could work on stage.

Another 3 work great on stage. I will definitely test some of this material in this lecture.
Did this review help you? Do you want to respond to this review?

Excellent Report this review
Verified buyer Pro Privacy ON (login to see reviewer names) on August 16th, 2020
Excellent
0 of 1 magicians found this helpful.
Did this review help you? Do you want to respond to this review?

One the top 10 Live Acts Report this review
Verified buyer Pro Privacy ON (login to see reviewer names) on July 5th, 2020
I have many decades of stage performance experience !
And I can tell you
they're only a selected few
individuals who have been granted the virtue of not only being a great artist and performer but a Grand Master of ceremonies person who is articulate astute in his craft & is able to speak
From a packed house to just a few in the audience

If you think it's easy grab the mic and be the Master of ceremonies one night !

You're either The perfect Host

or (in Sam kinison screaming voice)


I use the word consummate only when apropos one definition is

a consummate professional means to be a professional that is ideal or perfect in your chosen profession. This would include being knowledgeable, enthusiastic and inspiring while on the job.

This session features some serious high caliber material which
Dan was gracious enough to share
The material selected is fine tuned performance tested from one of the top experienced artist of the industry!

0 of 4 magicians found this helpful.
Did this review help you? 3 comments
Bestsellers