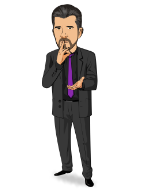 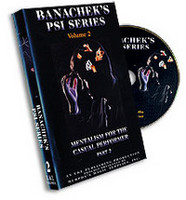 Today, when you order "Banachek PSI Series #2 w/ Stigmata", you'll instantly be emailed a Penguin Magic gift certificate. You can spend it on anything you like at Penguin, just like cash. Just complete your order as normal, and within seconds you'll get an email with your gift certificate.

Featuring the original version of Stigmata plus 7 other effects!

(6 customer reviews)
+ Add to Cart
Review Wishlist
In stock: usually ships within 24 hours!
Order in the next 1 hour 24 minutes and it will ship TODAY!
close-up
dvd
mentalism
street
Tweet

Make the value of a spectator's playing card slowly appear on your arm in blood red . . . anywhere, anytime! Reveal a thought-of number from across the distance separated by phone lines. Engage two people in a fun routine where the performer predicts a

page number and a word seen by a volunteer on an invisible Palm Top computer. Become a human lie detector in a thrilling and

comical adventure. This DVD continues from Part 1 with close-up, stand-up and stage mentalism and mental magic with additional

direction and sleight-of-hand into one smooth effect. Also, learn the inside secrets of what Banachek considers one of the most

powerful tools in the mentalist's arsenal, Pocket Writing. This DVD includes Banachek's discussion of his Buried Alive escape, his

Bullet Catch illusion now used by Penn & Teller, the difference between mentalism and mental magic plus comical anecdotes about

blindfold drives. You will also see a television clip of Banachek's Buried Alive escape hosted by William Shatner and TV footage of

one of Banachek's early Blindfold Drives.

Awesome mentalism DVD! Report this review
Pro Privacy ON (login to see reviewer names) on April 2nd, 2010
I am a huge fan of Banachek, including his Psi Series DVD set. This DVD is my favorite DVD in the set. The routines taught on here are extremely practical. Some of my favorite routines on this DVD include:

1. Phone Psyches
This is a fantastic phonebook prediction routine. It can be used for close-up or even adapted to stage. I have used this as my closer in my stage show for the past 3 years. This routine was the inspiration of a similar phonebook prediction effect that I came up with. Here is a clip of me performing that variation a few years ago: http://www.youtube.com/watch?v=YQYbP4bSV38

Overall, this is a fantastic DVD. Banachek's Psi Series DVD set is phenomenal and I highly recommend you pick it up!
2 of 2 magicians found this helpful.
Did this review help you? Do you want to respond to this review?

Don't Buy Only for Stigmata Report this review
Verified buyer Pro Privacy ON (login to see reviewer names) on October 6th, 2007
I bought this DVD specifically for Stigmata and was disappointed. If you don't know anything about performing Stigmata this DVD is sufficient. But if you basically understand how Stigmata is performed and are looking for good instruction on performing it well you will also be disappointed. The explanation of it is very, very, brief.

However, the rest of the items on the DVD make up for the Stigmata section. Banachek's explanation of the Invisible Palm Computer, Picture Duplication, and the item where a person picks a word at random from a book are particularly good.

But don't buy this if you specifically want to learn Stigmata.
2 of 2 magicians found this helpful.
Did this review help you? Do you want to respond to this review?

Highest Recommendation Report this review
Pro Privacy ON (login to see reviewer names) on September 6th, 2014
My private mentalism library contains dozens of DVDs by many of the best in the industry. If I could only keep one set, it would PSI Series by Banacheck.

They are so good.

Banachek is a very convincing performer, and an excellent teacher. The production values are very high, and the routines are strong. Within the 4 DVD set he performs and teaches two different drawing duplications, one close-up and one stage.

If you want to learn mentalism, and were going to make one investment for the year, getting the PSI Series 4 DVD set, then practicing and performing the material for the next 12 months, would be an incredibly beneficial investment of your time and money. Master the material and performance subtleties taught in this DVD set and people will be convinced you can read their minds, can bend steel with your thoughts, and so much more.

Close to REAL magic Report this review
Verified buyer Pro Privacy ON (login to see reviewer names) on January 27th, 2007
This is an amazing DVD. If you are a magician getting into mentalism or a mentalist already, or just whatever this is this dvd for you! First of all, if you want to learn full out mentalism Banachek is the way to go. He's modern, and his intructions etc... makes amazing sense. He covers everything. In this DVD I especially like STIGMATA, and NUMBER REVERSAL, and PHONE PSYCHS. If you are into criss angel/ david blaine kinda stuff, stigmata is THE effect (I also hear bruised is too BUT) THIS IS IMPROMPTU. Great for cards etc... also I bought Psychopysiological thought reading and it pairs well for a neat muscle reading revelation. Number Reversal is fail proof and Phone Psychs Is like true mentalism to your audience. The only reason why I didnt give the DVD 5/5 stars is because Banachek goes just a little fast at some points in the explanations.
Did this review help you? Do you want to respond to this review?

im psychic Report this review
Pro Privacy ON (login to see reviewer names) on July 19th, 2006
this dvd is absolutely amazing. ring of truth and the phonebokk effects are absolutely great! i love them and think banachek is great.


buy this now. its a little $$$ but fir what its worth i think you shouldget it
Did this review help you? 1 comment

Learn from a legend. Report this review
Pro Privacy ON (login to see reviewer names) on April 3rd, 2010
Banachek is probably one of the finest mentalists around at the moment and I was amazed that he was giving away some of these effects because I've seen him use a few of them on talk shows and such like. I would recommend getting all of them (theres four in total) but this is the best one of the four.
0 of 1 magicians found this helpful.
Did this review help you? Do you want to respond to this review?
Bestsellers