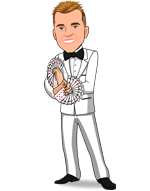 Today, when you order "Wayne Dobson LIVE", you'll instantly be emailed a Penguin Magic gift certificate. You can spend it on anything you like at Penguin, just like cash. Just complete your order as normal, and within seconds you'll get an email with your gift certificate.

Wayne Dobson teaches us the magic that made him famous! SUPPORT LIVE MAGIC. DOWNLOAD THE FULL LECTURE TODAY.

His talent for blending witty humor and wonderful magic won him work as an opening act on tours with top U.K. performers and landed him a comprehensive American tour which had him entertaining in Las Vegas, Hollywood, Los Angeles, Atlantic City and more.

At the height of his fame he even had his own television series entitled "Wayne Dobson - A Kind of Magic." Unknown to the public at that time, he had also been diagnosed with Multiple Sclerosis and knew it would eventually limit his mobility, but he continued working to his fullest potential. In the face of such adversity most would be tempted to give up, but Wayne rose to the challenge, and continues to be an inspiration to us all.

In this Penguin Live lecture, Wayne shares many of the high points of his career and teaches you the magic that got him there. Of course, he's still gifted with a quick wit and razor-sharp intelligence as you'll see in his version of the tossed-out deck. And, he displays his commitment to interesting presentations as he uses a number of invisible props leading to one visible, folded card in a purse.

Then, Wayne treats you to one of his most famous signature pieces as Alice selects a word and he tries to discover it with hilarious results.

Next, when a chosen card vanishes from the deck, Wayne gets to the bottom of it by revealing that the spectator has been sitting on the whole time.

Then, Wayne shows just how clever he is as the spectator randomly finds a lucky card which just happens to exactly match Wayne's lucky card.

In addition to live performances, you also get to enjoy early video of Wayne's Lightning Matrix and his coins through wand routine. Plus, many awesome card tricks. And, all of the video routines are well-taught by Wayne's friend Mike Sullivan.

Of course, you'll love the magic and all the laughs we share as you get a chance to hang out with a truly delightful and inspirational magician. The great Wayne Dobson, right here at Penguin Live.

If you've never been to a magic lecture, there's never been a better time. Sunday, May 24th, at 7:00pm, we're airing Wayne Dobson LIVE in a spectacular 2-hour online lecture. Watch, ask questions, and learn things you won't find in any book or DVD.

Commercial, workable material for the real world Report this review
Verified buyer Pro Privacy ON (login to see reviewer names) on May 25th, 2015
What I love about this lecture is Dobson's material is so commercial and very workable. When I am performing close-up, I don't want to worry about an over-abundance of sleight of hand. I love stuff that is easy to perform and creates moments of wonder and amazement. I had heard so much about Wayne's Tossed Out Deck, and it really is a nice solution.

Dobson also performs a one card version of Brainwave, and it was impressive. Not sure I would do this, but it was nice.

Echo was a fabulous card effect that I will use in a show in August. It's sort of a one-deck You Do As I Do, though it is more You Say as I Say (which is where the Echo comes in), with a kicker ending of Card to Impossible Location. Wonderful effect.

Wayne does a two-person mind-reading effect with a lady, and it is a great piece of comedy. It is a dual-reality effect in the sense that the audience is led to believe the assistant has correctly divined a word thought of. Wayne asks a bunch of questions about the word, and the assistant writes down what he believes. As the audience clearly sees the word written, they get a great deal of laughs as Wayne continues to ask questions about the word. At the last moment, the assitant realizes at the end he has the wrong word, he marks it out (though it is still readable), and he writes the new word and gives the lady the word he wrote down. This cancels out the dual-reality, which is not used as a method, but as a tool for raising the entertainment value.

My Lucky Card was absolutely brilliant. It is a three-phase effect. The first two phases are framed as sort of a full deck memorization effect, but it comes across as feeling like an ACAAN effect. The spectator never chooses a card during the first two phases, but the way Wayne presents it, it does feel like he is revealing the spectator's cards. The spectator then picks his lucky card out of the deck, and it matches the card Wayne has had face down, half pulled out of a card envelope. Stunning. I really love this one. If I would have paid $30 for this alone, it would have been worth it.

His Lightning Matrix is nice, and it is probably a version I would actually try. Beautiful handling and nice cover for when you have to do your move.

Coins to the Glass is a nice presentation for a Coins Across routine. I came up with my own version of Coins Across, but I like the addition of the glass. It adds nice visual and aural elements.

Cap and Pence is a nice effect, though not for me.

Point of Departure is a visual card sandwich effect where the selected card vanishes from between two cards and ends up in the deck reversed.

Wayne's next piece was The Sandwich Trick, which is an Ambitious Card type of effect with the chosen and signed card ending up sandwiched between the two cards used in the previous effect.
11 of 11 magicians found this helpful.
Did this review help you? Do you want to respond to this review?

Excellent! Report this review
Verified buyer Pro Privacy ON (login to see reviewer names) on May 25th, 2015
Obviously, one of the greats of magic that actually shared some of his signature and commercial effects. As a disabled man that still lectures and performs, Mr. Dobson is an inspiration.
4 of 5 magicians found this helpful.
Did this review help you? Do you want to respond to this review?

Wayne Dobson LIVE Report this review
Verified buyer Pro Privacy ON (login to see reviewer names) on May 31st, 2015
Great lecture, really enjoyed watching it! A big thumbs up from me :D
1 of 2 magicians found this helpful.
Did this review help you? Do you want to respond to this review?

Great material Report this review
Verified buyer Pro Privacy ON (login to see reviewer names) on July 19th, 2017
I enjoyed this lecture. Good to see Wayne fighting the good fight.
I was primarily interested in his Invisible deck effect which is well treated here and confirmed my understanding of how he did it.
Some interesting coin handling as well.
Did this review help you? Do you want to respond to this review?

He's showing a great handling of the Eat trick, which I'm using on stage.

His Lucky card. It's a reputation maker.

My personal favorite trick is the trick that the spectator does for you, where the effect is that the card DISAPPEARS from the deck, and ends up under their butt. And they say "it's because I'm sitting on it."

There are some very very sneaky tricks here, and they are effects you WILL use.

His 4 coins to glass is great! Continuous do-as-I-do is fantastic!

worth every penny Report this review
Pro Privacy ON (login to see reviewer names) on November 29th, 2015
Wayne Dobson provides some truly amazing magic tricks that you will use.
I loved the mnd reading effect with the woman, this is a definate worker
Did this review help you? Do you want to respond to this review?

A legend Report this review
Verified buyer Pro Privacy ON (login to see reviewer names) on August 6th, 2015
Wayne has always for me been a legend and an inspiration and long may he be so excellent lecture and trust I have a few
Did this review help you? Do you want to respond to this review?

It's wayne dobson you know its good.

Almost every routine is a winner, especially my lucky card. What a fun three phase card effect.

Good stuff!
Did this review help you? Do you want to respond to this review?

Great Lecture Report this review
Verified buyer Pro Privacy ON (login to see reviewer names) on June 1st, 2015
Loved all the effects and Wayne has lost none of his humour. My Lucky Card is superb and is an effect everyone will use. The Sex trick is first class, but the presentation on the lecture is not as good as that sold at Alakazam and that I saw performed at Blackpool. The scoring out of the word doesn't work for me. It is better with the change
That however did not detract from a well structured lecture, which i give full marks to.
Did this review help you? Do you want to respond to this review?

Wayne is great as always Report this review
Verified buyer Pro Privacy ON (login to see reviewer names) on May 31st, 2015
It doesn't matter that he's wheel chair bound his mind is still developing great magic. In his lecture he teaches several effects that the ad copy didn't do justice to. I wondered about them but the ads didn't give me enough to decide on. Wayne teaches a few of these and now that I see the routine even though you still need to buy the workings, I now know what they are about and will make the purchase. Entertaining as all get out and while Wayne's mike could have been adjusted for volume as I had to turn it up for that but then got my eardrums busted by the applause that followed. The content and to learn from a master is what matters.
0 of 1 magicians found this helpful.
Did this review help you? Do you want to respond to this review?
Bestsellers