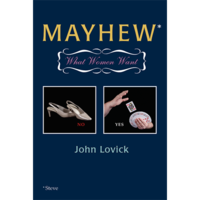 Today, when you order "Mayhew (What Women Want) by Hermetic Press - Book", you'll instantly be emailed a Penguin Magic gift certificate. You can spend it on anything you like at Penguin, just like cash. Just complete your order as normal, and within seconds you'll get an email with your gift certificate.

All in all, the magic is magical. The comedy is funny. The methods are inspired, and inspiring. I don't know what more you could ask for from a book, but whatever it is, you don't need it. Buy this book and enjoy it.- Curtis Kam There is enough really good material here to make it a book magicians will want.- Eric Mead Steve Mayhew has been a widely respected and groundbreaking close-up performer for many years. His presentations and magic have long been recognized for their pronounced originality, by those who have seen him perform and who have read the few of his tricks that have appeared in hard-to-get publications. Mayhew's material is being performed by some of the world's most respected card magicians. All those tricks and many previously unpublished ones are collected here, in their newest forms, many with full presentations: six generous chapters of card tricks, gambling routines and sleights.Included:Freedom-Face-up cards are unquestionably shuffled into face-down ones. You then proceed to deal all the face-up cards rapidly from the deck, finishing with the four Aces and leaving only the face-down cards undealt. This one went into the repertoires of top pros as soon as it was published. Hungry Now-The red Aces are buried in the deck. A freely selected card is then cleanly dropped onto the pack, upon which the red Aces instantly appear there and trap the selection between them a feat so visually striking and physically demanding, even Dan and Dave Buck were impressed. Wet or Black?-A spectator cuts the deck into eight piles while answering several intimate questions. The last question is "Red or black?" He answers. When the top card of each of his eight piles is turned up, it matches his freely named color! Das Kapital-A 0 Bill Switch routine that gives fresh meaning to the idea of throwing money away, at the cost of only and a few red carnations per show. Many consider this the finest and funniest Bill Switch routine ever conceived. All these and over forty more items are bound here in one convenient 6" x 9" package of 294 pages, photo-illustrated and in hardcover.