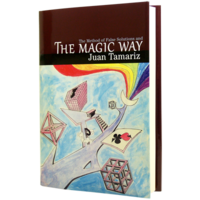 Today, when you order "The Magic Way by Juan Tamariz", you'll instantly be emailed a Penguin Magic gift certificate. You can spend it on anything you like at Penguin, just like cash. Just complete your order as normal, and within seconds you'll get an email with your gift certificate.

The most insightful magic theory book you can get. Magic Way will change how you perform. LAST CHANCE UNTIL 2019.

"Juan Tamariz will fool you. And that’s because he knows how you think. He knows the questions you ask yourself about the magic you just saw. And one by one he answers those questions in a way that leaves you baffled long after the performance is over." -David Britland

"Of the handful of magic's most important theoretical works, none is any more important than THIS. It's a roadmap to how to create REAL MAGIC." -Jamy Ian Swiss

"This book is an experiential map of the audience's mind. It will take your performance to the next level." -Michael Weber

"One of the honors I've had in my life is to have known Jay Marshall, who absolutely loved magic books. Over the decades I knew Jay, he very rarely recommended any magic book to me. Except for one time. He came back from FISM, he walked in the door of Magic Incorporated, opened up his suitcase took out 2 books, set them on the counter in front of me. Didn't say anything else other than READ THESE, then he walked out. I picked up the books. One of them was the Five Points in Magic, one of them was The Magic Way. Magic Way indeed. It has led me to be a better magician. It has improved the way I construct my magic. My oil and water Neomix would not EXIST if I had not read the magic way. If you embrace what Juan teaches, if you live what you learn, it will make you a better magician. Your audiences will no have any concept of how your magic is done. And for that, your audiences will be perpetually grateful to you, and we should be perpetually grateful for Juan for the theories he has taught us. Get the magic way, and embrace it. You WILL become a better magician for reading it. And if you think I don't embrace it myself, I even went to the effort of making a wristband that says 'la via magica' which is 'the magic way'. And I wear it every day. That's how meaningful the magic way is to me. Get the book, and you will see how meaningful it will be to you, and to your audiences." -Jim Krenz

"Juan Tamariz is not only like a brother for me since so many years, but a real mentor at the same time. This book is a wonderful travel thru magic, and whatever is your level, from beginner to advanced magician, your magic will be much better at the end of the journey." -Gaetan Bloom

"If you want your magic to be stronger, more impossible, more real, The Magic Way is your way." -Miguel Angel Gia

"One of the most powerful books put out on magic and mentalism. It's the way we think about magic." -Paul Draper

"The Magic Way is Juan Tamariz's most insightful look into the effect, and into what makes magic effective and deceptive. He clearly explains how you can prove all possible solutions wrong in the minds of the spectators, trapping them in a bubble with no exit, producing the sensation of true magic." -Rafael Benatar

"Juan Tamariz is the Leonardo Da Vinci of our time." -Christian Engblom

"Tamariz's theory eliminates all possible solutions, leading the audience across the rainbow into WONDERLAND." -Roberto Giobbi

In The Magic Way, Juan Tamariz teaches you not just great tricks, but a way to make every trick you do better and more magical. From the moment it appeared in 1987, The Magic Way was recognized as one of the world's great books on magic. It has been long out of print and highly sought after. This new edition of The Magic Way brings to magicians everywhere the magic and remarkable thinking of one of our greatest living magicians. Over a period of five years, Juan Tamariz has corrected, revised and updated his classic text. This newly translated edition of that revised work might have been called The Magic Way Repaved. The Magic Way is an in-depth study of how any magic effect may be improved until its method becomes so impervious to discovery that audiences simply relax happily into the experience of the impossible. Tamariz's "Theory of False Solutions and The Magic Way" is explained more clearly and fully than ever before, with detailed examples. These examples are not just exercises constructed to illustrate a point. Tricks and full routines taken from Juan Tamariz's working repertoire are explained in depth, and then meticulously analyzed to show how his theory is applied. You will gain new performance pieces, polished by a master, and something even better: a new tool that will allow you to make every trick you do more amazing. That is why The Magic Way has earned its reputation as a book no serious magical performer should be without. In The Magic Way, Juan Tamariz teaches in full some of his most prized tricks and routines. Among them are...

All these effects pull audible gasps from the public and magicians, and they have been perfected through hundreds, if not thousands of performances. And while teaching them, Tamariz carefully shows how his "Theory of False Solutions" works. It is really much more than a theory. It is a well-considered plan for making any magic effect more baffling, and its secret more impossible to discover. For those who desire to get maximum entertainment and astonishment from their magic, studying The Magic Way may be the most valuable resource you will ever find. It is also a highly remarkable exploration of how one of the world's unquestioned masters of magic thinks and approaches every trick he does. The title really reflects the contents perfectly. This book is... THE MAGIC WAY Pages: 296 - 7.5" x 10" - Hardcover - photo-illustrated
Questions about this product

Great Book High Recommend Report this review
Verified buyer Pro Privacy ON (login to see reviewer names) on October 16th, 2016
The Magic Way by Juan Tamariz, is bound to be a classic from one of the worlds greats. A wonderful edition to his other works. Read the description of the book it is exactly what you get, so don't be surprised when it is. Understanding Tamariz theory is not for everyone obviously, however if you take the time to really work and apply the principals in this and other books by Tamariz, your magic can not help but improve. A great book with fantastic information. Highly Recommended to all!
5 of 6 magicians found this helpful.
Did this review help you? Do you want to respond to this review?

Game Changer Report this review
Pro Privacy ON (login to see reviewer names) on December 11th, 2017
I bought this book when it was first published in 1987 and the thinking within has affected every single performance I have ever had since. Understand this material and your magic will be elevated to the highest level. This is truly "The Magic Way"!

Sean Tretheway - The Noosa Magician (since 1984)
3 of 3 magicians found this helpful.
Did this review help you? Do you want to respond to this review?

Your magic grows by infinity with this book Report this review
Pro Privacy ON (login to see reviewer names) on December 11th, 2017
When you read this book, you see that Juan is not just writing his thoughts then having them edited. You see that you are reading directly from his heart.

Little light bulbs will go off in your head. Flashes of insight as each page, each paragraph, each sentence has multiple layers for you to explore. And as an Explorer you must be patient and dig and dig and search and search

You will read it again.
And more lights.

Read it again and still more insight and more lights.

As you learn Juan's way, your magic will then begin to light up your mind, the room, the theater and your audience in the glow of what magic really is.

No book is more important than "The Magic Way".
3 of 4 magicians found this helpful.
Did this review help you? Do you want to respond to this review?

awesome and thoughtful Report this review
Verified buyer Pro Privacy ON (login to see reviewer names) on January 2nd, 2018
Tamariz's analysis may seem overly concrete to some but it is an example of a thoughtful deconstruction of the structure and theoretical possibilities of a number of classic effects. It should be how magic is taught to novices, and experienced magi who need to think. It could be improved by 1) actually having an appendix where Tarmariz gives his take on some of the common sleights, and 2) an ending section where he puts it all together -- but that's not a criticism, it is just a desire for more Tarmariz
1 of 1 magicians found this helpful.
Did this review help you? Do you want to respond to this review?

the magic way Report this review
Verified buyer Pro Privacy ON (login to see reviewer names) on August 7th, 2018
this book is a keeper 'well thought out and set to become a classic, buy it you won't be disapointed. errol
Did this review help you? Do you want to respond to this review?

The Magic Way by Tamariz Report this review
Verified buyer Pro Privacy ON (login to see reviewer names) on January 3rd, 2018
Long out of print, I was excited to get a copy. Not a text that teaches you a trick, but rather a treatise on construction of effects and how to deal with logical explanations. This book requires serious study, and as Juan is probably the best magician alive, his thoughts are very significant.
Did this review help you? Do you want to respond to this review?

The Magic Way Report this review
Verified buyer Pro Privacy ON (login to see reviewer names) on August 3rd, 2018
I like this book as it will show how to make your magic look like real magic....this teaches the way to cause the mind to run up against a wall, where there is no possible explanation other than it's magic
0 of 1 magicians found this helpful.
Did this review help you? Do you want to respond to this review?
Bestsellers