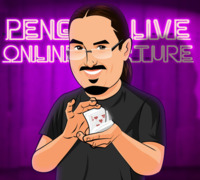 Today, when you order "Dani DaOrtiz LIVE 3", you'll instantly be emailed a Penguin Magic gift certificate. You can spend it on anything you like at Penguin, just like cash. Just complete your order as normal, and within seconds you'll get an email with your gift certificate.

One of the most original card magicians in the world reveals just how calculated his unconventional style really is. SUPPORT LIVE MAGIC. START LEARNING TODAY.

"Dani is everything I love about magic." - David Blaine

As you know, Dani DaOrtiz is one of the best, and most original, card magicians in the world. Combining subtle techniques and silly humor, his unconventional style seems improvised, but in this (his third) Penguin Live lecture, he reveals just how calculated it really is.

He begins by borrowing two decks and having someone take any card out of one of them. Another person in the audience names any number they like. Is it possible that THAT card is at THAT number in the other deck? As you'll soon discover, with Dani DaOrtiz... anything is possible!

Next, as he cuts cards to the table, four people say, "Stop," at any time to make four random piles, leaving him exactly ten cards. Which doesn't seem too significant... until he reveals that each person stopped him precisely on the four tens from the deck.

Also, a spectator thinks of any suit, changing his mind a few times. Everyone else grabs cards from the deck. Without looking at their faces, Dani finds ones that match the thought-of suit. The only thing that would be more impressive is if all the random cards matched the thought-of suit... and they do.

Then, he finds two named cards from a shuffled deck placed into his pocket. It's his extra-deceptive take on a classic card problem, and you'll love it.

And finally, multiple people shuffle while one of them peeks at a card. Everything is collected and the spectators take turns deciding which cards to eliminate until only one remains. And it sounds impossible, because it should be, but the last card is the very one secretly peeked at earlier.

In addition to the impressive tricks, Dani also shares the basis of all his psychological forces, which rules in magic to break and why, and so much more.

In performance, he seems to be the picture of complete nonchalance, even going out of his way to help randomize an already chaotic performance. Yet, miracles happen with the utmost, and ironically unexpected, regularity.

Everyone is talking about him. His methods are unique, his presentations brilliantly entertaining.

Incredible magic from one the world’s most astonishing magicians… Dani DaOrtiz!

The absolute best source on Forcing ever!!! Report this review
Verified buyer Pro Privacy ON (login to see reviewer names) on December 4th, 2017
If you want to learn how to force anything , a number of cards, a card or when converted to mentalism rouitnes - any object in the room. this is the lecture for you.
The amount of detail and thought that goes in to the teaching of Dani's superior classic force is unbelievable.
Do not hesitate add to cart now along with the two other previous of Dani's lecutres.

Even if you don't do card magic, there are lessons learned here for everyone at any technical skill level
4 of 4 magicians found this helpful.
Did this review help you? Do you want to respond to this review?

Here the emphasis is much more on his use of psychology in the structuring and presentation of tricks, although he does touch a lot on forces, creating the impression he never touches the deck, and just dozens of other little subtleties which contribute to the overall impression one gets.

There is a lot to learn, and the first hour alone is just packed with dense practical theory and examples on how to improve ones magic. I watched it twice back to back, the first time as a straight run through, the second in large chunks. There is a lot to learn and absorb here, Dani will give an incredibly practical and easy to implement tip in just a throwaway sentence, so there is a lot of value in rewatching, I highly recommend.

Also in case anyone was curious, he does reference some of his previous lectures, but not in any way that you need to have them in order to understand what he's saying (although you might as well get them as they are full of gold as well).
4 of 4 magicians found this helpful.
Did this review help you? 5 comments

Master class! Report this review
Verified buyer Pro Privacy ON (login to see reviewer names) on October 15th, 2018
Don't be put off if you are a beginner. This is some of the best material you will learn!
2 of 2 magicians found this helpful.
Did this review help you? Do you want to respond to this review?

Always Great, but this time GREAT!!!! Report this review
Verified buyer Pro Privacy ON (login to see reviewer names) on March 2nd, 2017
I have seen Dani lecture several times, both live and on video. I own his four DVD of lectures and love them. I hesitated to buy this because I had seem him so much. I am so glad that I didn't. This was pure gold. The lecture deserves to be watched again and again, just to get every drop of brilliance. I cannot recommend this enough. Get it and your magic will get better by listening to Dani.
2 of 2 magicians found this helpful.
Did this review help you? Do you want to respond to this review?

it's worth it Report this review
Verified buyer Pro Privacy ON (login to see reviewer names) on March 19th, 2021
It definitely worth it but some trick or forces do not work 100 percent of the time. They are little risky, but some tricks here look impossible but so easy to do!
1 of 1 magicians found this helpful.
Did this review help you? Do you want to respond to this review?

Practical Theory in addition to great effects. Report this review
Verified buyer Pro Privacy ON (login to see reviewer names) on August 15th, 2018
This was an excellent seminar, a bit long winded at times, however there were many practical take-aways from this. Dani's tips on how to make your already existing magic routine play even better for your spectators is very useful... one of those "ooohhhhhhhh" moments for me when what he was saying clicked. You'll also learn very useful mechanics in this lecture, things that seemed so obvious that I couldn't believe I didn't think of it. I love how his mind works, very down to earth and incredibly smart.
1 of 1 magicians found this helpful.
Did this review help you? Do you want to respond to this review?

Great Lecture Report this review
Verified buyer Pro Privacy ON (login to see reviewer names) on June 23rd, 2018
A wonderful magician and a very interesting lecture. You learn a lot about psychology, gestures and attitude.
1 of 1 magicians found this helpful.
Did this review help you? Do you want to respond to this review?

Masterclass Report this review
Verified buyer Pro Privacy ON (login to see reviewer names) on November 30th, 2017
it is awesome. Fantastic lecture I could not stop watching it. It is really useful for pro magician. It is all about entertainment how to do your show. Highly recommended.
1 of 1 magicians found this helpful.
Did this review help you? Do you want to respond to this review?

Best money I've ever spent in magic Report this review
Verified buyer Pro Privacy ON (login to see reviewer names) on November 23rd, 2017
Dani DaOrtiz is truly a master of card magic! Awesome teach, very claer and perfect method. Definitely recommend it if u are into the psychological part of magic. Could easily cost much
1 of 1 magicians found this helpful.
Did this review help you? Do you want to respond to this review?

best lecture ever! Report this review
Pro Privacy ON (login to see reviewer names) on September 14th, 2017
bestlecture ever!
1 of 1 magicians found this helpful.
Did this review help you? Do you want to respond to this review?
Load more reviews
Bestsellers