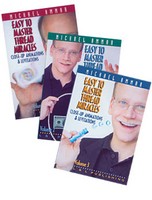 Today, when you order "Michael Ammar - Easy to Master Thread Miracles - Set (Vols. 1-3)", you'll instantly be emailed a Penguin Magic gift certificate. You can spend it on anything you like at Penguin, just like cash. Just complete your order as normal, and within seconds you'll get an email with your gift certificate.

There is more powerful potential in just a few feet of invisible thread than almost anything else in magic. This is magic that becomes the stuff of legends. No matter what type of magic you perform, from the purest sleight of hand to the largest grand illusions, this is the type of magic that creates conversations and reputations. People vividly remember the moment they saw something levitated and animated just inches away from their eyes. Continuing in the Easy to Master tradition, this new set of videos is organized in a very structured fashion, taking the viewer from simple animations with short lengths of thread that can be easily set up and managed through intermediate effects that are a bit more involved and finally ending up with elaborate effects that are truly mind-bending. Each video in this series also contains valuable supporting information on lighting, concealment, and theory that will stimulate your thinking well beyond the featured magic.

Our journey begins with one of the newest, most fascinating genres in all of magicthe incredible invisible elastic thread created by DuPont and patented in 1959. Youll discover what it is, where to find it, and the amazing things you can do with it, including Finn Jons killer applicationthe invisible elastic loops. Youll create truly astonishing animations and levitations almost anytime, anyplace using this and other applications featured on this video for the first time.

Following this we look at the close-up animating ability of visible, but hidden threads. This section contains the most practical, commercial method for performing Stefan Schutzers Self-Folding Bill ever revealed.

Then after learning the best of the classic magic for the stand-up performer using the Traditional Reel, including an amazing, visual penetration of the mike stand, James George joins Michael for an overview of one of the most compelling inventions of the last 50 yearsThe Invisible Thread Reel. Youll see a complete comparison of the wide range of I.T.R. gimmicks, featuring full screen close-ups of exactly how to work with and reload this powerful gimmick.

We begin with amazing ideas and applications of the James George Invisible Thread Reel, which includes marvelously deceptive methods of passing a solid hoop over and around floating objects that are marvelously deceptive. Also included are methods for working with threads from 6 inches to twenty feet long that create magic that people will talk about for a lifetime.

Section 4  The One Point Hookup

This is the real work on storing, transporting and accessing the invisible threads youll use for any type of effect. The majority of this information is being revealed here for the first time in any format, and represents ideal solutions for almost any close-up, stand-up, corporate, bar or restaurant performer.

Youll also find sources for invisible thread well worth the price of the video to anyone seriously interested in performing magic with thread. Youll see what types of thread are strongest, ranked in order of strength according to similar dimensions, and how to separate and secure individual strands of the finest invisible thread.

Some of the information featured here has previously been sold individually for large sums of money. Youll learn the exact method Ammar used to perform the Floating Bill on The Tonight Show, as well as the Steve Fearson Hookup, which creates what some of our greatest minds have called the most amazing magic theyve ever seen!

Section One - Thread Strength According to Similar Diameters

More than enough to get started Report this review
Pro Privacy ON (login to see reviewer names) on April 3rd, 2019
Michael Ammar is a true artist and master when it comes to the world of magic. With just these 3 volumes Michael breaks it down step by step to give you what you need to preform dozens of effects with cards. Not only is the camera work top notch, Michael takes it a step further and gives you the psychology of each effect! This is really worker stuff! Just picking out only 5 of these gems will give you an evening show! This is a must have product. Worth it at twice the price. (although a true bargain whatever the price)
Did this review help you? Do you want to respond to this review?

Great Report this review
Pro Privacy ON (login to see reviewer names) on April 8th, 2010
Awesome. Michael Ammar has selected some great effects here and what's great is that they're all useable in the real world. There's a little bit of tricky setting up but certainly nothing too complicated (like some magician's try and market). I brought all three DVDs and I would recommend you do the same because each DVD has some great tricks on it!
Did this review help you? Do you want to respond to this review?

Encyclopedia of IT Report this review
Pro Privacy ON (login to see reviewer names) on April 8th, 2010
This set is like an IT encyclopedia. Like Ammar's Easy to master Card miracles, and money miracles, This set takes you through all the nuances of IT work. Working with IT can be extremely frusterating and intimidating. Ammar does a brilliant job of showing you how to handle the thread as well as work with the conditions of the performance environment. Ammar shows what hook ups are out there and goes over some of the advantages and disadvantages of each. I really enjoyed this series and believe it is invaluable to all people interested in thread work.
Did this review help you? Do you want to respond to this review?

Very Good Report this review
Pro Privacy ON (login to see reviewer names) on April 7th, 2010
I bought the set to learn to use invisible thread and found that while some of the effects are tricky and the thread can be a real pain to use some are worth it. I am a real fan of the silk through microphone stand and the good news is this does not use the thread. If you like thread this is a DVD and series you will want as there are so many effects to learn. They can be a bit overwhelming at times. I struggle with the reset on many of these and when this is the case I tend to stop using the effect.
Did this review help you? Do you want to respond to this review?

Perfect! Report this review
Pro Privacy ON (login to see reviewer names) on April 3rd, 2010
This DVD's are perfect for those of us who want to perform magic anywhere. With great routines and explanations Michael Ammar lets you perform in no time. THe best thing is that you can create routines yourself and be a great magician in no time. Dont forget to include in your cart the invisible thread and the wax (putty) to create amazing effects and practice with this DVD.
Did this review help you? Do you want to respond to this review?

Extremely Helpfull Report this review
Verified buyer Pro Privacy ON (login to see reviewer names) on June 20th, 2003
I\'m a repeat customer here at penguin for obvious reasons and since my first order (the floating dollar effect) to my most recent i have procured quite a large selection of floatation devices methods and threads. Now since i own these i am a part of their forums. THE MOST commonly asked question in each and every one of these forums is How do I do this? Even with the instructions some are still confused. This set of dvd\'s is more than just enlightening it\'s inspiring. Everything is covered WELL and besides that there are routines in these dvd\'s you CANNOT BUY ANYWHERE ELSE it really is an amazing set i hope you decide to get it. P.S. And for you magicians out there who want it but can\'t afford it, all I have to say is start saving, its more than worth it, it\'s a bargain.
Thanks,
Tim
Did this review help you? Do you want to respond to this review?
Bestsellers