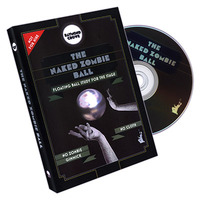 Today, when you order "The Naked Zombie Ball by Raymond Crowe - DVD", you'll instantly be emailed a Penguin Magic gift certificate. You can spend it on anything you like at Penguin, just like cash. Just complete your order as normal, and within seconds you'll get an email with your gift certificate.

Floating Ball Study for the Stage

Raymond appears at over 150 Corporate shows a year. His work has been featured on "World's Greatest Magic IV" and he received a standing ovation for his performance at the 2003 FISM. Classically trained in Mime, Raymond applies these techniques to the humble Zombie ball with some astonishing results - a complete routine for the Zombie using no Cloth and no Zombie Gimmick! Each phase of the routine is discussed in full detail.

Mini classes in Mime techniques are taught, such as Fixed Point and the showing of Weight.

This DVD is a must to anyone wishing to learn more about combining illusionary mime with magic. The routine is designed for stage/platform use but the principles taught here can be relevant to any performing environment.

"It's just great. I laughed really loud .... makes brilliant sense as an intro to doing the Z without a gimmick. I'd hate you if I didn't like you so much."
-TINA LENERT

"Imagine my surprise when I put in the DVD and discovered it was about the floating ball. I was hoping for naked zombies.......or anyone naked for that matter!

This DVD is absolutely brilliant! The routine is very magical and visually appealing. And the lessons are many, far beyond the ball itself. Most magicians don't give their movement a thought . You aptly demonstrate how effective a little thought, observation, experimentation, and rehearsal will go toward an outstanding effect. How "acting" and movement create an illusion instead of just a trick. You have provided perfect example of how attention to simple details can create something astounding.

One of the things that appeals to me most regarding magic, is not just "secrets", but beautiful, elegant, SIMPLE solutions for making the ordinary look extraordinary. The simpler the means, the more I love it. Anyone can dazzle people with a million dollar budget, topless showgirls and fireworks.........but it takes a brilliant mind to bring to life a simple idea and astonish people with it.

The production was also top notch. Everything was beautifully written, staged, directed and scored. The little silent movie and extras are also priceless.

"The Naked Zombie is a real fooler. Raymond Crowe not only fooled me in his performance, but while he was doing his explanation - he did it again. I was waiting for him to introduce a thread someway or other. When I think back I still cannot believe the illusion that he created with his body and hand moments. This is real magic. This is a thesis on theatre technique.

Even if I did not care for magic I would have loved the performance of the Naked Zombie. Great story, camera work, music and acting by Raymond."
-BEV BERGERON

"Your teaching section was masterful, I loved that you took each tiny little step and isolated it on its own, moving the viewer from subtlety to subtlety towards a fuller understanding of your performance.

You had a lot to pass along, and did well in giving an overview while cautioning the viewer to get a foundation in solid training before trying to perform the piece."
-WALT ANTHONY

"Raymond Crowe is a cutting edge thinker who takes the floating ball well over the edge with concepts and teaching guaranteed to make you a better Zombie manipulator."
-Jeb (Sable) Sherrill

Your Zombie can fly to the Highest Heights Report this review
Verified buyer Pro Privacy ON (login to see reviewer names) on September 25th, 2013
(This review is for The Naked Zombie Ball by Raymond Crowe - DVD)
I love this DVD. Now, I can take one of my favorite routines (which has bad reputation because so many people perform it incorrectly) and make it SOAR!.

Raymond Crowe is a genius and definitely someone to try to emulate. This DVD is Short but that is not a bad thing. He shows you everything you need to do. This DVD id NOT for someone that isn't wiling to put the work in.

If you can learn ONE thing on the DVD... and learn it well. I guarantee it will take your Zombie Act up a notch!
I highly recommend this DVD. Thank you Raymond for inspiring me to always try to do better.

Tommy Burnett
Psychological Entertainer
4 of 5 magicians found this helpful.
Did this review help you? Do you want to respond to this review?

Thorough & Engaging Report this review
Verified buyer Pro Privacy ON (login to see reviewer names) on November 6th, 2014
(This review is for The Naked Zombie Ball by Raymond Crowe - DVD)
This dvd provides all the information for you to learn the 'secret/s' of Crowe's routine and to also begin to play with a zombie ball without the use of the usual gimmick.

It might also serve as an introduction to learning to create illusions without any gimmicks...ie with only the body. Crowe does illusions with/without gimmicks: sometimes his body movements alone create the illusion/s and sometimes the object being manipulated is gimmicked. Being able to switch cleanly and seamlessly between the two is one aspect of Crowe's routine.

This makes for unusually strong magic illusions and is probably one reason this engaging, well-travelled and experienced Australian performer calls himself an "Unusualist"

Raymond Crowe (on this dvd) provides clear and detailed demonstrations augmented with clear and informative dvd camera angles, editing and sound quality. Crowe is a trained mime and - as a teacher - is also an excellent person to introduce the use of body movements/physical body awareness into the performing actions of magicians. Magicians are first and foremost actors.

Integrating Crowe's learnings into your routines may well be a long-term route/endeavor.
3 of 3 magicians found this helpful.
Did this review help you? Do you want to respond to this review?

Wonderful Report this review
Verified buyer Pro Privacy ON (login to see reviewer names) on August 9th, 2017
(This review is for The Naked Zombie Ball by Raymond Crowe - DVD)
The floating ball routine put together by Raymond Crowe is one of the most artistic and unique routines I have seen in forty years of performing. The DVD is exceptionally well done, both in explanation of the routine as well as the production value of the video. The short movie included in the DVD is a great addition and unexpected surprise.
1 of 1 magicians found this helpful.
Did this review help you? Do you want to respond to this review?

Very Happy with the DVD ! Report this review
Verified buyer Pro Privacy ON (login to see reviewer names) on December 5th, 2013
(This review is for The Naked Zombie Ball by Raymond Crowe - DVD)
Raymond Crowe's performance of the "Zombie" was/is impecable! Well worth the price even if I don't perform the Zombie "naked" . In the learning part of the tape he's very clear and easy to understand. Crowe also gives some nice ideas and suggestions.
1 of 2 magicians found this helpful.
Did this review help you? Do you want to respond to this review?
Bestsellers