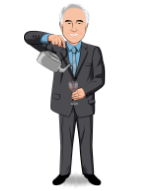 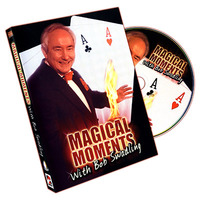 Today, when you order "Magical Moments with Bob Swadling - Volume 1 - DVD", you'll instantly be emailed a Penguin Magic gift certificate. You can spend it on anything you like at Penguin, just like cash. Just complete your order as normal, and within seconds you'll get an email with your gift certificate.

Bob Swadling, The Best Kept Secret in Magic, has been professional close-up magician for 16 years. He has performed at The Magic Castle and on The Stars of Magic in Hollywood, on TV Specials in Japan and also in Europe. He has been an advisor and technical consultant on many TV shows. He ahs won many top awards and is the owner of Swadling magic. He invents, manufactures, and performs his own brand of close-up magic.

Magic Moments With Bob Swadling Report this review
Verified buyer Pro Privacy ON (login to see reviewer names) on October 9th, 2013
(This review is for Magical Moments with Bob Swadling - Volume 1 - DVD)
I purchased The Magical Moments with Bob Swadling from Penguin Magic because I had previously purchased Bob's Box and was very happy with it. The Magical Moments with Bob Swadling was not just disappointing but a swindle. First there are many effects that all you get to see is Bob's performance but he does not provide you the explanation of how the effect is done so you cannot perform it yourself. Second he uses his "Power Pack" for many of the effects. The Power Pack" is available for 9.00 from Bob's website No mention of that in your advertising. Penguin doesn't sell it. I love magic and I buy a lot of it mostly from Penguin Magic. I am very disappointed now with Bob Swadling and I am very angry with Penguin Magic for selling such a rip off product to their loyal customers. I feel you both have put it to me on this one. I buy DVDs to learn magic from the masters not to go to a public magic show. I am a very unhappy customer.
1 of 1 magicians found this helpful.
Did this review help you? Do you want to respond to this review?

BRILLIANT Report this review
Verified buyer Pro Privacy ON (login to see reviewer names) on April 5th, 2015
(This review is for Magical Moments with Bob Swadling - Volume 1 - DVD)
Very visual eye-amazing effects !
It's true one has to invest more money to buy the tricks (such as power pack,gimmicked coins...).
For this low price you get the secrets of a master magician, great inventor.
Really worth it !
Did this review help you? Do you want to respond to this review?
Bestsellers