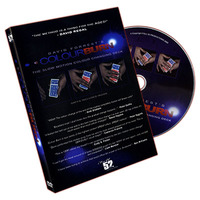 Today, when you order "Colour Burn DVD by David Forrest - DVD", you'll instantly be emailed a Penguin Magic gift certificate. You can spend it on anything you like at Penguin, just like cash. Just complete your order as normal, and within seconds you'll get an email with your gift certificate.

Imagine Changing the Colour of a Card Very Slowly, Piece by Piece, As You Rub Your Fingers Over It.

Imagine You Can Actually See The Card Change, Back and Forth From Red To Blue Under Your Fingers.

A blue backed deck is removed from its case. The deck is spread and your spectators are asked to call out the names of some cards that they see. You then take the named cards and, one by one, begin to magically change their back colour from blue to red! Offering a better look at the technique you announce that you will change the back of another card...

With a gentle wave of your hand, the card begins to visibly change. The card actually appears to change as you move your hand back and forth over it! You pause halfway - the card under your hand is half blue and half red! Slowly, you complete the colour change, visually changing the remainder of the blue card to red. The card is now fairly shown on both sides - it has completely changed to red!. But, you're not done...

With a snap of your fingers the entire deck instantly changes to red before their already disbelieving eyes. They pick their jaws up - you move onto your next miracle!

Colour Burn is a colour changing deck routine unlike any other. The effect plays exactly as described above and includes a stunning 'slow visual' moment where the back colour of a card is seen to change visually as you wave your hand over it. This amazing visual transformation is accomplished via a devilish gimmick, the details of which are fully explained in the download.

The gimmick has a multitude of uses, most of which are yet to be explored but as a special bonus, a second effect called 'PRINT RUN', is included in the DVD:

THE 'PRINT RUN' EFFECT: In slow motion, you magically PRINT a thoroughly examined 'blank both sides' card to match a selected card! No set-up. Do it anytime during your act. Card can be examined before and after.

With 'COLOUR BURN', The Possibilities are ENDLESS!

It's ok Report this review
Verified buyer Pro Privacy ON (login to see reviewer names) on April 2nd, 2010
(This review is for Colour Burn DVD by David Forrest - DVD)
I got this on a spur of the moment and I do like it but it's somewhat easy for people to figure it out if you don't do it flawlessly and it will take a while for you to get it looking good but if you put the time into it it looks amazing.
1 of 1 magicians found this helpful.
Did this review help you? Do you want to respond to this review?

Well but not for everybody Report this review
Pro Privacy ON (login to see reviewer names) on September 27th, 2010
(This review is for Colour Burn DVD by David Forrest - DVD)
effect is cool, look simple to do but i suggest this to medium-advance magician. have to be very carefull with card manipulation and so many times if you don't handle cards perfectly the trick can be revealed.
Did this review help you? Do you want to respond to this review?
Bestsellers