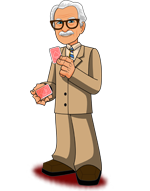 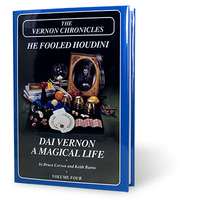 Today, when you order "Vernon Chronicles - Volume 4 - Book", you'll instantly be emailed a Penguin Magic gift certificate. You can spend it on anything you like at Penguin, just like cash. Just complete your order as normal, and within seconds you'll get an email with your gift certificate.

(1 customer reviews)
+ Add to Cart
Review Wishlist
In stock: usually ships within 24 hours!
Order in the next 1 hour 18 minutes and it will ship TODAY!
book
card
close-up
Tweet

This fourth volume of The Vernon Chronicles is a complete chagne of pace from the three thap preceded it. In the works since 1965, this enthralling anecdotal biography follows Dai Vernon from his birth to his coming to Hollywood's world-famous Magic Castle in 1963. As you read you will feel as if you are sitting with Dai at the Magic Castle while he shares the stories and experiences of his lifetime.

You will learn far more magic here than from any mere book of tricks as Dai talks about his "Attack on Magic", "Practice", "On Using Trick Cards", "Secrets", Effects Defined", "Shade", "Authority", "Great Tricks", "Classics" and "What's Wrong With Magic".

Dai describes the techniques he used to establish his world-wide reputation and introduces you to many legends of magic; his idols, such as the great Johann Nepomuk Hofzinser and Max Malini. His inspirations - Nate Leipzig, Dr. James Elliott, the Challenge Card Champion of the World, and J. Warren Keane. Many others including Harry Houdini, Jud Cole, Fred Keating, Jarrow, Cliff Green, and Tommy Downs; as well as such colorful and intriguing characters as Mr. Shock, The Mysterious Kid, Old Snakey Davis, "Slip the Jit" Harry, and Garnet Lee, the Chinaman's toy.

The story of the greatest natural magician the world has ever seen - the fantastic story of the man who fooled Houdini.

Dai Vernon still lives on Report this review
Verified buyer Pro Privacy ON (login to see reviewer names) on September 24th, 2017
(This review is for Vernon Chronicles - Volume 4 - Book)
I love everything I can find on Dia and these books are getting harder and harder to find. They are filled with great classic magic that has been tested for many years and taught by the master himself. Why buy one trick when you can have learn so many for the same price.
Did this review help you? Do you want to respond to this review?
Bestsellers