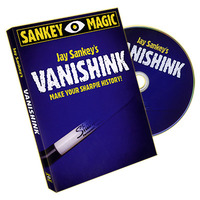 Today, when you order "Vanishink by Jay Sankey - DVD", you'll instantly be emailed a Penguin Magic gift certificate. You can spend it on anything you like at Penguin, just like cash. Just complete your order as normal, and within seconds you'll get an email with your gift certificate.

With VANISHINK you can make your Sharpie vanish into thin air whenever and wherever you want!

Without pulls or palming and with your sleeves rolled up. You can even use the clever VANISHINK gimmicks in the nude (though we're not sure exactly what kind of show that would be!)

VANISHINK comes complete with everything you need to make your Sharpie marker VANISH again and again including an official Sharpie brand marker and a full-length instructional DVD featuring incredible effects and handling for all performance situations!

Jay includes his friend Mike Skutt's killer handling for the Vanishink gimmick. This is the handling that, to quote Jay "is a truly ingenious combination of sleight-of-hand and sleight-of-MIND!"

1.FLIP'S VANISH: The most visually stunning vanish of a wand, marker, pen and pencil ever created! Truly beautiful!

3.THE PEN IS MIGHTIER: A super commercial 'sucker' routine that ends with the marker cap permanently STUCK to the end of the maker! Guaranteed to give even in the strongest spectator a STROKE!

Way overpriced Report this review
Pro Privacy ON (login to see reviewer names) on August 28th, 2011
(This review is for Vanishink by Jay Sankey - DVD)
Overpriced. This effect should be ten dollars based on what you get. In addition its good, but not as good as you think.
3 of 3 magicians found this helpful.
Did this review help you? Do you want to respond to this review?

great gimmick Report this review
Pro Privacy ON (login to see reviewer names) on April 4th, 2010
(This review is for Vanishink by Jay Sankey - DVD)
i love this gimmick. bought this from sankey magic a while back and have enjoyed using it in almost any routine where i use a regular sharpie...on the dvd, jay gives numerous options to use the gimmick, but for me if i have someone sign a bill with a sharpie, then make the sharpie dissapear..nothing more powerful
2 of 2 magicians found this helpful.
Did this review help you? Do you want to respond to this review?

Overpriced Report this review
Verified buyer Pro Privacy ON (login to see reviewer names) on October 6th, 2016
(This review is for Vanishink by Jay Sankey - DVD)
This is not a bad trick, but the "gimmick" is super simple and very easy to make. When you open it you will be very dissapointed that you bought this.

DVD is good but short.

There are much better tricks out there, think long and hard before buying it.
1 of 1 magicians found this helpful.
Did this review help you? Do you want to respond to this review?

Great! But not for me. Report this review
Verified buyer Pro Privacy ON (login to see reviewer names) on February 25th, 2014
(This review is for Vanishink by Jay Sankey - DVD)
Let me make something very clear. This is an amazing effect! Just like me, when you open the package up your going to be like " You got to be kidding me. Really! This will never work." However don't let that fool you. I rated this 5 stars because it really is a awesome effect. However, it just personally doesn't fit my style of magic. Thats the only reason I regret buying it. But thats a personal thing.
I think you'll like it!
Did this review help you? Do you want to respond to this review?

My first reaction was like...what? Report this review
Pro Privacy ON (login to see reviewer names) on July 13th, 2011
(This review is for Vanishink by Jay Sankey - DVD)
When I first opened up my set and saw the gimmick, I thought to myself...omg, this will never work. However, after watching the DVD and learning the handling, I think this has great potential to really fool. I have to admit, when I saw the trailer, I was absolutely fooled so I think this has great potential.
Did this review help you? Do you want to respond to this review?

Vanishink! Report this review
Pro Privacy ON (login to see reviewer names) on April 6th, 2010
(This review is for Vanishink by Jay Sankey - DVD)
This is a GREAT, GREAT effect. If that is how I start out the review, you should go ahead and buy it.

This is a SUPER clever idea, and one that is completely effective. Basically, during any performance, you can completely vanish a sharpie. This is a utility in of itself if you have ANYONE sign something during your performance.

The other cool thing is on this DVD, there are MANY handlings provided. It is ridiculously easy to find one that is right for you, and personally, I think this DVD was way under-priced.

Recommended.
Did this review help you? Do you want to respond to this review?

Vanishink Report this review
Pro Privacy ON (login to see reviewer names) on April 4th, 2010
(This review is for Vanishink by Jay Sankey - DVD)
The effect is very startling and very easy to do. When you open the DVD case and see the gimmicks you might think "Huh? No. I will never perform this". You might leave it in you drawer and forget about it. Maybe a few weeks later you'll go and try it. Then you will see the power of this effect. As three bonus items, Jay teaches the Flipstick vanish, a multiplying marker routine, and one where your spectator (or heckler) can't get the cap of the pen. Very fun to perform and recommended.
Did this review help you? Do you want to respond to this review?

I like it Report this review
Pro Privacy ON (login to see reviewer names) on April 3rd, 2010
(This review is for Vanishink by Jay Sankey - DVD)
This is one of the coolest effects that Jay has come out with and the gimmick is amazing. Even though it looks dumb it fools everybody that I've performed this for. The DVD menu is easy to follow and the effect itself is really cool.
Did this review help you? Do you want to respond to this review?

Vanishink Report this review
Pro Privacy ON (login to see reviewer names) on April 2nd, 2010
(This review is for Vanishink by Jay Sankey - DVD)
Hey guys. I was lucky enough to attend Jay Sankeys lecture in Manhatten on Saturday night. While there, Jay pulled out his sharpie which was JUST USED, And vanished it without the use of sleeves or anything like that. Then he went into the explanation and inspiration talking about the original gimmick and what it used to be. I was convinced this was it and was saying What a cheap method lol. Then he pulled from his case The REAL Gimmick. I basically dropped in disbelief. Talk about a clever trick.

DIFFERENT PERFORMANCE OPTIONS 5/5 Jay showed us this trick almost surrounded 360. He did it with people on all sides of him except behind him and EVERYBODY was floored with this. On the DVD, Jay shows you different venues and ways you can present this such as a bet, stage or platform, walkaround, school, or even sitting or standing in a bar or wherever you want and be basically angle covered. It is THAT good. But you (fortunately) need to use Mike Skutts handling of this, Which is the one you see on the performance with the cap. Jay originally did this with this gimmick without the removal of a cap and it looked good but Skutt did it better. Just letting you know that you can perform this almost 360 if you really play with it for a bit.

THE GIMMICKS 4/5 When I say Gimmicks, I mean Gimmick as in, One. singular. But when you open this DVD, I GUARENTEE, you will basically fall out of your seat. You will see this and think back to the video and saying It was a real marker! (Thats what you will remember) But then it will all piece itself together for you. This DVD comes with gimmicks but only one is used in the actual performance unless you want to do it with people on all sides of you. But you will eventually run out of this special Prop and need some more which will cost you about 5 cents each time. So spend about a dollar and you can have around 100 performances. Each time you do the trick it will cost you like a penny. I also want to mention that he included a sharpie marker as well to match the gimmicks.

THE DVD 4/5 I found this DVD to be very short in length. He basically goes over the gimmick and inspiration then the overall explanation then diferent ways to do it as well as Skutts handling and the bonuses and extra tips. But Jay did do a fantastic job with this DVD in teaching and all that. I also liked the backround of it all. It seemed different to me. My favorite trick of it all though was when he removed the cap and clipped it to his pants and made the marker vanish and then appear inside the cap.

THE BONUSES 5/5 Now Jay went into the performances and explanations to each of these effects. Remarkerable is essentially a really good way to remove a sharpie and then split it into 3 sharpies one at a time. It is really cool and pretty easy to do in the right situations and could serve you some good usage. He explaned this fairly well. The next was flips vanish which we probably all know already. He went into great detail on this vanish and how to make it work for you and really be a professional piece of magic in any routine incorporating a sharpie marker. The sword is mightier is probably the best idea out of this entire DVD (Other than the trick itself lol) But this really isnt anything new. He did the same thing basically in another one of his videos as well as in a book I believe. I forget the name but you can probably dig it out somewhere here on penguin. It was an older video. But still a REALLY nice trick you can do with VANISHINK and I probably will do with the betcha handling since this uses that premise and really wouldnt work good without it.

OVERALL 4/5 The reason it didnt get a 5 is because it was kind of a short video. But everything else was perfect. I can tell you now, You will probably never figure it out from watching the demo. Jay is an all around nice guy and a really good magician. I got a picture with him and an autograph. Just buy this now. ALL your thoughts about it will vanish when you see what you get.
Did this review help you? Do you want to respond to this review?
Bestsellers