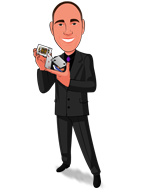 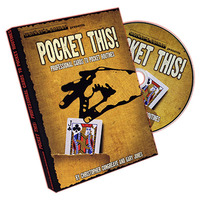 Today, when you order "Pocket This by Christopher Congreave and Gary Jones - DVD", you'll instantly be emailed a Penguin Magic gift certificate. You can spend it on anything you like at Penguin, just like cash. Just complete your order as normal, and within seconds you'll get an email with your gift certificate.

Pocket This by Christopher Congreave and Gary Jones - DVD

GJ 6 Cards to Pocket (Gary Jones' signature routine)
Many magicians have been trying to get Gary to release this routine for years. Now he's finally sharing it with the magic community.

The cards, a signed ace to six, all vanish individually and appear in order in the magician's pocket. Gary Jones has been using this routine for many years, but this is arguably the best version of this classic. It can be performed close up, cabaret and parlor.

CC Cards to Pocket
The signed ace to four vanish one at a time. The first three appear in the magician's pockets, the final card vanishes from inside the spectator's hand and appears inside the magician's wallet (which has been on the table all along!) Highly Commercial.

GJ Pocket to Pocket (incorporating Gary's Ambitious Card)
A fantastic sequence that is stunning on its own or you can add to any ambitious card routine, your spectators won't believe their eyes!!!

GJ Repeat Signed Cards to Pocket
3 cards are selected and signed. One at a time they appear in different pockets, then as quick as a flash they instantly jump straight back to the pockets. Excellent!

Top Con Control
A new, easy and deceptive way to control a card to the top of the pack.

John Carey's inspired by Lance (performed by Christopher Congreave)
4 kings are placed onto the table and a signed card placed in between them. The signed card vanishes from between the kings and appears in your pocket. Again, you show the cards but this time the cards are isolated in the spectator's hand. BOOM!! Under these impossible conditions the signed card again vanishes, and makes it appearance back to your pocket. Commercial magic at its best.

Bonus: GJ's No Sleep Plus - A brilliant transposition routine. I don't want to spoil the surprise!

No Report this review
Pro Privacy ON (login to see reviewer names) on May 13th, 2016
(This review is for Pocket This by Christopher Congreave and Gary Jones - DVD)
Bad. Bad camera. Bad brit humor. Uninteresting. Hard to follow. Rushed. Unclear.
What else do you want to know?
Did this review help you? 2 comments
Bestsellers