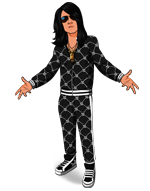 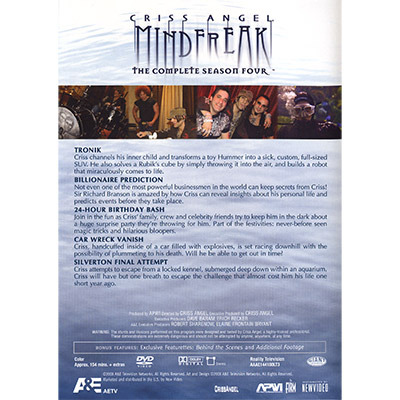 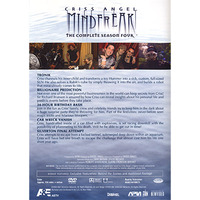 Today, when you order "Mindfreak - Complete Season 4 by Criss Angel - DVD", you'll instantly be emailed a Penguin Magic gift certificate. You can spend it on anything you like at Penguin, just like cash. Just complete your order as normal, and within seconds you'll get an email with your gift certificate.

The hit A&E series CRISS ANGEL: MINDFREAK once again stretches the boundaries of reality and belief in this thrilling fourth season. Criss Angel's incredible illusions, death-defying escapes, fearless demonstrations and astonishing physical feats have made him the first ever five-time back-to-back recipient of the Magician of the Year award. His visionary approach to the art of magic rejects the traditional confines of the craft and gives birth to an edgy new brand of modern mysticism. In this fourth season, Criss Angel tackles feats that defy the laws of nature. Highlights include a live broadcast of his escape from a building seconds before it implodes, walking across Nevada's Lake Mead, being cremated alive, walking through steel and inviting skeptics to join in on a deadly challenge in which one wrong move could cost Criss his life! Each episode will leave you baffled as Criss Angel executes the most innovative magic ever seen on television. Now, experience all 18 death-defying episodes for the first time on DVD.

BONUS: Featurettes: Behind the Scenes and Additional Footage

Official B_Magic review! Report this review
Pro Privacy ON (login to see reviewer names) on April 6th, 2010
(This review is for Mindfreak - Complete Season 4 by Criss Angel - DVD)
Hi. This is your official PenguinMagic reviewer, B_Magic.

The Mindfreak series, especially the first few seasons, are enjoyable to watch for the most part. Keeping personal feelings about Criss Angel's magical talents aside, I think it was fun to watch the series and to get a look at what laymen are watching and comparing other magicians to. At the very least, I found it educational to know something about the show and to have something to reference when spectators I perform for bring him up.

Is his show going to knock your socks off? Probably not. In fact, he may well make you mad! LOL. But I found the show to be something fun to do when bored, and has better helped me to relate to my audiences. And, I daresay, I may have learned a little something about self-promotion and presentation by watching.

WARNING: THIS SEASON IS BY FAR THE WORST OF ALL IN MY OPINION. CRISS GETS WEIRDER AND MORE FAKE.

B_Magic
1 of 1 magicians found this helpful.
Did this review help you? Do you want to respond to this review?

Entertaining Report this review
Pro Privacy ON (login to see reviewer names) on April 7th, 2010
(This review is for Mindfreak - Complete Season 4 by Criss Angel - DVD)
Criss Angel is doing what many would aspire to do. He has taken A&E by storm and it is amazing how many people ask if you like him when they see you perform. He is very good and has a style all his own like it or not. The seasons are very entertaining and provide perspective when watching him perform. If you like Criss Angel you will want the Mindfreak Seasons at your finger tips.
Did this review help you? Do you want to respond to this review?

YEA! Report this review
Pro Privacy ON (login to see reviewer names) on April 5th, 2010
(This review is for Mindfreak - Complete Season 4 by Criss Angel - DVD)
Criss is the man! He has already done 3 seasons before this one and still manages to come up with more amazing ideas. He has gone backwards since season 3 though this is still worth watching and defiantly not my least favorite season. His famous walking on lake illusion is in this season and is a lot better the the pool one in season 2.
Did this review help you? Do you want to respond to this review?

Hope you enjoy Report this review
Pro Privacy ON (login to see reviewer names) on April 2nd, 2010
(This review is for Mindfreak - Complete Season 4 by Criss Angel - DVD)
The only reason for get the Season 4 would be if you actually watched every episode when A&E aired it,
and you fell in love with it.
If you haven't started out this way, go back to Season 1 and start chronologically from there.


Four episodes really stand out for me in this season:

Walk on Lake - The scenery was really beautiful, and the fact that he went further with his Walk on Water theme came out with some amazing results.

Building Implosion Escape - You had to watch this live to really appreciate it. I really thought he was dead when that building went down. My heart was in my throat and I was insane while the whole thing was happening. It scared the dingle berries out of me. I still get chills watching it, even now, because I know how I felt while it was happening. I reflected quite a bit after this episode and it was an eye-opener for me.

Car Wreck Vanish - This episode would have been just as scary, if not more so, then the Building Implosion episode if it had been live. It was the first time an episode of Mindfreak ended on a scary note. Even though these episodes were mainly pre-taped and they weren't taped in the order that they were aired, this episode caused Criss to have to post a response on his Myspace page as to his safety, it caused so much chaos.

Silverton Final Attempt - Anyone who follows Criss' career knows that he doesn't have luck with underwater demonstrations. He tried Silverton once before in Season 3 and he was forced to cancel right before the event. It was almost humbling to see him wrestle with his demons here and to come out conquering them. It wasn't just humbling - it was inspiring and touching. This episode was almost as organic as ones in his previous seasons that it was almost out of place here.

Season 4 is far from being bad. However, it pales to every other season he has done thus far. He is the one who makes this show, and he's missing pieces of himself.
Did this review help you? Do you want to respond to this review?
Bestsellers